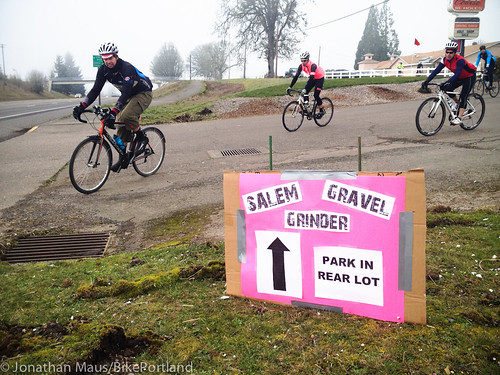 Riders embark on a 50-mile loop of dirt and gravel farm roads west of Salem.
(Photos by J. Maus/BikePortland)

I still don’t who organized last Sunday’s Salem Gravel Grinder ride; but I think that’s somewhat by design. The ride is part of a growing trend of unsanctioned, unpermitted group rides where the participants expect nothing more than a good route, good company, and a good adventure.

By that measure, Sunday’s ride (also known as “Oregon’s Perry Roubaix”) was a great success.

The ride started at around 10:00 am from the parking lot of the Oak Knoll Public Golf Course just a few miles west of Salem. To make things a bit more interesting, I decided to ride down to the start (about 70 miles from north Portland). On my bike by 5:00 am or so, I rode the first few hours in the dark and enjoyed almost complete solitude as I pedaled through Milwaukie, onto the Trolley Trail, then up-and-over the hills of Oregon City and into the Willamette Valley. The sun just starting peeking as I rolled through farm roads south of Oregon City. 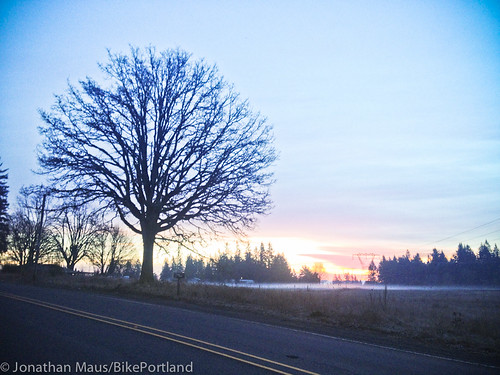 When you’ve already been on your bike for two hours before the sun rises,
you stop to remember it.

Once my route connected with the Willamette Valley Scenic Bikeway, and just about 12 miles or so north of Salem, I was joined by a group of riders who had also set out from Portland that morning. It was a group of Lazy Tarantulas. I had the good route, and now some good company.

As we rolled into the golf course parking lot, folks were prepping their bikes and bodies — and there was quite a wide variety of both. Turns out that a mostly-gravel, 50-mile loop with 2,500 feet of climbing on remote farm roads has appeal for people of all ages and bicycling persuasions. There were people on knobby-tired mountain bikes, a trio of tandems, roadies in matching team kit, people riding with backpacks and saddle bags, and everything in between. 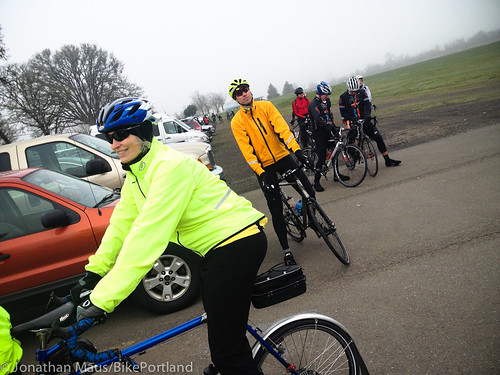 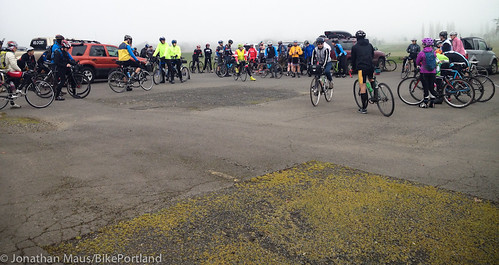 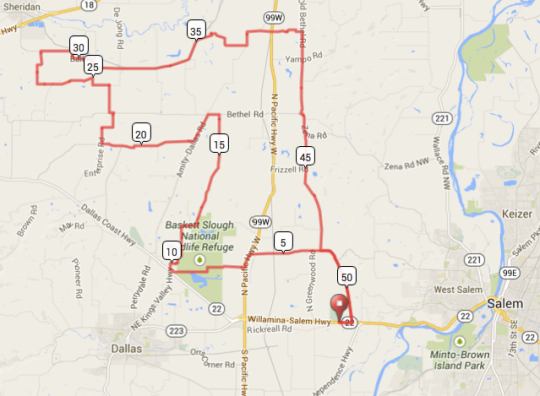 The route. Get the details at RideWithGPS.com.

After some brief remarks from the guy who mapped out the route and “organized” the ride, we set out.

The route did not disappoint. The entire loop stayed away from any towns or developed areas. We passed only wineries, wildlife, cemeteries, old churches, barns and farmhouses. Much of this area was settled by the first Oregonians in the late 1800s. Atop one of the day’s steepest climbs, Pleasant Hill Road, was the Pleasant Hill Pioneer Cemetery. When I pulled over to check it out, one of the riders was chatting with an older man in coveralls. Turns out the man’s direct relatives were the original homesteaders who settled the area with a land grant from the U.S. government in the 1850s. 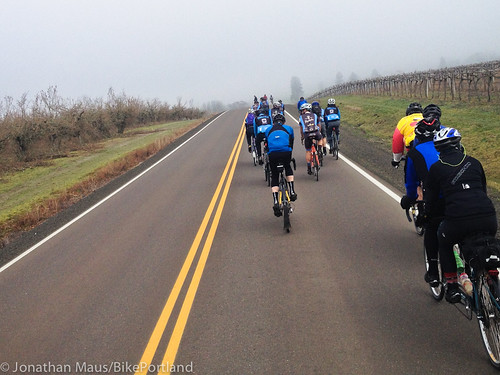 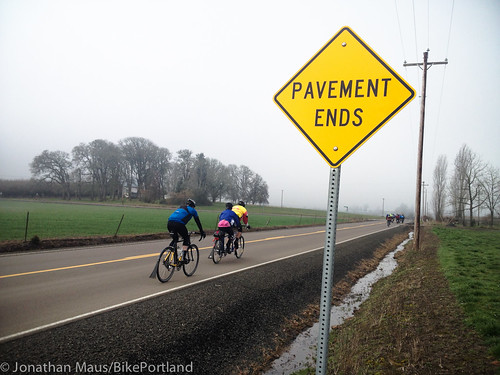 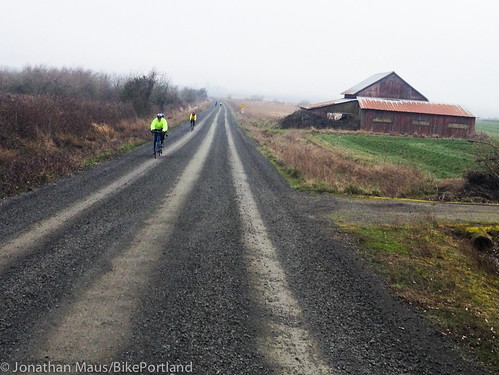 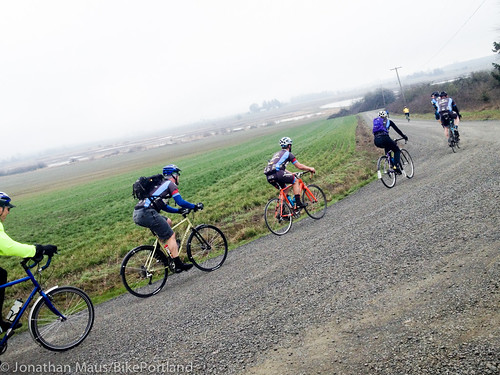 The hills were covered in a blanket of perfect green grass dotted by old oak trees. Add the sun, clouds, and blue skies to the mix and it was like riding through that old Windows XP screen saver. 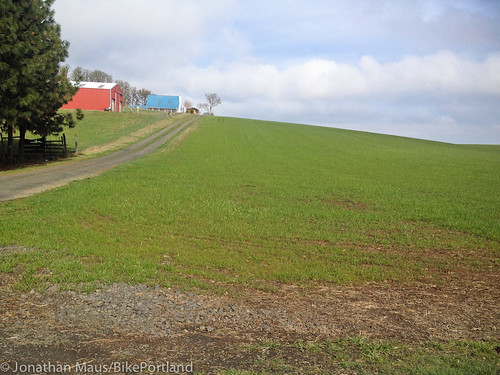 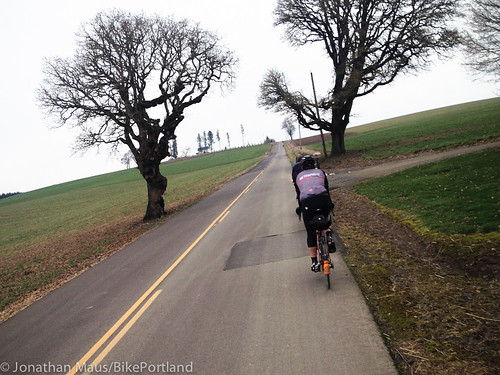 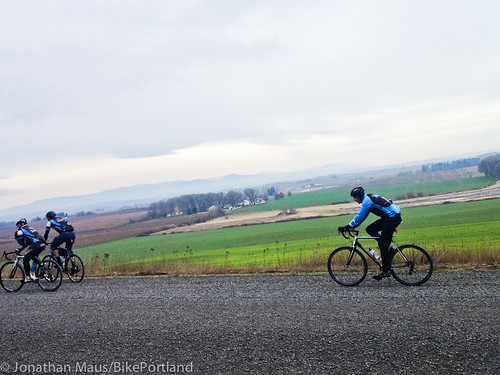 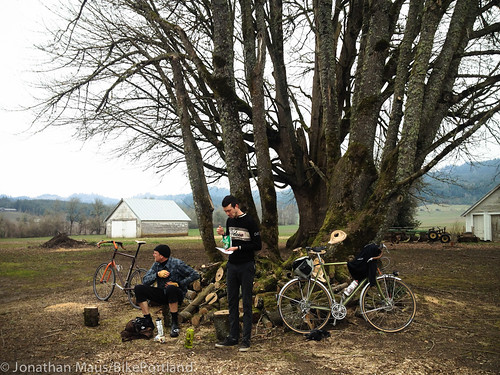 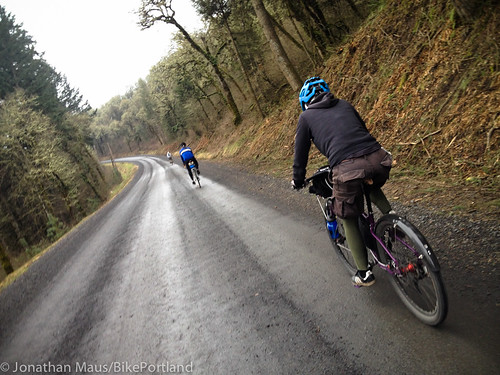 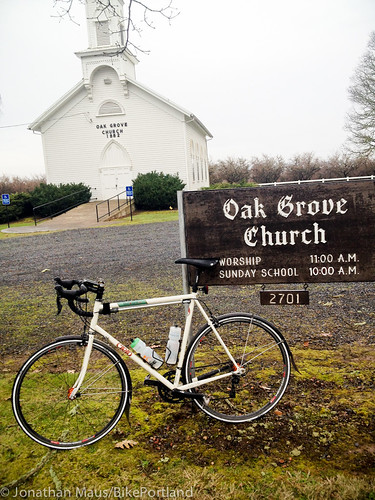 One of many unexpected treats of the route was the Baskett Slough National Wildlife Refuge. I never knew it existed before riding through it on Sunday. We were welcomed into the refuge by a massive flocks of birds that made their presence known with a display that was an audio-visual treat. 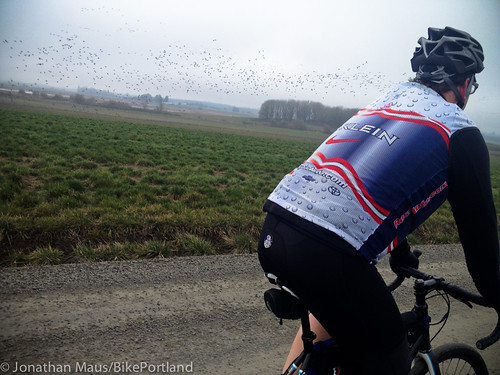 That’s not gravel dust, those are birds.

And since folks are always curious what type of bikes are being used on these gravel adventure rides, below are just a few I snapped a photo of: 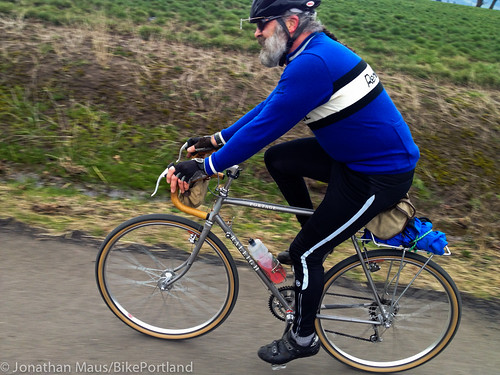 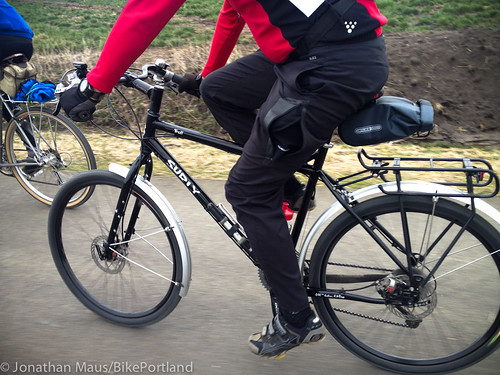 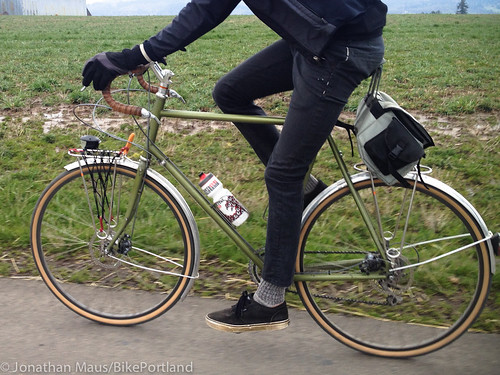 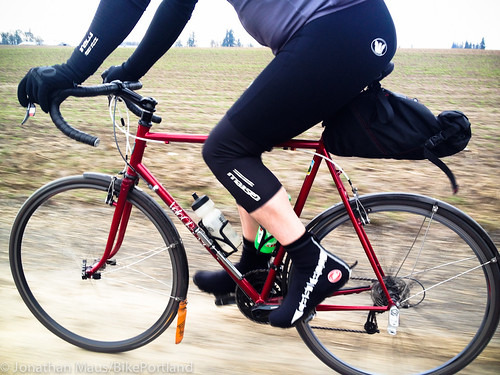 Rain began to fall toward the end of the ride as we made our way back to Willamina-Salem Highway. With just a few miles to the end, steady rain falling, 110 miles in my legs and a day marked by punctures (11 of them!), I was beginning to mentally shut things down a bit. Ahead at the golf course I had a ride back home in a friend’s truck all set up (thanks for the offer Sky!).

But just then I saw two familiar faces riding in the opposite direction. It was Geoff and Nick, two guys from the group who I met on the ride down to Salem. They were headed back to Portland on their bikes — something we’d talked about as an option earlier in the day.

Should I join them? Could I make it back? I flipped a u-turn to join Nick and Geoff and spent the next few seconds doing a mental checklist: Do I have enough food and water? Do I know a route back to Portland? Do my lights have any charge left? Will Juli be cool with me missing dinner? After all those questions came back positive, the final deciding factor was that — no matter what happened in the next 70 or so miles — I would have the company of two very nice guys to tackle it with.

Without knowing a perfect route home, north of Dayton we ended up riding in the gravel and debris-strewn shoulder/bike lane of 99W for most of the way back. Riding 99W through Dundee, Newberg, Sherwood, King City, and Tigard wasn’t exactly a good route, but I had good company, and it was definitely a good adventure.

Finally a picture of me on BikePortland. About time!

Total miles on the day, Jonathan? By my count you must have ridden like 180!!! Wowza.

Very fun route – thanks to whoever did(n’t) organize it.

Well done Jonathan. The 180+ miles is a very respectable adventure. Thanks for sharing the story.

So, what was the route? I used to ride a lot in West Salem; wondering whether there were any sections I would be familiar with.

Heh. Yep. You rode right past a farm my brother and I both worked on from time to time–a long time ago…

Jonathan, you are a beast – riding the last ~50 miles in a February rain, no less!

Bike maps that shows this area (though it cuts off the ride start), and much of NW Oregon, can be found here – see Map 7:
http://www.portlandoregon.gov/transportation/index.cfm?c=36638&a=316792

wow that route is awesome!

that’s just great. thanks for sharing…I wonder why so many flats?

I used tires that really aren’t right for the conditions we encountered. I shared all the details in a note below Scott Kochers review of the tires we posted yesterday. Read the full explanation here.

11 flats! Jonathon, you are a patient man.

Phillip with the Beard

I saw you at flat 11 in my orange Sag Wagon; I hope the new tube and scabs helped out buddy. PLUG: Sellwood Cycle would love to put a pair of Clement USH’s on that steed for The Dalles 60…….

Jonathan Maus (Publisher/Editor)
Reply to  Phillip with the Beard

You really saved me with that tube. I was just one patch short after all those flats.

And I’d love to do the Dalles Mtn 60. I’ll be at the National Bike Summit all week and not back in Portland until Thursday night so not sure I can make it out this year. We’ll see!

As for the USH. My Cielo can only fit up to 32mm so not sure I can use them.

Cheers and see you around.

Jonathon, it was nice to meet you on the ride. Having you pass me 5 times was a little weird!

You too Pounder. That felt weird to me too. I was initially trying to catch back up with some larger groups so I could chat with folks and get better photos with more subjects. Hope you enjoyed your ride.

It kicked my butt, and I liked it. First ride on the new bike, what a way to break it in! Next up is the Dalles Mtn 60. Are you going?

Inspiring article! I live in Salem and I didn’t know about this ride. It’s pretty ironic that I learned about a ride in my hometown in Portland publication! 🙂

A brief and much less complete recap than the one above, as well as a few pictures.
http://metropoliscyclerepair.blogspot.com/2014/03/perrys-revenge-aka-willamette-valley.html