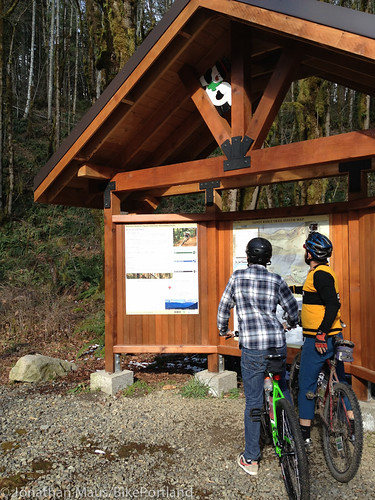 The Sandy Ridge MTB Trail System is one of the Mount Hood area’s many bright spots.
(Photo: J.Maus/BikePortland)

“We are tourism-driven,” said George Wilson, a director of the Villages at Mount Hood and the organizer of the event. “It’s our only industry.”

It’s also an industry that currently booms each summer and winter and slackens during the “shoulder seasons,” as fall and spring are sometimes called in the Mount Hood area. 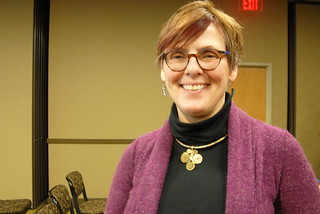 Clackamas County’s Jae Heidenreich has reviewed the
numbers and decided that biking is among Clackamas
County’s most promising sources of new tourism.
(Photos by M.Andersen/BikePortland)

“That’s the nice thing about biking,” said Jae Heidenreich, development lead for Clackamas County’s tourism office. “It really is three seasons of the year rather than just one season of the year.”

Actually, the growing popularity of fat bikes mean that they could be a four-season activity, said Nathan Jones, owner of Portland bike shop Ride Yr Bike. Jones rode the bus to Saturday’s meeting to push the idea.

(“They’re so fun,” a state tourism promoter in the audience whispered to the man beside her, a lanky Clackamas County transportation official. “I want one so bad,” he replied.)

With that multi-season strategy in mind — and their eyes on the recent success of Hood River and Oregon City at developing lucrative reputations in the world of bike tourism — the state, county and local governments here, 45 miles southeast of Portland and about 1,000 feet up, are focusing their resources on their share of an estimated $400 million in statewide bike tourism revenue.

The county is installing “share the road” signs along bike routes like Barlow Trail, Marmot Road and Lolo Pass Road. The county’s tourism office awarded five of 10 recent grants to “bikey” projects, Heidenreich noted, and it’s begun offering free trainings to retail staffers in the area on what to tell people who might ask them where the good bike destinations are nearby. 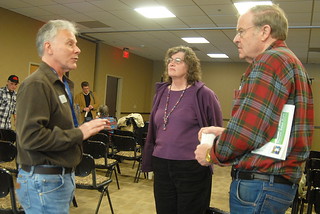 Mike Bezner, the county’s transportation engineering manager, said Saturday that the county is working hard to make its roads safer for all users.

“We actually have a goal of reducing fatalities and serious crashes in Clackamas County by 50 percent over the next 10 years,” Bezner said. “It’s ambitious, but we are serious about it.”

The new focus on bike tourism comes as talk is growing in Clackamas County that the area seems to be in the midst of a major demographic shift.

“Early in the 90s, we had a lot of young people and families,” said Marci Slater, another director of The Villages, which is the quasi-city government for the Welches area. “Now we’re becoming a retirement community. So we have more pedestrians on the roads, more bicycles on the roads.”

Even bus traffic has been rising. As we shared earlier this month, the newly expanded Mount Hood Express now runs 363 days a year, five to seven times per day, between Sandy and Timberline Lodge with nine stops between. The area’s hope is to create, among other things, a perfect way to quickly and cheaply get bikers and skiers up the mountain.

“We’re becoming a retirement community. So we have more pedestrians on the roads, more bicycles on the roads.”
— Marci Slater, The Villages at Mount Hood

With $2 fares each direction, it’s one of the fastest-growing transit services in the state, administrator Teresa Christopherson said Saturday.

Staj Pace, a destination development specialist for Travel Oregon, made a pitch Saturday for the new program, piloted in nearby Estacada and launching statewide Tuesday, that will create a free “bike-friendly business” network that gives shops credit for amenities like indoor bike storage or on-site bike maps.

“Thirty-one percent of all leisure visitors to Oregon rode a bike at some point during their stay,” Pace said.

Stay tuned for more details on the bike-friendly business program later this week.

Wilson, a resident of the area for 14 years, said his new advocacy group, the Mt. Hood Bicycle and Pedestrian Coalition, will focus on improving the trails and on-street routes for biking.

His dream, he said, is for the Mount Hood area to grab a share of all the traffic that speeds past on U.S. Route 26 en route to places further away.

“Those travelers have decided where they’re going to go before they leave their home,” he said. “They’re going to Bend, Hood River. … The money that’s out there now, $400 million for the state of Oregon – we’ve got to tap into that.”

Correction 1/26: An earlier version of this post misquoted Pace’s statistic about bike use by Oregon visitors.

Thanks for the nod, FYI it’s Ride Yr Bike! 🙂 They sound like they are getting things geared up pretty well for bikes up there, I hope the progress can accelerate. It would be really cool to see fat bikes as recognized trail users and see the infrastructure there to support them in the Hood area. It may be a long shot but hopefully in due time!

Thanks, Nathan – sorry about that. Fixed.

/sarcasm. Actually, this is still a good thing. There’s still plenty of singletrack – not to mention good paved and dirt roads – around Mt Hood for everyone. With the very painful exception of the Roaring River/Serene Lake area, many of the trails that were closed either weren’t that great or were so overgrown as to be unusable, as I learned when I spent several weekends exploring those trails when the wilderness proposal was first floated.

The accompanying photo is a bit off putting. It looks like the temps and the snow are on the edge of thawing and turning into a quagmire.

The last thing I want to see is this new set of trails turn into the mess that is Hagg Lake.

I was lucky to have worked on a private set of trails where access was controlled. In over 5 years not one trail rutted out and required rebuilding. All efforts went to expanding the number of trails and adding technical features.

Looks like they swapped out the accompanying photo of riding on snow covered trails.

uh… that was the paved road to the upper trail heads and kiosk at Sandy Ridge. Maybe a vehicle with those pathetic studs could cause damage, but a mtb will not harm the asphalt.

The original photo was of mtb’s on snow covered trails.

Nope, it was the paved road that you climb to get to the top of the trail system.

So what constitutes mud?

Is it any wet dirt? When you sink in?

I don’t mountain bike much, and have not built trails. I was at Powell Butte last week where it seemed pretty good, until I turned a corner and encountered a quagmire. (I don’t know if that was just bikes, or someone tried to drive a truck through it. It would have been axle deep).

We considered it time to stop riding once you started to leave tracks in the trail. That meant the surface was absorbing water and you were damaging it. It doesn’t take much after that to keep churning more and more dirt into the mix. Then you end up with what was once a single track turning into a multi-lane highway as more and more riders keep riding around the mess and just making it worse.

I switched out the photo as you’ve noticed. I don’t like the photos to distract from the point of the story. So I switched it. thanks.

Trail maintenance is a big issue. Sandy Ridge is a great resource, and NW Trail Alliance does great work, but that work can be quickly destroyed if people don’t ride responsibly. A possible article in this??

I’m glad to see this happening. It’s good to see some recognition that there are a lot of missed opportunities to really develop some recreation in the Mt. Hood area.

Shoulder season is when riding bikes is best- especially fall
Sandy Ridge seems to be a year round spot this year
Bring more trails and amenities and infrastructure
Govy needs a bike shop- ski shop combo
What’s up with the T-line bike park?
I’d like to hear about how the mt hood hut system is doing as well
Bring it!!!
Tom Kloster’s wyeast blog has several good articles- proposals for utilizing old logging roads and creating backcountry biking destinations – one is for the rd 44 area and the other is up near whatum lake I believe
A few biker oriented forest camps with small shelters and firewood would be nice too

How about one campground on the east side of Mt. Hood that has water for drinking! Carrying a water pump is great, but there is no reason why the campgrounds off of Hwy 35 and FR 44 should not have access to drinkable water. Funny to be riding around the Dalles Watershed all day with no potable water anywhere. Imagine, like Oakridge, being able to spend the day riding in the forest with two water bottles instead of 100 ounce bladder on your back. Please return the Roaring River area to the folks who actually utilize it!!!

Given the lack of snow this Winter, cyclists and their dollars will be needed even more. Yesterday I rode at Sandy Ridge and both lots were totally full. I had to park on the shoulder of the road, along with about a dozen other cars. Such a rad, positive atmosphere out there with mountain bikers of all experience levels riding together. My only question, when will I be able to buy a beer and burrito in the lot after my ride?
And what is up with the Timberline Bike Park? I would love to hear an update, if possible.

Did I miss something? What’s going on in Oregon City?

Oregon City is coming into their own! First City Cycles is owned and staffed by community-driven, bikey-loving folk. One of their projects getting close to launch is the First City Bike Bistro, located in the historic OC train depot. Check these Intertwine Trail Notes for details: http://theintertwine.org/snagtags/trail-watch

Oregon City Trail Alliance (OCTA – meeting tonight) is also in pursuit of cleaning up Newell Creek Canyon for potential riders. Tourism has also supported a feasibility study for a jump park at Meldrum Bar (Gladstone, not OC – but close!).