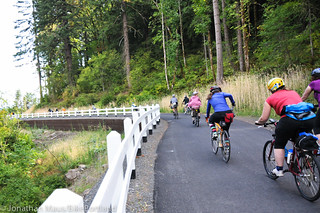 The momentum to complete the remaining 10 miles of the Historic Columbia River Highway State Trail — a route that will ultimately provide a pleasant bicycling connection between Troutdale and Hood River without ever forcing riders onto Interstate 84 — got a major boost on Friday. In a unanimous vote, the Oregon Transportation Commission (OTC) approved a resolution (PDF) that puts the project atop the Department of Transportation’s priority list.

The resolution calls for ODOT to fund and construct the final segments and called it, “a project of statewide and national significance.”
This is just the second time in ODOT history that a non-auto/highway project has been given such a high level of official endorsement (the other one was the Oregon Coast Bike Route in the early 1980s). The resolution has major implications and will help ODOT and project proponents secure the final $32 million needed to finish it.

“I think local communities are seeing the value of cycling in the Gorge. There’s a huge upswell of support.”
— Kristen Stallman, ODOT

Kristen Stallman, ODOT’s Columbia River Gorge National Scenic Area coordinator, says this resolution gives the project a crucial “step up” when it comes to making requests for state and federal funding. “To have the state’s highest body saying this is an important project… That’s a strong message as we apply for grants. It really sets this project apart and hopefully opens the door for funding.”

Here’s an excerpt from the resolution:

3. The State of Oregon, local governments, and private citizens have collaborated to leverage significant funding for improvements such as the recently completed John B. Yeon to Moffett Creek Trail Project. For the first time in 77 years, Oregonians now are able to ride their bicycles from Cascade Locks to Troutdale without having to go on the shoulder Interstate 84.

4. Completion of the Historic Columbia River Highway State Trail is a priority for the Oregon Department of Transportation, Oregon Parks and Recreation Department and Travel Oregon.

5. The Oregon Transportation Commission strongly supports federal funding to complete the project and will communicate this in writing to the Oregon Congressional Delegation and U.S. Department of Transportation.

6. The Oregon Transportation Commission directs the Oregon Department of Transportation to develop federal funding requests and identify any required matching funds to take advantage of any grant opportunities.

Stallman credits this momentous announcement to the huge upswell of support from local communities in the Gorge who see the economic benefits the completed trail will bring to their cities. “I think they are seeing the value of cycling in the Gorge,” she says. Another major factor, according to Stallman, is the leadership of outgoing OTC Chair Pat Egan. Egan was one of many leaders who attended the “Policymakers Ride” on the State Trail back in August.

Friday’s meeting was Egan’s last as OTC Chair, so this project is now an historic part of his legacy.

As for what work remains to complete the State Trail, Stallman says they’re focused on a 10-mile stretch between Wyeth (Exit 51 on I-84) and Hood River. With funding already in place for the permits, environmental work, and engineering of all 10 miles and two projects that will bite off five of those miles, ODOT is getting very close to the end. A one-mile extension of the trail between Viento State Park and Starvation Creek will be constructed in spring 2015. Then in spring of 2016 another project (not funded yet, but in line for a state grant) would build a segment of the trail from Wyeth west east to Lindsey Creek. That segment, Stallman points out, would allow people to avoid the dreaded shoulder of I-84 around Shellrock Mountain.

This is great news for what will someday soon be one of the premiere bicycle routes in America. Stay tuned!

– Read more about the Historic Columbia River Highway project in our archives and on ODOT’s website.

Very exciting! I would love to see the same commitment towards building some 10 mile bike paths in Portland!

This is great news! The shoulder of 84 is no bueno.

Did the recent landslide have any effect on existing Gorge routes?

No news is probably good news, but a little confirmation never hurt.

That section (near Mitchell Point, just before Hood River’s first eastbound exit) drops every few years or so. It’s this ridgeline, coming down from Mt. Defiance, that I see as one of the biggest challenges to making any off-highway access to Hood River contiguous. Incidentally, where Country Club Road used to exit near the highway interchange has been moved further south (to comply with new federal safety guidelines) and renamed Wine Country Road. Access there by bicycle has been preserved, though, and new bike lanes completed.

Great to see this endorsement! Congratulations on your hard work continuing to pay off, Kristen Stallman!

Completion of the segment in the gorge will allow biking all the way from Portland to Rufus without feeway biking. All of the route will be paved except for the segment that follows Moody Road behind Celilo that runs between 15 Mile Road east of The Dalles and the Mouth of the Deschutes River. Moody road is a pleasant ride with beautiful vistas and pleasant interactions with grazing cattle.

This will be so awesome when it is done. I saw an estimate a couple years ago that put the total project price well above $50M, but it will be worth it. This truly will be of national significance.

I rode the existing trail this past Sunday (Feb 23rd) and agree it makes the ride to Cascade Locks much pleasanter! It’s nice at this time of year because the deciduous trees haven’t yet leafed out and you get a lot of river views that will probably be blocked in summertime. I’d caution that a significant portion of the trail is, as of the other day, seriously carpeted with red cinder gravel that must have flown off the highway after the snow storm. Not sure if clearing it is an ODOT responsibility, but a lot of sections are pretty bad. The gravel notwithstanding, it’s a great trail and expanding it is a fabulous plan.

Here is a link to an article in the Hood River News from January that has much more detailed information: http://www.hoodrivernews.com/news/2014/jan/22/odot-start-work-final-portions-historic-highway/. The 4 miles from Wyeth to Starvation Creek (the two phases Jonathan mentioned) will cost about $20M; the first portion is expected to open in 2016 with the final 3 mile section from Wyeth to Lindsey Creek opening in spring 2017. The last para of the article mentions that “the final stretch to Hood River will be more expensive and complicated to build, mainly due to the construction of a new tunnel through Mitchell Point…”

“That segment, Stallman points out, would allow people to avoid the dreaded shoulder of I-84 around Shellrock Mountain.”
Dreaded indeed. It’s so narrow you’ve pretty much got to ride the line for about a 1/4 mile past Shellrock. Almost bit it crossing rumble strips there (since removed by ODoT ) a few years back. Not a fond memory.

Oh, and this is fabulous. Thank you OTC.

Who says we want the gorge to be a “premiere bicycle route”?? 😉

BTW, even though the Mt. Hood Classic is no longer 🙁
the Tour de Hood ride will be held this year. 🙂
http://www.tourdehoodride.com

“BTW, even though the Mt. Hood Classic is no longer 🙁
the Tour de Hood ride will be held this year. 🙂
http://www.tourdehoodride.com”

Also, EVERY year for the past 13 yrs.: Columbia Gorge Explorer, a 4-day bicycle camping adventure that does the whole Scenic Area from both sides of the river. This year’s tour, CGE ’14 starts FRIDAY, May 23, 2014 from Vancouver, WA. Many riders don’t even start their cars – they ride directly from home. This is NOT a fund-raiser or for-profit ride so is inexpensive. Hosted by Vancouver Bicycle Club. More at http://www.VBCTouring.com.

Jonathan, it’s late in the thread but: near the end it should read “build a segment of the trail from Wyeth EAST to Lindsey Creek”.

“Historic Columbia River Highway State Trail”
I wouldn’t apply the term “trail” to the entire stretch from Troutdale to Hood River since the majority of those miles are on The Historic Columbia River “Highway”. Other than the two sections between Warrendale and Cascade Locks, and the Mark Hatfield Memorial Trail between Hood River and Mosier, the route is on a very narrow highway with no shoulder whatsoever. I regularly ride those two sections, but stay away from the rest which must be shared with motor vehicles. Although not as scenic, I’d say it’s probably safer to ride the shoulder of I-84 between Troutdale and Multnomah Falls.
I don’t know what plans are being formulated for the 100th anniversary of the opening of The Historic Columbia River Highway, but I think it would be fantastic if it were closed for one day, open only to bicycles, and perhaps antique autos.