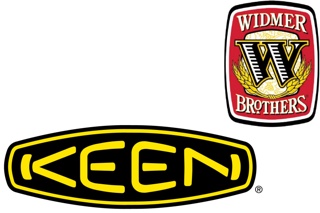 It has finally happened. For years now we’ve wondered why the largest beer maker in Portland — Widmer Brothers Brewing — didn’t have a bike-themed beer. After all, not only are we the best biking town in America, but Widmer is a very bike-friendly company. Co-founder Rob Widmer even rode his bike in a commute challenge during National Bike Month in 2008.

Now comes word that Widmer has collaborated with another Portland-based company, Keen Footwear, to make a new beer that will be called Full Fender Brown Ale.

We don’t know all the details yet, but the official announcement and label art are expected to be unveiled next week.

While we’ve sworn secrecy until then, we were able to chat with a source at Widmer who confirmed the new brew and the collaboration with Keen. Turns out leaders of both companies are fans of each other (Widmer beer makers wear Keen’s industrial, steel-toed boots in the brewery) and they’ve been wanting to partner up on a project like this for years.

For Keen’s part, we already know bicycling is a big part of their company culture. They have bike-specific shoes and many of their employees are daily riders. And it’s worth noting that both companies have on-street bike parking corrals directly in front of their Portland retail locations.

2014 has been a good year for bike beers in Portland. This news from Widmer comes just a few weeks after Captured by Porches unveiled their Mini-Bike Porter at a benefit party for the Sprockettes.

Our source says Full Fender Brown Ale is a very small batch and that it will only be available on draught.

Stay tuned next for more details and a look at the label graphics, which were designed by Keen.