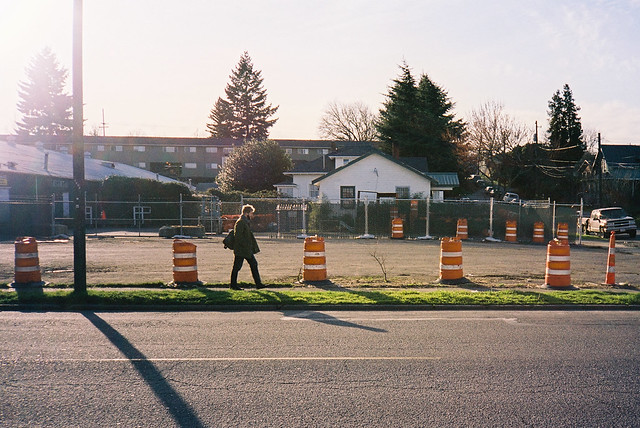 A Portland construction site in April 2013.
(Photo by sciencesque.)

But that’ll keep rents from rising quite as fast as they have been, he predicted.

“It looks like 2014 will again be all apartments, all the time,” Greg Frick of HFO Investment Real Estate said in a talk at the Multnomah Athletic Club, echoing his firm’s motto.

The surge of new units entering the market, he added, will probably drive up vacancy rates slightly and slow the rise of rents. Market-rate rents will probably grow a bit more slowly than the 6.6 percent hike the area saw in 2013, which was the third-highest rent increase in the country.

“The 2013 total of over 6,000 multifamily permits will be the highest number we’ve seen since the late 1990s,” Frick said. “Close-in areas have the largest amount of new projects.”

HFO has mapped the locations of 15,000 units currently being planned in the Portland area. The inner east and west sides now account for almost half the region’s total apartment growth: 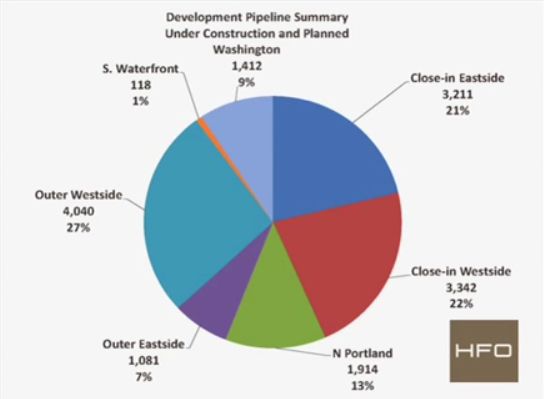 In part, Frick said, that’s because banks and other investors are convinced that central Portland will remain desirable for decades to come: institutional investors building big apartment projects in the central city are knocking 0.5 percent to 1 percent off of their interest rates for developers that are able to increase the number of units in the city’s precious core.

As we wrote in the first post of the Real Estate Beat, there are two ways to for a city to increase access to good bikeways: to expand its bike infrastructure to new areas, or to make it possible for more people to live in areas that already have it. For the moment, Portland is doing both — at least for those who can afford today’s rents.

You can watch Frick’s full report below.

Its great to see vacant lots and parking lots converted to housing, a trend that continues to reverse the decades of dis-investment that threatened the city in the years after WWII. Now if we can remove some freeways and use that land for commerce, housing, and sustainable transportation.

are you advocating removing I-5?
lets say that was done…
now, how much will a close in apt cost?

Do all these new apartment buildings require car parking though?

There are quite a few of these apartment building projects that won’t have parking. Good coverage in the DJC, Oregonlive, and Tribune sites on these. There is a large one in Sellwood off 17th & Tacoma that will have 46 units, with absolutely no parking (not even a parking space at the frontage).

“It looks like 2014 will again be all apartments, all the time,”

What does this mean? Is he implying that single family homes aren’t being built? That is most definitely not true.

Well, the city of Portland doesn’t really have room to build single family homes on any grand scale. And where there is vacant land, it seems developers are more interested in building multi-family housing, thanks in part to favorable interest rates.

I read “all apartments, all the time” as just a catchy phrase, not to be taken literally.

I’d like to see some numbers on the rate of ADU construction. This type of small scale, more-affordable and generally more desirable form infill get’s over looked because it is not something large developers can profit from.

You read my mind, or vice versa! On this way late this week or early next.

Given the shortage of rental units and rising rents since the housing bubble burst, it will be great if this proves true. I’m sure most of the new units being built will be well above the median rent (and thus may not actually lower the median rent), BUT the increase in supply may still help reduce the competition at the lower to middle range of the market.

no, but it will reduce competition in the high end market. they dont make cheap rentals anymore – no profit in that..

My main reservation about the apartment buildings going up on the east side is that most are architecturally dull, some look rather cheap, and all cram as much building as close to the lot edges as they can get away with. The Lloyd (Hassalo/8th) development is supposed to be LEED certified and incorporate public space; it is the rare exception. I think the city should review its code as to street setback and energy efficiency.

Some points about buildings built to the “lot edges”. In the assumption you are talking about the front and side lot lines, here’s some discussion. Rear lot lines are a different issue.

In fact, on Division Street, the “m” overlay, intended to increase the pedestrian-friendliness of the street, requires that buildings be built up to the street lot-line, moreso than the code would otherwise require. This is established urban planning: To create a pedestrian-friendly street, it is helpful to have a continuous row of building facades (a “street wall”) that establishes the street (the entire ROW) as a “place”, rather than a path that cuts through open space with buildings scattered here and there.

Now, if the sidewalk is insufficient in width (like 9′ instead of 12′), the city requires the property owner to “dedicate” (give) the land to enable widening of the sidewalk. But the building can then be built up to the new line. (This does result in sometimes a 2′ or 3′ jog in the building faces, but it’s the easiest way to get enough pedestrian space when it’s more difficult to narrow the roadway)

To this end, there are also not setback requirements between the sides of adjacent buildings fronting the commercial street. This is how “Main Street” development has worked for at least 100 years, and how cities have worked for millenia.

The worst offender to this environment are parking lots that abut the street. Such gaps in the “street wall” are restricted on most Transit Streets in Portland. They are not allowed between the building and the street. Yes, they are allowed at the side of the building, which is still problematic for the feeling of the street.

Public plazas are a different issue. In traditional towns, the plaza is an organic widening of the “street” (that is, the sidewalks and roadway. Usually the widened part is these days pedestrian-only realm). In the sort of grid pattern we have in Portland, it’s hard to add this element. Do notches into a building front provide this? They often feel like a private, commercial element, rather than public space. Indeed, they’re often reserved for cafe tables.

I think that one opportunity, that will probably be squandered, it to build a circular plaza, taking up the corners of 5 blocks, at the corner of Division and 21st/Ladd. A circular lot line could be established, and all new developed to that line, multistory, to create the kind of “circus” you see in London. Wider sidewalks around the edge and public space in the middle could be built, and the interruption in the grid would make a unique urban “place”.

The Lloyd district project seems to mostly be creating internal “streets”, as public spaces. They may be a nicer environment than the surrounding heavily trafficked streets.

More inner city housing can only be better for everyone. The alternative is more suburban housing, and more roads to support that.

What I’ve always said is: if you’re concerned about the environment, live in a city. It’s the least harm you can do to this world. City living is more efficient, preserves farmland (and minimizes farm-market distances), reduces car-dependence, increases social connections, makes for better informed and more engaged citizens.

portland is always matches what san fran is doing rentwise – just a few years behind..

so 3k apt rents are right around the corner —- and yes, there are enough independently wealthy people across the globe to pay it