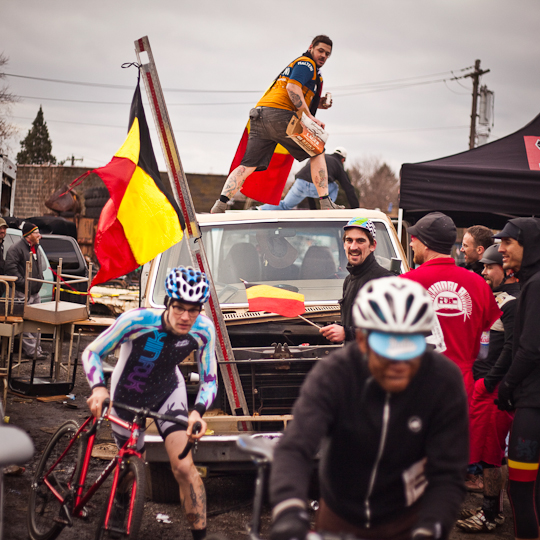 Portland photographer Dylan VanWeelden traveled to Philadelphia for the Singlespeed Cyclocross World Championships and brought back some great images.
(All photos by Dylan VanWeelden)

The (unofficial) seventh annual Single Speed Cyclocross World Championships (SSCXWC) took place in Philadelphia last weekend and Portland resident Dylan VanWeelden was there with his camera to document it.

The SSCXWC got its start in Portland in 2007. It was held here for its first three years before moving to other cities. The event is is known as “world championships” but it’s completely unsanctioned and not recognized by any official racing organization (hence the nearly exclusive use of the acronym SSCXWC instead of “world championships” so as not to get in hot water with the UCI).

The 2013 edition of the race looked to be as crazy and raucous as I remembered it back in 2009 when participants pedaled through a Mad Max-themed ‘Thunderdome’ and a huge pile of bubbles. This year’s event took place at several venues, including the infamous Bilenky Junkyard (named after legendary bicycle builder Stephen Bilenky).

VanWeelden attended the event to shoot photographs for Chris King Precision Components where he works in the marketing department. He agreed to share some of his images with us. Check them out below to get a sense of the fun that was had… 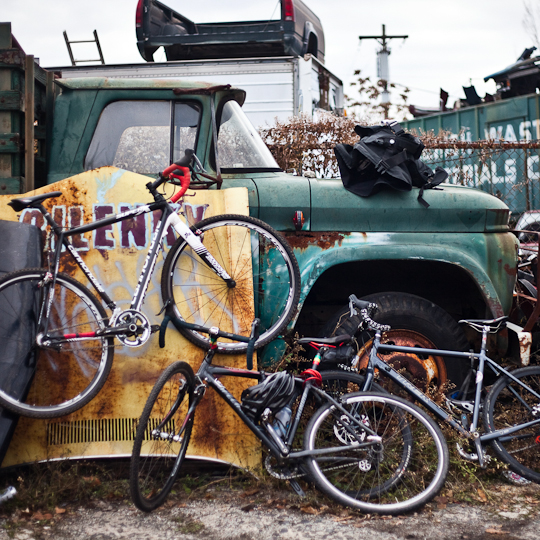 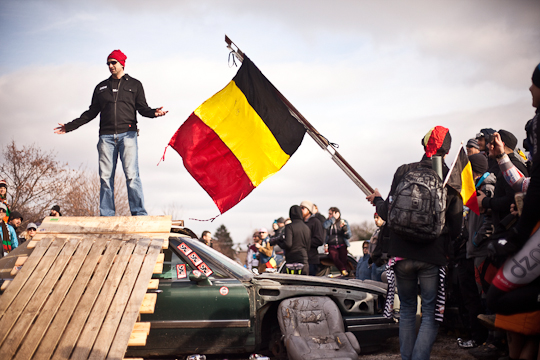 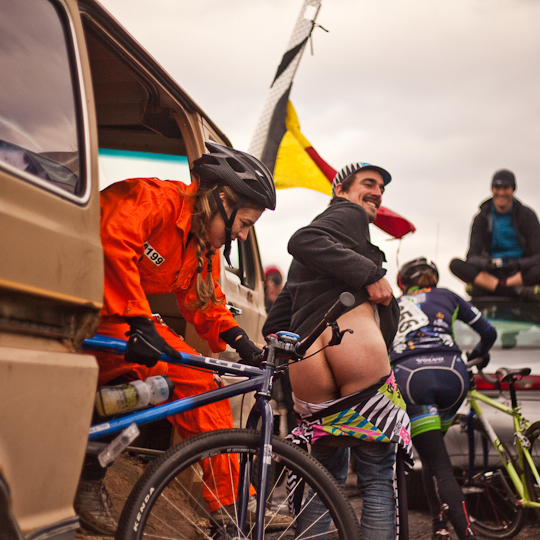 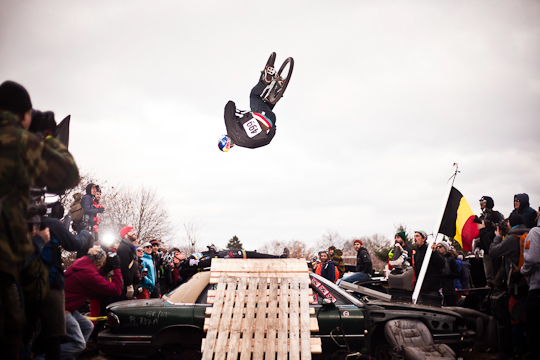 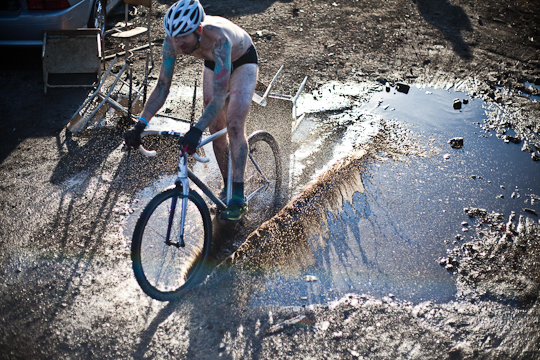 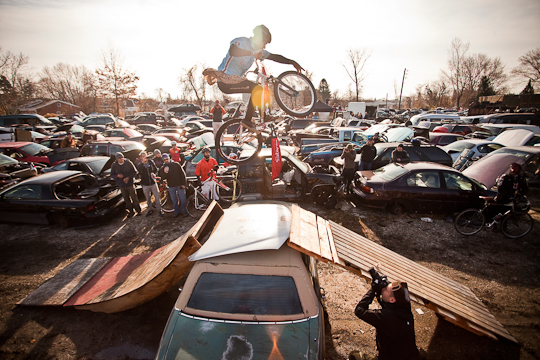 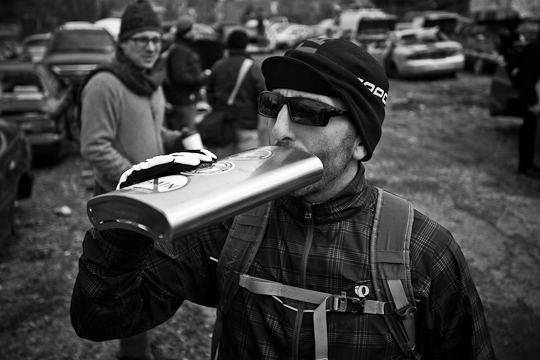 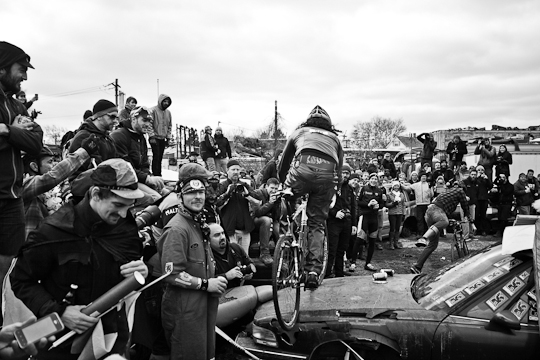 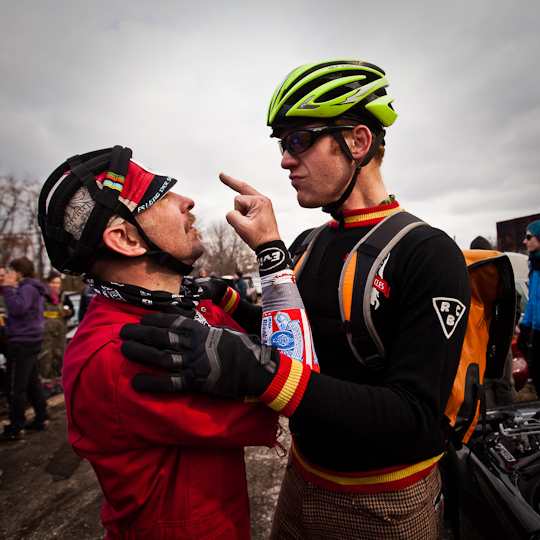 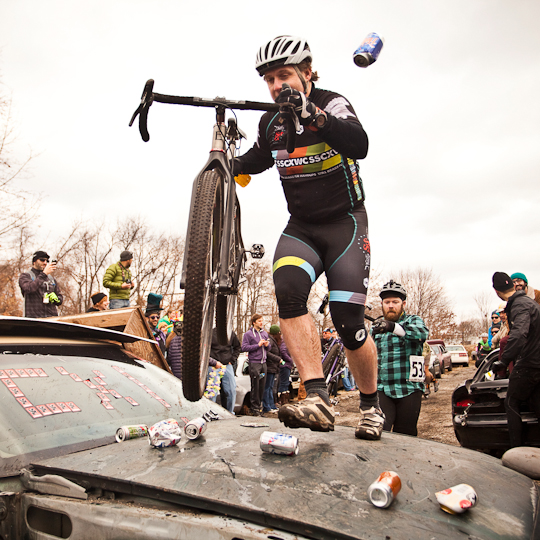 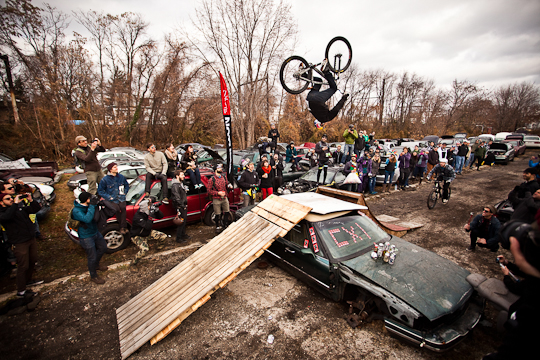 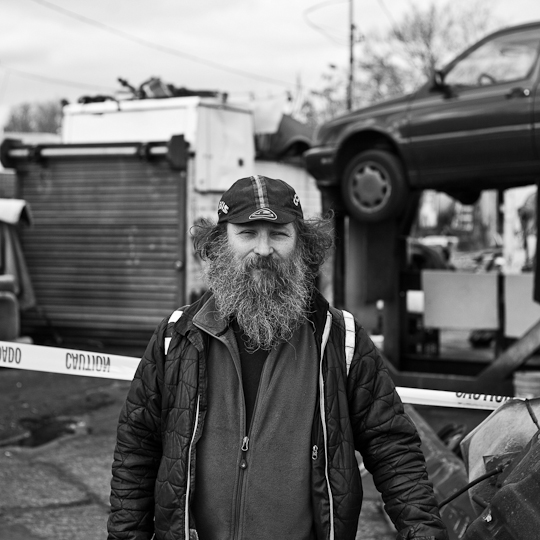 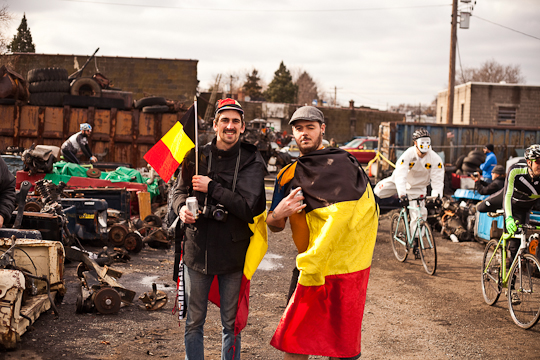 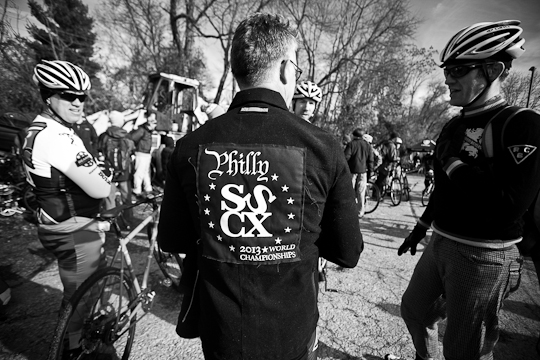 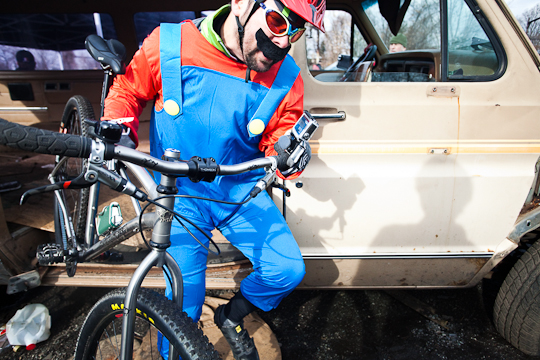 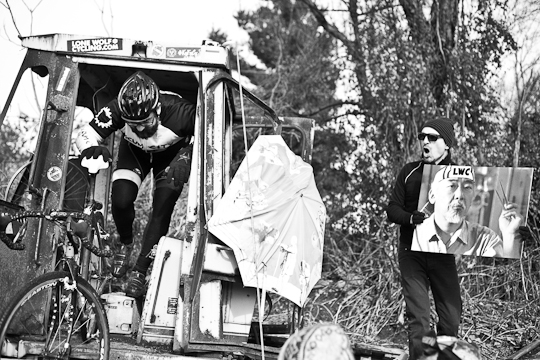 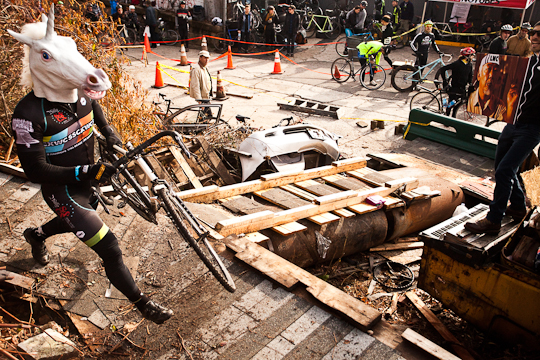 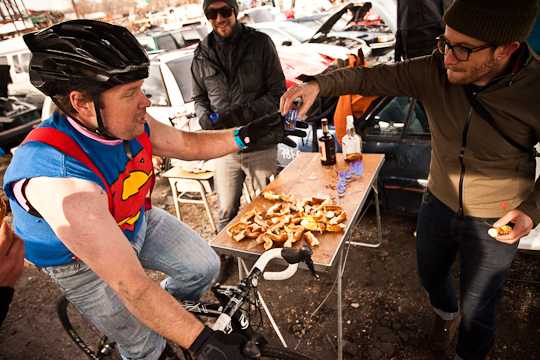 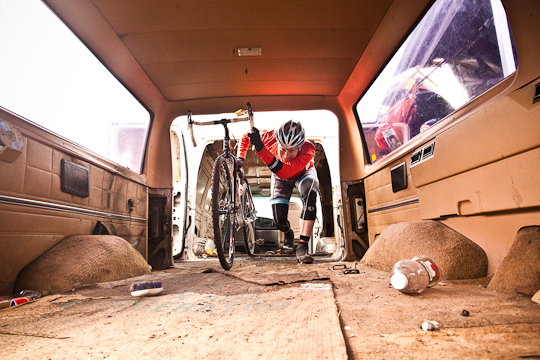 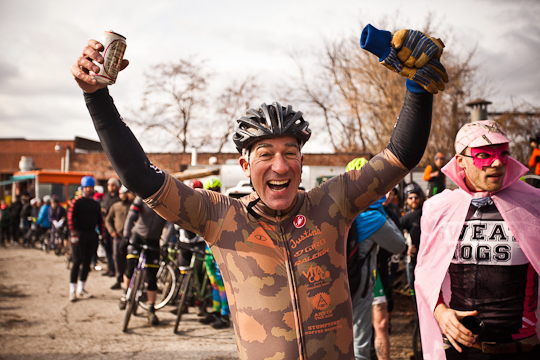 Hey! That’s none other than Portland architect and Cross Crusade founder Rick Potestio! 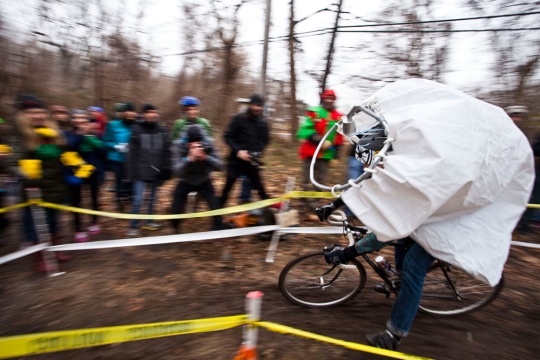 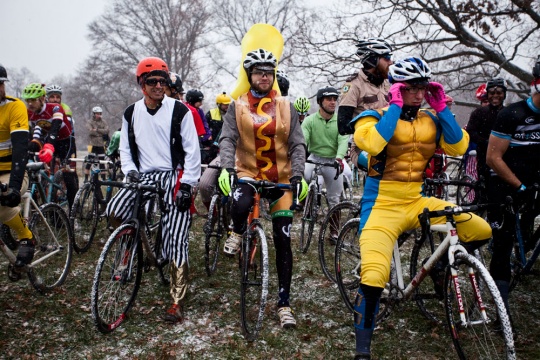 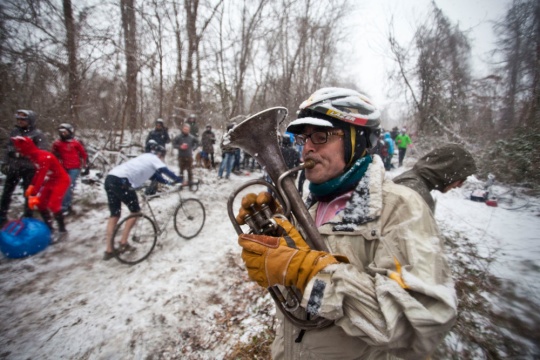 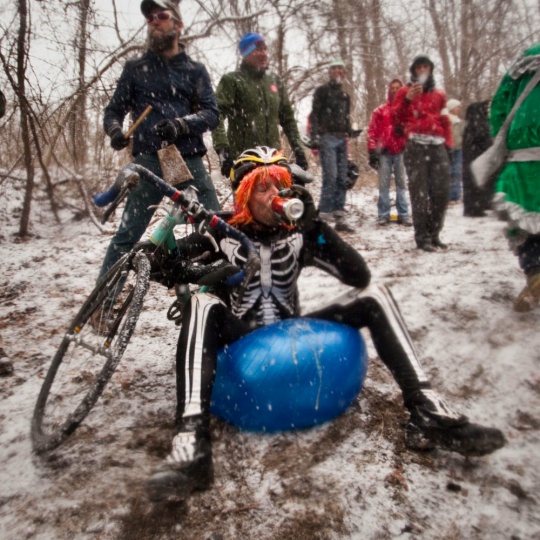 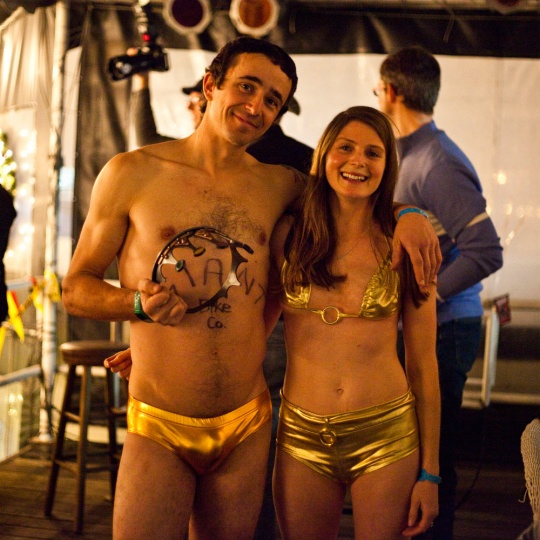 Thanks again to Dylan for bringing home such great images. Watch the Chris King blog for more of his images and thoughts on the event and browse more of his work via Flickr.

Sniffle…the photos makes me fondly remember the “old” days of cyclocross and other bike events in Portland before “platinum fever” took hold of us.

After looking at the photos…I hope the Portland participants had the usual shots for international travel…tetanus, rabies, gamma globulin, etc.

Take a look at the pictures from the next day at the actual event, you’ll be saddened.
I think they should have had the actual race at the junkyard. The Sunday “Championship” course looked too tame (except for the weather).

Well, except for parachute hill that less than a third of the riders could actually ride. Or the singletrack that got increasingly slicker (side note: there was originally more singletrack planned, but the trails were too wet to ride without getting completely destroyed). Also, riding up the hill on the plateau isn’t always easy, it’s steeper than it looks.

Thanks for the reply (as I clearly wasn’t there). Do you know if they had any obstacles that were canceled because of the weather?

I think Portland’s grass-roots, alternative bike scene is best described by Yogi Berra, “Nobody goes there anymore. It’s too crowded.”

My ass on the Bike Portland website … that was an amazing trip from Belgium! See you soon guys,

Did Muscles get the tattoo?

Nice write- up, and photos!!

HUndreds of pics my son and I took can be seen here: http://www.PJFreemanPhotography.com
(as they came out of the camera, not photoshopped)
We can edit any pic if desired.. a few examples are in the FB gallery..

All photo sales goes to his college fund… thanks for looking!
Hope to see you at SSCXWC 2014…
Best regards,
Paul & Erik Freeman

Good times, great pics, thanks for reporting this.

Seems like I used to see more of this stuff in Portland, but these pics are waaaay out there. Bike races through junkyards, doing flips on a ramp over a dead car, a couple hundred people having an absolute blast. Am I just not going to the events, or has Portland bike fun gone zany-lite?

Question for ya’all — I’m looking for some motivation to get out of my basement wonknest and spend more time in the real bike world — What are the local events that are comparable to this in level of intensity, participation, and zaniness? If I want to go out and spectate, where do I go there days? Minibike winter? Zoobomb? Cyclocross races at Alpenrose? PIR races? Midnight Mystery Ride? Loud n lit rides?

Thanks in advance, Ted Buehler

Portland certainly has a lot of fabulous bike events. Great for getting people on bikes, making people enjoy being on bikes. Wildly successful. But the “I’m having a blast!” factor in these Philly shots is off the charts of most Portland events.

FWIW, the annual events that I’m a huge fan of, and thoroughly enjoy, are
– World Naked Bike Ride
– Pedalpalooza Kickoff Parade
– all 5 Sunday Parkways
– Bridge Pedal
– Bunny on a Bike
– Alice Awards (though I’ve only been twice)

& I miss the Mississippi Cirque de Cycling or whatever it was called, and the Tour de Fat, and I’ll miss Bunny on a Bike if indeed it isn’t renewed.

Went to Philly last week… missed this event but was blown away by the awesome bike culture. Philly rocks!

^^Philly^^ @nikorasu:YES! Philly does rock. @davemess: there were some obstacles including a cutout of Washington crossing the Delaware, humans crouching across the course and yoga balls. More words and pics on SSCXWC13philly here: