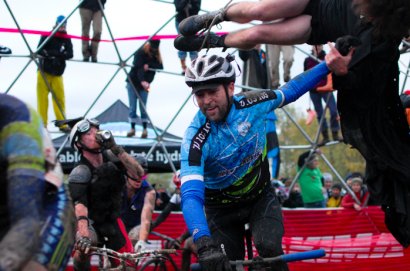 There was a full menu of Portland-style cyclocross celebration out at Portland International Raceway (PIR) yesterday. In typical Cross Crusade fashion bustling expo area and team village, thick mud, an exciting race course (for both spectators and athletes), and plenty of beer all provided ample diversion from the cold and wet weather. 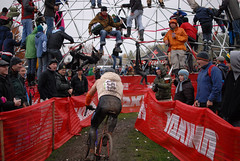 Enter if you dare.

On their own, Crusade events aren’t your average bike races, but add in the pseudo-official Singlespeed Cyclocross “World Championships” (SSCXWC, put in quotes as to not attract UCI lawyers) and you’ve got something that resembles more of an outdoor Cirque du Soleil complete with costumes, exotic dancers, live music and death defying (and beer-fueled) acrobatics.

But before we get to all that, let’s pay our respects to another spectacular Crusade course. It was long long and challenging, full of deep puddles and “peanut-buttery mud” (which is how one racer described it). 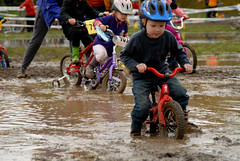 In true Crusade spirit, even the tiny kids embraced the mess. The Kiddie Crossers rode through the soupiest, squishiest mud with a range of reactions. I saw one kid start crying after he lost a boot somewhere in the shin-deep muck; a few young girls yelled, “eewww, this is disgusting!” while they traipsed on through. But most of the kids — some of them 3 or 4 years old and with training wheels! — charged on through. The future of Portland cyclocross looks very bright.

While the Cross Crusade is a big deal (it’s the largest ‘cross race series in terms of participation in the world), yesterday it served as merely an appetizer for the SSCXWC. All day rumors swirled as organizers prepped the venue with strange (for a bike race) props and structures. 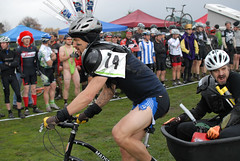 A bagpipe player stood solo in the middle of a field that would later be the site of battle. On the backside of the course, a bus full of strippers tried to lure racers to stop. A stage was set up for a rocking performance by a Black Sabbath cover band that featured River City Bicycles co-owner David Guettler on guitar bass.

The folks from Yakima had constructed a geodesic dome to act the “Thunderdome” to go with the event’s Mad Max theme. Human body parts and entire humans hung from the pipes, awaiting racers with bags of marshmallows and other heckling implements.

A few faces from the crowd:

The race began Le Mans-style, with 250 racers assembled in a massive circle as a pair of gladiators in a cargo bike riled up the crowd. With a cry of “FREEDOM!” they ran toward their steeds hoping to be first up the largest hill on the course in order to win a Raleigh frameset.

A mass of spectators assembled around the Thunderdome, many of them dangling from the pipes. Check the short video below (taken with an iPhone) to get a feeling of what it was like inside:

Away from the main action, a large school bus had been parked on the course. It was deemed the “Stripper Shortcut”. Racers — who had all been forewarned to carry small bills during the race — were lured from the course to a shortcut that routed them through the bus while dancers enticed them in exchange for muddy money. (Henry Abel of Bend’s WebCyclery.com provided the bus. Read his report on the action here.) 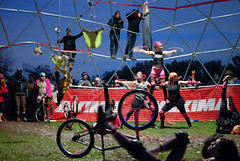 After the race, the Sprockettes — who are no strangers to insane bike events, but even one of them said to me, “Dang, these cyclocross people party hard!” — performed inside the Thunderdome. It was their muddiest performance yet.

The Thunderdome action continued into the night with a major score yet to settle: Who would host the SSCXWC next year? Reps from San Francisco and Seattle, who had debated the issue at an event the night before, mud wrestled. Seeking refuge for my young children, I didn’t stick around to see what happened, but at least one report says Seattle was victorious and will host the event next year.

If you still haven’t experienced Portland’s brand of ‘cross racing, the season is far from over. Next week the Crusade heads to Barton Park for its final stop. Then in December, PIR will once again host the action as the US Gran Prix of Cyclocross returns to Portland.

For more shots of all the action, watch the slideshow below:

Great reports and pics. Love that the kiddies got in on the action.

I’ve always wondered who was more nutz, the ss MTB crew or the SS X folk and the debate still needs to be settled, but I’m leaning the SS X crowd!

The Rain got in the way of me shooting more video, but for whatever its worth here is some of the Womens race:
http://www.youtube.com/watch?v=LW8MXZNVdy8
or
http://www.vimeo.com/7510617

Jonathan… I have a helmet cam video with you almost being run down by the SSCXWC09 field at the s-curves!

Glad people enjoyed it, although the scene has reached the point of trying way too hard. Anyone who races bikes and has been around for a while can see that.

That’s me on bass, not guitar.

That’s not trying too hard, that’s showing the world that Portland, Oregon brings it bigger and better than anywhere else.

Dani and her crew killed it this year.

Some more photos and a video of the start.

Get up to speed on some of the events at Astoria the previous week. There are those who seem to be trying hard to make the ‘cross scene about something other than bike racing. Dani D did a great job and isn’t part of the problem. Have fun out there, people, but please respect the athletes and don’t make it less fun for those who are actually there to race their bikes. Everyone should be accepted so long as they’re not hurting someone else’s experience, but that line’s been crossed a few times lately. This is getting too long. I’ll stop.

There is never such a thing as trying too hard. There is only trying “pretty hard.”

My friend John posted a fun little video of the Thunderdome shenanigans.

Rad coverage/footage. Does anyone have photos of the womens race? Please? What’s with the shortage there…