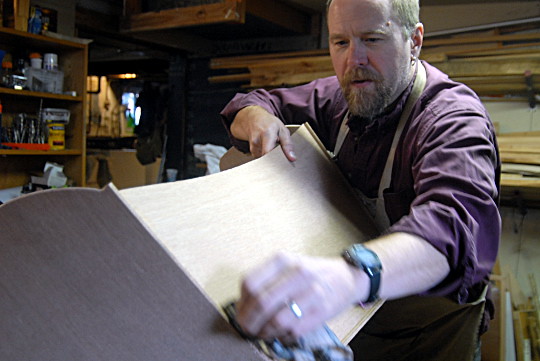 Working from his basement for a few hours each week, full-time-dad Jeff Lauten will soon finish on his 34th “semi-custom” wood box for a Bullitt cargo bike.
(Photos by M.Andersen/BikePortland unless noted)

Jeff Lauten became a carpenter midlife, he says, because he had no choice.

“The house is 100 years old,” the 48-year-old explained Thursday morning, standing in a North Portland basement that seemed suspiciously crowded for that of someone drawn to physical craftsmanship against his will.

Still, the truth was that Lauten didn’t much enjoy plumbing and shelving and, as he puts it, “all the things that people want.” He liked “little projects.” So when his wife, a hospital social worker, wanted to have their second child, Lauten upped the ante: he said he’d help her out only on the condition that he got to take a framebuilding course at United Bicycle Institute so he could learn to make unicycles.

What had been a hobby for years — Lauten is an active member of the Unicycle Bastards, the city’s most unexpectedly mature unicycle riding club — suddenly became a craft. Unicycles, he notes, require less equipment than entire bikes anyway.

Badger Bikes, named after his second daughter’s personality, was born. 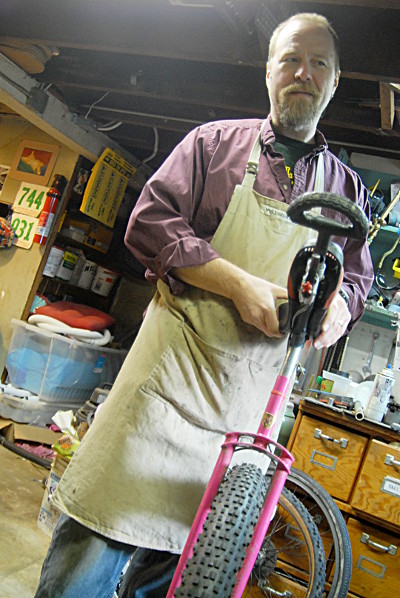 So far, he’s made four, two of them for a pair of friends who were getting married. They all come with hand-built dropouts and a “twin-plate” design that he says he does because it’s almost the most ridiculous framebuilding task imaginable.

Then Lauten’s brother-in-law introduced him to Joel Grover of Splendid Cycles, the local cargo bike shop that has quietly become the West Coast’s largest importer of Danish Bullitt flatbed bikes. Grover was looking for someone who could build sturdy, attractive wooden boxes to fit the frames.

Lauten tried his hand at one. It sold, so a few months later, he made another. A year after that, he’s working on boxes 29 through 34. 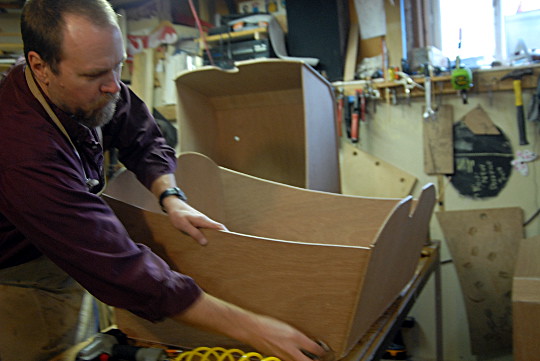 “You wouldn’t think anybody would spend $750 on a hand-built box,” he said. “But people like what they like.”

Lauten uses jig templates for most of the components of his boxes, then scrounges bits of interesting wood to add 3-D decals to the sides. Sometimes, when he’s stuck for a design, he’ll ask his 8-year-old daughter for advice. 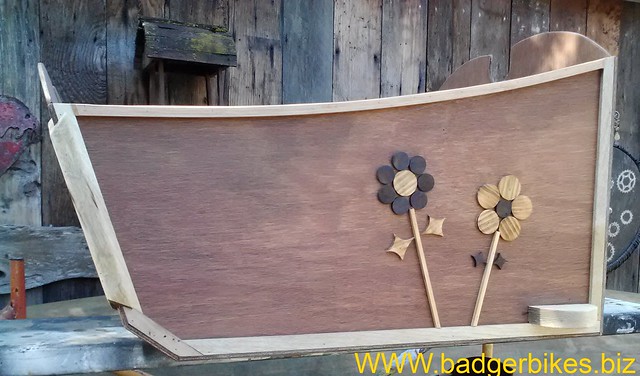 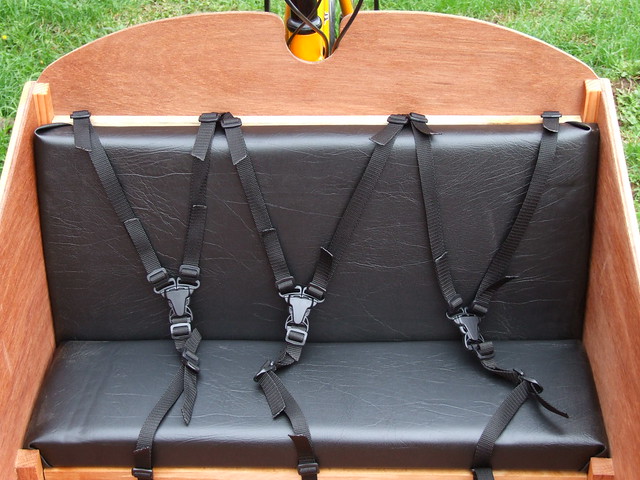 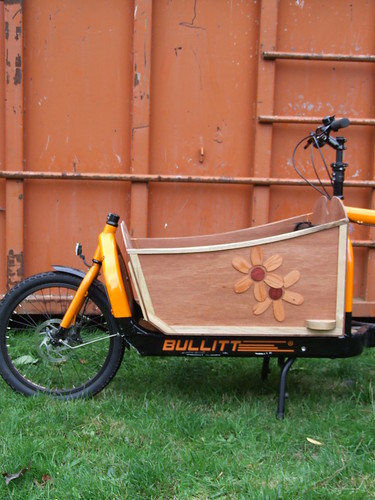 Now that his younger daughter is in school, Lauten said he’s looking to scale up slightly and sell one or two a month directly from his own site in addition to his deal with Splendid Cycles.

“The box-bike scene hit Portland about four, five years ago,” he said. “I figure there are some boxes around town that are starting to get pretty battered, and could use some sprucing up.”

Lauten said he’s got no interest in scaling the business bigger than his basement or himself; doing the taxes for his sole proprietorship seem complicated enough already. On the other hand, he said, he does get satisfaction from, after years as a full-time dad, being able to pay the family’s property taxes on his labor. 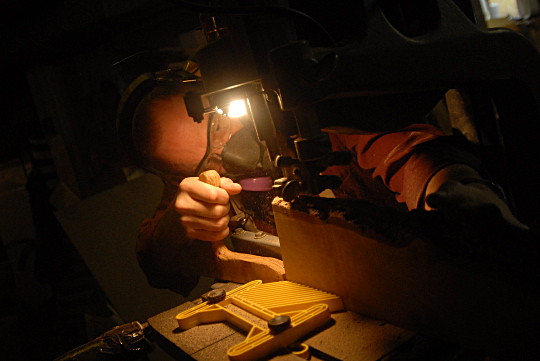 “You smell that?” Lauten asked Thursday morning, as he pulled the mask from his mouth after using a borrowed band saw to split a scrap of decorative wood. “It’s oily, eucalyptusy. I love that.”

He doesn’t love it so much that he’s eager to build bike boxes forever, though. Lauten glanced at the pile of half-finished boxes on his work table and said he was starting to get a little bit bored of them.

“Yeah,” he said with a guilty smile. “That’s a problem too.” 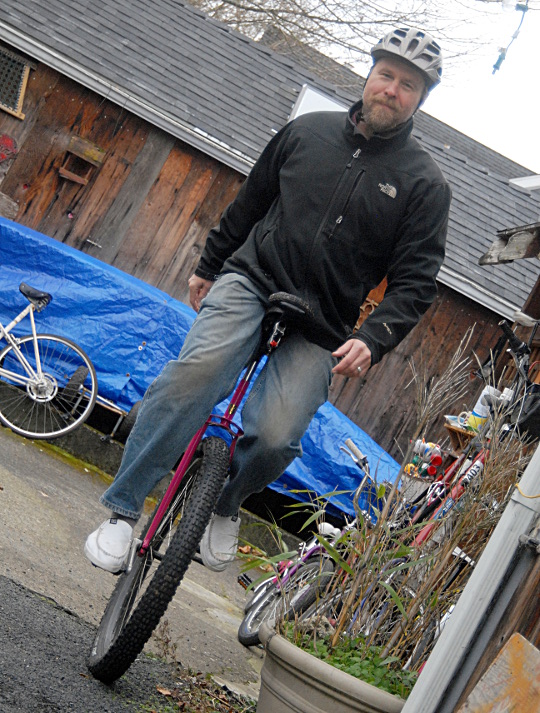 Wonderful story. Thanks for these profiles. I look forward to more!

Now THIS is a “lifestyle” article

Ha! I’m waiting for the T-shirts to appear…

Great story. Thanks. Congrats to Jeff Lauten for finding a way to make it work and be a great dad tool!

Those are some sweet boxes. I like this column.

Let me add to this to the list of accolades for Jeff: excellent neighbor and teacher. And I really want one of his beautiful boxes to replace the one on my well-loved Metrofiets. In real life they’re even better looking than the pictures.

Does he make any with a zombie theme?

Opus the Poet
Reply to  Burk

You should ask the man himself. 😉 I’m sure that for enough €ncouragement ($$) he could work with just about any kind of theme.

I would be afraid I’d crash it Zoo Bombing. 😉