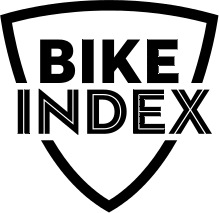 After raising over $50,000 in a successful Kickstarter campaign last month, the folks behind the Bike Index are wrapping up a five-city West Coast tour tonight in Portland. To celebrate the launch of their new national bike registry, they’re hosting a party tonight at The Lumberyard Indoor Bike Park (2700 NE 82nd Ave).

If you haven’t heard about the Bike Index, it’s humbly described as “an open source bike registry to fight bike theft and save the world.” The site is based in Chicago and its goal is to get more people to register their bikes before they’re stolen. Since the existing National Bike Registry charges a fee and uses outdated technology, few people actually use it. To encourage more widespread registration, the Bike Index crew has made their tool open-source, free to use and mobile-friendly. They also partner up with bike shops and other bike organizations to get bikes registered at the point of sale.

As urban cycling booms in cities across America, bike theft is becoming a more prominent issue and entrepreneurs, software developers, and high-tech engineers see a golden opportunity. It seems like every week there’s another new device on Kickstarter that promises to end bike theft as we know it.

While the Bike Index gets off the ground, another similar effort is being hatched by a Portland-based company called Project 529. Backed by industry juggernaut and component maker SRAM, Project 529 has been relatively mysterious until now. The two founders of the company have backgrounds at Microsoft and XBox and now they’ve devoted their resources to a bike registry system. This new registry is yet to be named and it won’t launch for a few more months, but from what we’ve learned it looks to be very similar to Bike Index.

If you want to learn more about the Bike Index and get your bike registered into the system, stop by The Lumberyard tonight starting at 6:00 pm. Just mention the Bike Index when you arrive and you’ll get a free drink ticket and discounted ($19.95) access to The Lumberyard if you’d like to do a bit of shredding.

Here’s the event flyer for good measure (and the Facebook event page if you’re so inclined): 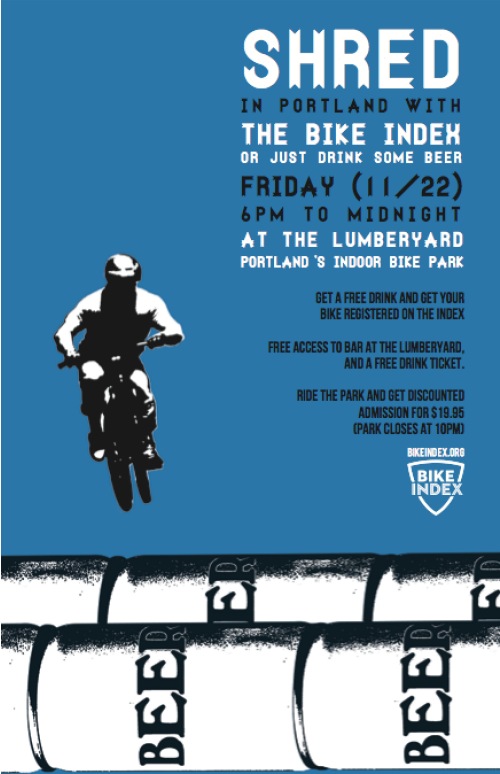 FWIW, stolenbicycleregistry.com is partnering with BikeIndex as well, for data sharing 🙂 Super excited to have some collaboration on this!

Thanks for mentioning that, I was wondering. Great collaboration!

Why start up 539? If BIke Index works (and Portland is already one of their declared served markets) we’re kind of already being served, yes?

Just seems like segmenting up the data across multiple sources makes it that much harder to check the data.

…because everyone thinks their concept is one step better than the competition. 😉

+1,000,000 for ONE registry index please. This is a big and very important project, and I wish SBR and BI well.

It’s basically impossible … the technology is such that anybody can bang one out now, but I think this is OK. Diversity promotes specialization, competition and feature advancement 🙂 For example I don’t have the knowledge or time to run a Spanish or German SBR, but I’d love to see one come along.

The ‘special sauce’ is going to be the various features, local tie-ins, promo, support, etc. and how well run/managed each one is. And the good news is that through the promotion and use of open API’s, services like the SBR and BikeIndex and whoever/whatever comes along next should be able to play well with each other — and cross search, cross list, cross-query and so on. So a bike listed as stolen in site A will still show up as stolen if you search it in site B, etc. — so fragmentation doesn’t hurt functionality.

I say the more people who want to help fight the problem, the merrier – as long as they all play well with each other and get more people registering and searching for stolen bikes.

Yep… ONE database with lots of feature-differentiating front ends to choose from = great!

529 needs to throw their resources in with BikeIndex. It sounds like egos at work here.

Great, now we just need to:

Considering at least 1/3 of the cyclist popultaion doesn’t even bother with numbers 1-3 (At least 1/2 the people I know that have had thier bike stolen eventually admit to it not being locked up when it stolen, and about the other 1/4 are locked so poorly that they might as well not be locked at all). And then #4 only really matters if points 5 and 6 happen. I bet more bikes have been stolen this summer than car tires (about 500 since May) have been slashed, but what’s PPS investigating?

There is little hope that bike thievery will ever go away.

And I doubt that the two companies will share information, untill there is a clear winner and loser.

as much as using the database, recording your ser#s and emailing them to yourself with an obvious subject line like BIKE SERIAL NUMBERS along with a picture of your bike(s) will go a long way to reporting & recovery.

Yup. I’ve got a picture of my receipt and my serial number in the same picture and I keep a copy of it on my phone at all times.

Why not just license bikes in Oregon? Other states could do the same.

mostly because it offers no benefit and costs a lot of money. you knew the answer before you asked the question, is my guess.

Actually what we’re doing at Project 529 is significantly different. Building a database of serial numbers and associating those with names is fine and we’ll work with all of those folks (including Bike Index and the rest) what we’re looking to accomplish is far more robust and proactive in terms of combatting bike theft.