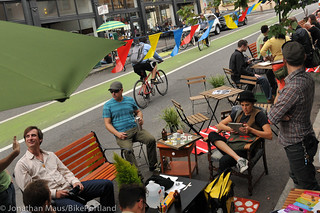 Downtown Portland needs more of this.
(Photos by J. Maus/BikePortland)

This is a guest article by Katrina Johnston-Zimmerman.

This year’s PARK(ing) Day has come and gone, but to those who had a hand in the event or just took advantage of the day-long parklet on SW Stark, it was a happy memory and an example of what a public space can truly be in Portland. It was a day filled with friendly conversations, strangers uniting over a game of ping-pong, and citizens enjoying a place to work or eat their lunch. For me, I consider it a great accomplishment, and passing the street today seems bleak by comparison.

But what made this day so unique? Portland has parks and plazas, public spaces that have seating options and other forms of programming. But our city doesn’t have small parks like those cropping up in cities everywhere. The location we chose is one of these places in the city that could use a chair-filled public space. The food carts are nearby, but no seating area exists aside from O’Bryant Park – a space with design issues and a lack of movable chairs.

Portland has a ‘street seats’ program, which can also be used for these types of parklets, much like the program in San Francisco that came about from the original PARK(ing) Day experiment. As of now, the program has only produced private seating areas for restaurants – an excellent solution to “sidewalk creep” to be sure, but not a public space. It’s also very unfortunate that the City caved to the Portland Business Alliance and decided to not allow any street seats in the main urban core. But that shouldn’t stop us from moving forward! 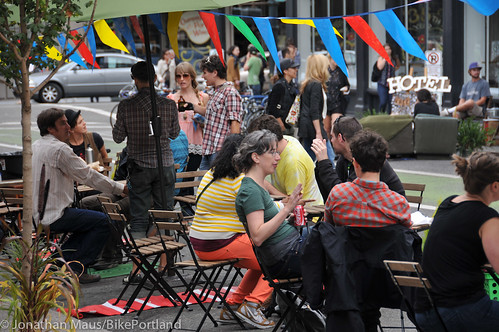 Streets are for people, not for cars.

Before plotting a course for future action, I wanted find out what Portlanders really think. First and foremost I’m a researcher – when not working on reports at a local research firm, I’m conducting mini ethnographic observations at public spaces and blogging about the results. I had done intercept surveys before, and I immediately recognized that this would be a great opportunity to gauge opinions of a public space like this based on not only a hypothetical drawing, but a real life example.

So what do Portlanders want? 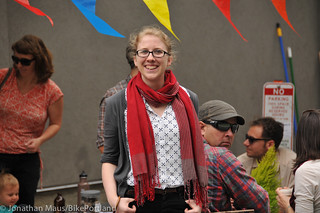 If the survey has anything to do with the answer, they want more public spaces! In all, we got an astounding 142 completed surveys (only two people turned me down – you know who you are!) providing a wealth of data and many insightful comments.

The vast majority of respondents had been to the neighborhood before and thought that it had improved with the PARK(ing) Day use of space. They loved the increase in people, street furniture, fewer cars and safer speeds, increased bike infrastructure, and general sense of community. They also wanted to see more of things like this and thought that the city should take more parking spaces downtown and turn them into public spaces rather than increase parking spaces downtown. Respondents from out of town were inspired, wished they had it where they lived, or even mentioned liking Portland more because of it. Read the entire report here (PDF).

Whether by looking at the survey or simply witnessing the event itself, what that day showed was that by a simple intervention of movable chairs, a bit of programming (ping pong), and community support, a lively place can be created. What’s more, these interventions, or even permanent places, can be created fairly inexpensively and are wanted in our city. These kinds of temporary interventions can provide a tangible example of what our cities can be like and also give real time feedback in an effort to make them permanent improvements to our city.

This project was downtown, but there are so many other places in the city that can use this kind of improvement, these projects have unlimited potential. In other places, organizations exist that do these sorts of projects. If you’re a transportation wonk, an enthusiastic urbanist, or just interested in this kind of thing and would like to talk about it more, you are invited to our informal happy hour to talk about future projects!

Nice work Katrina! Really glad to have some stats to back all anecdotal joy and smiling from that event.

Read the report, and my only thought would be to adjust the Q4 area. If you read just the bold question and the graph (which I did on my first quick pass), the actual result is flipped!

Thanks for the response! I enjoy mixed-methods to put the data behind the observations.

The results for Q4 are accurate, just not quoted in their entirety in the graph. The first statement was to “increase parking downtown” (with very little support) and the second statement was to “reduce parking and increase public spaces” which was supported by the vast majority of respondents. An obvious outcome, but intentionally leading so as to force a decision one way or the other.

Thanks, Adron! And thanks for joining us on Monday!

Will try to make this, sounds good – I wonder if this is a possibility for some residential blocks, too.