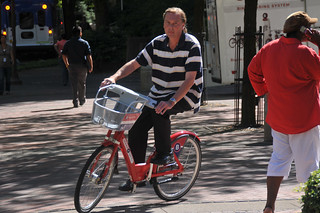 Not considered public transit by the IRS. Yet.
(Photo by J.Maus/BikePortland)

U.S. Rep. Earl Blumenauer is cosponsoring a bill to officially recognize bike sharing as the newest category of public transit, at least in the eyes of the IRS.

Unfortunately, the bill is limited by a persistent oversight in tax policy that restricts its benefits to those who both live and work in areas that have bikesharing stations.

It’s a new goal for the city transportation commissioner turned Congressman, who spent years pushing for the IRS’s first bike commuting benefit. The $20-a-month deduction finally passed as part of the 2008 bank bailout (despite Blumenauer’s “no” vote on that package).

Neither the existing bike commute deduction or Blumenauer’s proposal would affect personal income taxes. Instead, they let employers (including governments and nonprofits) reimburse workers for bike expenses or bike sharing passes like any other fringe benefit, and treat that cost as a business expense.

The effect would be to encourage U.S. companies to offer cheap or free bike share memberships as a benefit to their employees, just as many now do for transit passes or for auto parking. As we reported in the Monday Roundup last month, the IRS ruled this fall that bike sharing doesn’t count as “mass transit facilities,” and that Congressional action would therefore be required for it to become a recognized fringe benefit.

It’d be one more way companies can reduce their parking costs and encourage a more physically active workforce.

There’s a catch, though: as currently written, the deductibility only applies “if such bicycle is regularly used for travel between the employee’s residence and place of employment.” It also can’t be claimed for the same worker in combination with any other commute benefit.

This is the same restriction that applies to all commute trips — one that assumes that every commuter gets to work using exactly one mode, then turns around and goes home without making other trips.

That’s a notion that Rep. Blumenauer has rightly criticized. In the case of bike sharing, it disregards the main benefit of these systems: not as a commute mode itself, but as a way for people who commute by public transit or carpool to quickly run errands in the central city without having to bring a car or bike all the way from home. Bike sharing makes low-car commuting better without being a common commute mode itself.

In other words, even this pro-bike-sharing bill is trapped by the law’s old-fashioned, mono-modal thinking about transportation. The effect is to restrict its benefit only to those who both live and work in the central city.

Blumenauer spokeswoman Tyler Emilie Frisbee said in an interview Wednesday that their office had introduced legislation in the past to allow benefits for multimodal commuting, but that such ideas hadn’t landed the Republican support essential to passage by the GOP-controlled Congress.

“I think we actually have a chance with this,” she said. “And this is what we have been told by every bikesharing community would be incredibly beneficial to them.”

Portland’s bike sharing system was originally supposed to launch last spring, but has been delayed by a shortage of private sponsors. City Active Transportation Manager Dan Bower cited the spring target at an event just yesterday. Alta’s 2012 proposal anticipated that an annual bike sharing pass in Portland would cost $75 per year and that very few stations would be outside downtown and the Lloyd District. Pass holders could ride free from one station to another for up to 30 minutes, then pay a rising fee for longer trips.

Blumenauer’s bike sharing provision is part of the bipartisan Transit Parity Act, a bill that would also allow companies to continue deducting the cost of reimbursing their employees’ park-and-ride expenses, just as they are currently allowed to deduct the cost of on-site parking. This perennially endangered law is an important issue for transit riders in metro areas whose transit agencies, unlike TriMet, charge for park-and-ride access.

This is great, but I wish we could just eliminate the commuting subsidies altogether. The existing system mostly funds parking and transit passes, and essentially subsidizes long commutes. Why are we rewarding people for spending money on expensive parking, and long distance transit commutes? Living close to work, and cycling would make more financial sense if these subsidies were removed.

I don’t see why subsidized parking for private automobiles would count as “mass transit facilities” under IRS rules. Maybe I’m misreading that paragraph, but it sounds as though subsidized transit passes are being equated with car parking.

If parking for automobiles can be counted as a benefit, then how is a bike any different? A car is hardly “mass transit.” Check out basically any road- most cars are carrying one person.

will p
Reply to  bike geography

Qualified parking is referenced specifically in the statute and does not rely on the interpretation of “mass transit facilities” for its exclusion from income under §132.

I like that Earl keeps trying…though after years of seeing the bike commuter benefit (as currently written) not succeed as hoped, I have to agree that the current commuter benefit has to be reformed into one that is truly multimodal: parking + transit + biking.

Few bike commuters in major cities will give up a fully funded pre tax transit pass for a smaller bike to work payment. This is the playing field we and others are attempting to sell bike parking services within.

Our urban nation’s ‘city states’ need tools that level the modal subsidies AND offer trip flexibility: bike today, bus tomorrow and drive when it rains etc. That is the true state of commuting in the future vs. mono modalism.

So back to the need for rule changes to facilitate Bike Sharing, I would suggest that his staff look into the FTA facility calculations to allow crediting trips delivered to transit stations by bike (bike parking and shared bikes). Remember first and last mile? And add that FTA funded park and rides stop providing free commuter car parking. Instead add car parking as an additional amenity for a combined monthly pass: bus + parking, instead of all riders subsidizing suburban transit riders who also park a car. (Earl/ staff, feel free to contact me.)