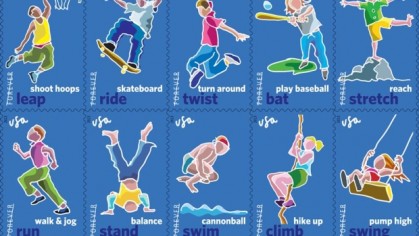 Here’s the global bike news that caught our eyes this week:

Unsafe stamps: The U.S. Postal Service killed a set of stamps depicting kids enjoying physical activity because another federal group said some of the activities might be unsafe. For example: “a youngster is doing a headstand without a helmet.”

Anti-texting cop: After reading that 10 Americans die every day from traffic crashes linked to cell use, a Georgia cop took it on himself to target it. He expects to write 1,000 tickets this year for texting while driving.

Too drunk to choose? A case before New York State’s top court could set (or reject) the precedent that people who are drunk out of their minds can’t be punished for willful indifference to human life.

Auto auto safety: Volvo cars can now automatically hit the brakes and sound an alarm to avoid hitting a person on bike or foot, and other automakers are following suit.

Autonomous car effects: Will the new boom of self-driving cars be good or bad for biking?

Eugene fatality: Oregon State Police have the details on an Oct. 6 collision in Eugene that killed Steven Burch, 56. He was riding a “motorized bicycle.”

Bikesharing and streetcars: They’re both popular with tourists, geographically limited and nice for quick trips, but one is way cheaper. Is bikesharing the new streetcar?

No bikeshare benefits: Charmingly, the IRS has ruled that bikesharing counts as neither “mass transit facillities” nor “a bicycle that is regularly used for travel” and therefore employers can’t deduct bikeshare memberships as normal HR expenses unless Congress acts.

Complete streets in Houston: Even Portland’s archnemesis has just announced a plan to put bike facilities and sidewalks on major streets.

Anti-bike protest: People who don’t like bike tourists are suspected of sabotaging a U.K. bike tour by tearing down directional signs and spraying mud on the road.

No police help: The head of NYC’s police department told an Atlantic reporter that he assumed she was an “advocate” because she asked him if the police could better enforce laws against violent driving. He answered her question, though: he thinks they can’t.

Mandatory biking? Is a major Bolivian city requiring its residents to bike once a week? Cyclicious’ Richard Masoner has some valid doubts, but judge for yourself.

Bike freight: Portland’s April Streeter reports on a study finding that 51 percent of European urban freight could be moved by bike.

Roundabouts vs. stop signs: TV’s Mythbusters show why roundabouts are so much more efficient, but unfortunately focus mostly on their traffic flow, not safety.

Bike lane blockage: Casey Niestat’s hilarious 2011 video of himself deliberately crashing into bike lane obstacles in response to a police order has been making the rounds lately. Worth rewatching even if you’ve seen it beore.

Pavement lawsuit: The City of Tacoma must pay $242,000 to a person who suffered multiple injuries after his bike tire wedged in a pavement crack.

Infrastructure blog: “Light when you press a button, hot clean water when you turn a knob, fresh fruit in January” — it all relies on “fading infrastructure,” and a new Orion Magazine series will look at the process of remaking it.

We’ve got two great videos of the week. One is the longest Streetfilm ever, about Groningen, a Dutch city where most trips happen on bikes. Seeing is believing:

The other is a TED talk from outgoing revolutionary Janette Sadik-Khan of NYC’s transportation department, summarizing her wisdom from years of redesigning her city’s streets:

A head stand without a helmet? Sounds like a job for the Thud Guard™~!!

I’m sure every driver in those stamps is wearing a helmet and a 5-point harness. Totally safe.

Fixed this link – thanks!

That article on the $242K award is further proof of my assertion. Fixing problems before someone gets hurt is cheaper.

Hope the cyclist will make a complete recovery.

Opus the Poet
Reply to  K'Tesh

A big part of the reason for that judgment was the defect had been coned off for a while and then the cones were removed without repairing the defect. I don’t know about you but when I see defective pavement was coned off for an extended period of time (longer than just overnight) and then when I ride through the area in the dark and the cones are gone I assume the defect is gone as well. The cyclist made much the same assumption, as would any driver.

Sabotage of bike routes? Happens all the time in SE Portland. I wish it were simply mud, but broken glass is placed in bike lanes. This is not random broken bottles or car window glass, it is sabotage and it is placed where avoiding it is more dangerous than running through it. I have taken broom to it a couple of times, but just can’t keep up.

Yeah, I encounter this all the time, as well. On the West Side, I recently ran over an entire pile of nails left neatly in the lane (and in a color matching the asphalt). Sad.

That Katrina Johnston-Zimmerman piece was a bit silly. The central city plan isn’t proposing raising the height limit above 460 feet, just in some neighborhoods. Not to mention Vancouver and Melbourne are perennials on livable city lists, both with a plethora of high rises.

I am very glad it showed up in the monday roundup, though! Perhaps more relevant land use/real estate will keep trickling in here?

I’m more worried about swinging without a helmet. I used to FLING myself from the swings when they would be like 8′ in the air up into the gravel. In my day we didn’t have that splintery “safety mulch.” We had pebbley gravel that made your hands and knees all knubby and chalky white. Veritably FLING.

Kinda reminds me of this:

Here’s another one for you!

I hope they make their goal, but it’s not looking good. Truly amazingly engineered/designed bikes. I hardly notice my 9-year-old on the back, and he’s about 85 lbs.

My big takeaway from the Ted talk is that as long as a change only involves paint, it is often worth trying it to see if the change is acceptable and “works”. Hey Barbur road diet, how about trying a little paint for a month? If it doesn’t work, change it back!

I can see them being upset about the cannon ball. That is kind of like a gun thing. Kids aren’t allowed to point their finger and say bang any more without being expelled from school. A canon ball is just so much worse, it is a WMD.

RE: Stamps: Correction, it wasn’t the USPS which was unhapy with the stamps, it was the Presidential Council on Fitness, Sports and Nutrition raised the objection.

>>archnemesis ?? time to put away the comic books Michael

Ha! The more you look at it, the truer it gets:
http://portlandafoot.org/w/Houston

“We have repurposed 26 acres of car lanes into pedestrian space.”

Sadik-Khan’s video makes me envious. When will we see a Portland City administration that is not cowed by Oregonian commenters.

That Netherlands town reminds me of the biking infrastructure in Tokyo and around Japanese towns. They all have large parking areas for bikes at the train stations, grocery stores and apartment buildings with these mechanical bike rack stacking systems. They also have covered shopping streets for every neighborhood that can only be used by bikes and on foot.