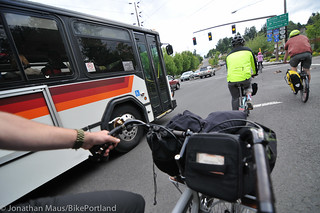 After five years of service cuts and rapid fare hikes, people who ride TriMet are getting a measure of relief.

It’s also considering an advocacy group’s campaign to extend transfer times from two to three hours, softening the bite of recent fare hikes for people who pay cash for short round trips.

We’ve been watching TriMet’s budget rollercoaster for years, asking in both 2011 and 2012 whether worse transit would lead to more biking. And though the answer is complicated, years of transit cuts since 2008 don’t seem to have done much to citywide biking rates, which haven’t budged since 2008.

The agency says the additional bus service-hours required will cost about $3.1 million annually, counting additional fare revenue on the lines. Bringing every frequent bus line back to its 2008 frequencies during both day and evening hours would cost more: a total of about $7.8 million, the agency figures.

TriMet’s annual operations budget, which doesn’t include new construction, is $489 million, two-thirds of which goes to driving and maintaining its buses and light rail lines.

“My focus has been to restore Frequent Service, and I’m so pleased we found savings in our current budget to allow us to reinvest in this network,” TriMet General Manager Neil McFarlane wrote in the agency’s news release.

Bus Riders Unite, the transit riders’ group organized by OPAL Environmental Justice, applauded what its associate director called an “incremental” service improvement, but said that frequent bus service should be coupled with extending fare transfer times to three hours, long enough for more midday round trips and multi-transfer rides across the region.

Though the relationship between biking and transit is hard to pin down, every city in the developed world that’s known for good biking also has frequent, reliable and popular mass transit.

“While there are many good reasons to increase frequent service lines, equity isn’t one of them,” OPAL Associate Director Vivian Satterfield wrote. “Some frequent service lines serve a lot of low-income people and people of color, but others don’t. … The equity case for longer transfer times is quite clear, and is an essential complement to incremental service changes.”

Extending transfer times would have the biggest appeal for people who don’t ride transit enough to buy monthly or weekly passes, who don’t have enough money at one time to buy a pass, or who frequently use it for round trips that aren’t work commutes.

Satterfield said she was “confident” that a board member would introduce a formal proposal next month to extend transfer times, and that the board seems open to “tackling” the issue.

Though the relationship between biking and transit is hard to pin down, every city in the developed world that’s known for good biking also has frequent, reliable and popular mass transit. That may be because bike and transit trips combine with each other well; it may be because, in combination, they make car ownership less important; and it may be because good transit helps free up road space that can be used to improve biking.

As we write frequently, people aren’t obsessively loyal to one mode or another; they switch fluidly among buses, cars, bikes, feet and skating based on lots of factors. Back in 2009, just before TriMet started hacking into its frequent service buses, we wrote that Portland was “primed for a low-car diet.” Hopefully these moves by TriMet are among the many factors it’ll take to get us back on that wagon.

Not entirely on topic, but I want to acknowledge Trimet’s bus drivers.

I’m on my bike in the city every day of the week, so I frequently interact with Trimet buses. Cyclists and buses often get into a leapfrog dynamic, passing and re-passing each other multiple times per mile.

My observation is that our bus drivers do a very good job of watching for bikes in their mirrors, waiting for bikes to pass by before pulling out or changing lanes, and leaving ample space when they pass bikes.

Of all the types of vehicles on Portland roads, I feel Trimet buses are the safest to be riding around. (The least safe, in my opinion, are commercial delivery vans/trucks and garbage trucks.)

I feel bad for the drivers on Vancouver during rush hour. Gotta cross that heavily trafficked bike lane for every… single… stop. No way I could deal with that kind of stress!

except yell, menace cyclists and swerve/honk at them; as is the case with several of my friends and coworkers stories from downtown and daily commutes and that I hear almost every day heading to work from the driver’s mouth and see from their actions. It’s OK. From what I heard at least one driver received “disciplinary action” recently. Don’t know if that just means a couple days vacation.

Chris I
Reply to  BIKELEPTIC

How many cyclists are are that, by law, they need to yield to a bus as it attempts to pull out from a stop? This, I would guess, is a big source of their frustration.

BIKELEPTIC
Reply to  Chris I

or they just don’t like slow things on the side of the road. They are constantly cutting off cyclists in the bike lanes by accelerating to get ahead to their stops, thereby endangering cyclists, not yielding to the cyclist in the right until they passed. I see this not only as a passenger on the bus but first hand a bike commuter. Cutting off with right turns, when cyclists are going straight, etc. I could go on. There are times I wish I had a hidden cam to record my daily commute both on & off the saddle for this kind of behavior.

Agreed. Moreover, sometimes when I’m cycling on a road where there isn’t room other traffic to safely pass me, I’ll pull over at a sensible point. TriMet drivers are pretty much the only ones who ever give me any acknowledgement of the courtesy.

Will
Reply to  John Liu

I couldn’t agree more, John. My interactions with TriMet busses on the road are usually when I’m on a bike and they’re nearly all positive or unmemorable in a safe-and-routine way. The only vehicle operators who I see doing a better job of staying in the correct lane position are…TriMet’s train operators. 🙂

Will
Reply to  Will

Oh – and I can’t forget a personal thank-you to TriMet. I rode line 12 for years with my bike. It’s a busy line, day or night, and I regularly encountered full bike racks and completely full busses. It’ll be a great relief for everyone in the Portland-Beaverton-Tigard-Tualatin-Sherwood corridor to have service back up a notch. Loading a bike on a bus was a refuge in a storm of harrowing conditions along Highway 99.

I don’t have the same experience. Cycling from downtown over the Hawthorne Bridge and onto SE Madison, I frequently have frustrating or dangerous interactions with bus drivers who engage in any of the following behaviors:
*Making right turns across the bike lane without fully looking for bikers and almost right-hooking bikers.
*Making no effort to pull truly over to the side of the road for a stop, leaving the rear half the bus blocking the bike lane unnecessarily
*Pulling back into traffic across the bike lane without signalling (if they signal and light up their little yield sign before I reach them, I’m happy to yield)

extending transfers with the new automated printers basically means going back to the way it was before the printers. Drivers almost always gave you extra time when they hand tore tickets. In practice the electronic fare receipt printers have been a cut to transfer times.

TriMet’s code states that time on manual transfers is supposed to begin at the end of the route or downtown Portland and be rounded up, instead of when the rider boards.

This is a small step towards truly making Portland a city that is easy to live car-free, and it is appreciated. But we need more. We need more frequent service during midday, evenings, and weekends. We need true night bus service that serves people past midnight-1AM. We need to think about the gaps in our city’s transit network and work to address them such as north-south routes between 12th and 39th/Cesar Chavez and between 122nd and 181st out in East Portland/Gresham. Or how about making the Fremont line useful again, connecting it to Downtown?

Most important of all, we need the density to make these investments cost-effective! After all, Portland’s car-free future won’t be built on the foundation of endless single-family residential neighborhoods. More upzoning to encourage multi-family development is needed, including no-parking apartments.

And why wouldn’t you mention “trains” among the modes of transport that people “switch fluidly” between? A curious omission from you, Michael.

I wonder how this situation is handled in other countries. Somehow I can’t imagine they cut bus lines or trim service because economic growth wasn’t what it once was, only to bump it back when employment rises (or whatever the indicator is we’re using here–it isn’t clear to me).
Germany, England, France? Japan? Anyone?

I recently took note of the latest fares for bus rides: the $5 round trip on a Tri-Met bus seems shocking to me. It makes personal justification of some new cycling gear for cold/wet weather a little easier….

I’m extremely dependent on TriMet. Although I only ride buses occasionally, I do ride MAX (with my bike) every weekday and would be screwed without them. I’m incredibly fortunate to have an employer-subsidized pass, so I haven’t been affected by the fare increases and the new transfer policy, which IMO are both ridiculous. At a minimum I’d like to see transfers expanded back to 3 hours. The current policy is a particular burden on the poor.

But in the meantime, three cheers for restoring Frequent Service, which TriMet made a big fanfare of rolling out a few years ago … only to quietly cut it when the economy tanked. Regular service along major lines is essential to helping people get out of their cars.

Personally, I rarely have problems with TriMet drivers, and I regularly have to play the bike-leapfrog game with them, both on Hawthorne and on Beaverton-Hillsdale as well as occasionally on other roads. I’m sure it’s equally annoying for cyclists and bus drivers, but sometimes it’s unavoidable. I try to pause and give the bus room (often with a wave) if the driver is signaling to pull out, and in return I expect that the driver has enough situational awareness to not pull sideways into me and to signal before pulling out. Most of the time everything works out OK.

I can attest that the reduction in service and the strict 2-hour enforcement have influenced my decision to ride my bike more and use Trimet less. Frankly, five bucks for a round-trip cash fare is a lot of money and I would prefer to save it for things that seem like a better buy.