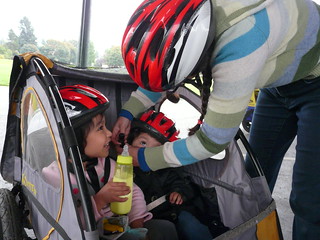 “They’re expensive, but folks really want to take kids out with them while bike riding. There’s got to be somebody out there making a low-cost trailer that’s going to be acceptable to a low-income person.”
— Tony DeFalco, Living Cully

“They’re expensive, but folks really want to take kids out with them while bike riding,” said Tony DeFalco of Living Cully, the neighborhood’s antipoverty-focused ecodistrict. “There’s got to be somebody out there making a low-cost trailer that’s going to be acceptable to a low-income person.”

DeFalco is hoping to secure a trailer donation that his organization could use as a raffle giveaway. Gordon said Hacienda is weighing whether to give a trailer to one family or try storing it in a community space for public access.

Hacienda’s Anna Gordon, who coordinates bike activities at the Latino-targeted low-income housing community, agreed that there is “definitely high interest” in bike trailers among the group now. She said it’s one of several barriers to bike access for people in the community.

Another obstacle is Hacienda CDC’s own homes, which Gordon said don’t offer space to park a bike trailer. Other barriers include bike theft and a lack of knowledge by some riders of how to safely use the road.

With an eye to improving access, Living Cully is partnering with the Portland Bureau of Transportation for a series of walks and rides, called Living Cully Walks, that will help people in the area learn the best routes around the neighborhood without a car while also helping the city understand weak links in local transportation networks.

Gordon said she likes the fact that bikes are integrating fully into the lives of the people she works with.

“It’s exciting — it’s a bigger picture around actually getting people access,” she said.

Is the CCC registered as a charity? Can they take tax-deductible donations? Doesn’t the State of Oregon “give” each person who pays state income tax a $50 credit towards tax-deductible donations? I ask these questions because it is getting late in the tax year and if the answers to all of those questions are “yes”, I know who is getting my $50 this year.

Imagine if a bunch of us all did this….

The $50 credit isn’t for 501(c)3 groups. It’s a political tax credit. A $50 donation to CCC is still deductible, but you don’t just get it back the way you would for a political donation.

Steve B
Reply to  dwainedibbly

You might be thinking of the Oregon Political Tax Credit
http://www.oregon.gov/dor/PERTAX/personal-income-tax-overview/pages/credits.aspx#Political_contributions_ORS_316.102

In that case, it’s only available if you send that money to political candidates, PACs or political parties.

But don’t let that stop you from donating to the CCC! They’re awesome.
http://www.communitycyclingcenter.org/index.php/support-us/

dwainedibbly
Reply to  Steve B

Thanks Steve & Heidi. The politicians like to keep all of the good stuff for themselves, don’t they?

Sadly, bike trailers catch the eyes of bottle & can collectors. Someone close to me had his stolen (off his bike).

ORS 811.195 seems to pretty clearly prohibit any passenger in a bike trailer on any Oregon public road (subsection (1) states that “A person commits the offense of having a passenger in a trailer if the person operates a vehicle on a highway while towing any type of trailer that contains a passenger” and none of the exceptions in subsection (2) seem applicable to bike trailers. In the vehicle code, highway means pretty much any public road and since ORS 811.195 refers to vehicle rather than motor vehicle, it should apply to bikes because its not a statute that “by its nature” is inapplicable to bikes.

I don’t think anyone has been cited under this law, but the BTA should put it on their agenda to fix this. With the number of shops and non-profits promoting what appears to be a technically legal activity, there should be liability concerns that could have serious ramifications if there is any sort of serious injury to a child passenger in a trailer.