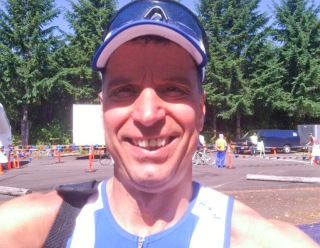 Portland Police Chief Reese snapped this self-portrait
at the Hagg Lake Triathlon back in July.

Portland Police Chief Mike Reese will be hitting the streets this weekend; but he won’t be in a patrol car. He’ll be in spandex.

Chief Reese will be one of over 1,000 competitors at the seventh annual Portland Triathlon, which takes place on Sunday in St. Johns. In a telephone interview this morning, Chief Reese told us he’s been competing in Triathlons since 1990 and this will be the fourth triathlon he’s participated in this year.

Of the three disciplines in the triathlon, Chief Reese says the bicycling leg is his strongest. But the humble head of Portland’s Police Bureau ads that, “I’m really just average. My strength is that I’m average at everything.” Reese told us he competes in the “old and slow group.”

A southwest Portland resident, Reese said he does his bike training in the hills around his home and spends quite a bit of time pedaling the Springwater Corridor. Another favorite training ride is to head north on Highway 30 and then do the 12-mile loop around Sauvie Island. Marine Drive is another favorite route.

On Sunday, Reese will compete in the Olympic distance event which means he’ll start with a 1.5 kilometer swim, then a 40 km bike ride, and finish with a 10 km run. The Portland Triathlon course starts at Cathedral Park, then heads north toward on Lombard toward Kelley Point Park then east on Marine Drive to a turnaround at the intersection of North Portland Road.

As for why he does triathlons, the Chief said he likes the cross-training benefits. “It gives you something new and different to do every day. I have a spin bike at home, so the other day I got on that and did a spin for thirty minutes, then went out and did a run.” He also enjoys training with other officers and friends, including his 20-year training partner, Gresham Police Department Lieutenant Pat Williams.

Triathlons and all the cycle training are also a great way to stay in shape, Reese says.

Portland Triathlon organizer Hilary Johnson said they’re expected a record turnout at Sunday’s event, which is also a USA Triathlon National Championship qualifier. Johnson said triathlon is growing in the Portland area thanks to a strong running and biking culture and the improved water quality of the Willamette River, which is a popular swimming spot.

Johnson doesn’t have anything special planned just because Chief Reese will be among the racers on Sunday. And it seems like the Chief prefers it that way. For someone with such a high-profile public position, Reese is looking forward to blending in. “No one will know its me out there.”

Good luck Chief! And I look forward to bumping into you on a future training ride.

surprise! He’s a person! He has a life! Reminds me of kids thinking their teachers go into cabinets at the end of the day, and come out in the morning.

Ha! I know exactly what you’re saying Lynne… and that definitely crossed my mind when talking with him. But I still feel it’s cool/good for the community to know about this because it shows he is out on the same roads we are on, dealing with the same issues… and at some level he understands cycling issues better because he actually does it.

so is the bike portion on closed streets? it’s 40 km through St John’s and NoPo so I would suspect that they’d be racing on open streets except the St John’s core… sounds like a lot of scofflaw cyclists racing through quiet parts of town to me…

Why don’t they use PIR?

I’m not sure if you’re serious or not. The trick with short distance (sprint/olympic) triathlon is the swim/bike/run all need to start/end from/near the same place unless you want to have two separate transition areas. I raced Portland Tri last year and there really wasn’t much conflict with other road users. The races start early and are usually finished by 11am.

I’m guessing you’re mostly joking but for those who are curious, the course description is here:

The bike portion is on Lombard and Marine Drive which are pretty industrial and see very light traffic, mostly trucks, on the weekends. The roads are oversized, built to accommodate freight, so there’s ample passing room. Still, I’ve had at least one person in a passing car yell to me to, “Get on the sidewalk!” when I was riding in the far right and there were no other vehicles on the road.