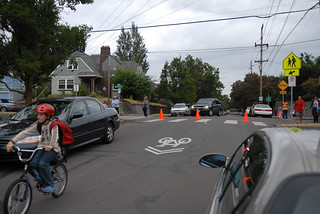 School’s back in session and for some folks
the reminder came in the form of a traffic citation.
(Photo © J. Maus/BikePortland)

During a two-week period that coincided with the start of the school year, the Portland Police Bureau issued well over 1,100 citations to people who violated traffic laws in school zones.

According to PPB Sgt. Tim Sessions, during the first day of “Operation Safe School Return,” photo radar units nabbed 400 speeding motor vehicle operators. After the first week, the number went up to over 800 (word spread fast apparently, because he said by the second week that number went down to 75). At the end of the two week mission, the PPB had issued 1,193 citations.

“I wasn’t surprised at all,” said Sgt. Sessions in a phone interview this morning. “People don’t remember that school is starting,” he said. “It’s like when it starts raining and the first thing you should do is slow down because the roads are slick, but people forget.”


Sgt. Sessions said the mission included about 15 schools throughout the Portland area. The schools chosen for heightened enforcement were selected through a variety of measures including: a database of citizen complaints provided by the Bureau of Transportation (PBOT); information gleaned from parents and principals by school resource officers; and from the PPB’s own list of known traffic safety problems on “busy streets.”

Officers were especially busy, Sessions said, around schools on major arterials in outer east Portland. He specifically mentioned schools near SE 148th and Division, SE 109th and Stark, and two schools on NE Glisan — one at 125th and other at 153rd. “Even with the flashing beacons and kids and parents walking on the sidewalk,” he said, “People just disregard that.” Speeding and unsafe driving is especially bad on streets where the school isn’t visible from the busy street.

PBOT is an active partner with the PPB in these missions. On their website yesterday, PBOT listed several back-to-school traffic safety tips:

On that last tip, PBOT forgot to mention that if you’re riding a bicycle you’re also much less likely to get a speeding ticket.

“Even with the flashing beacons and kids and parents walking on the sidewalk,” he said, “People just disregard that.”

Hm. ODOT/Barbur, are you listening.

The speed limit should be 20mph on all neighborhood streets, not just near schools. It’s a safety issue for all pedestrians and cyclists.

it should be 20mph in the entire city, all the time…

You will rarely get a ticket for speeding 5 or even 10 mph over the limit, so 99.99% of people on bikes should be fine. If someone are racing at 35 mph on a road bike, past a school zone, that’s another matter.

I think 30mph on arterials is acceptable, and probably all that we can hope for. I for one, would be absolutely floored if we could get arterials lowered to 30mph citywide, with neighborhood streets at 20mph.

Pete
Reply to  Chris I

I agree with you entirely. I wonder, though, how many folks here have actually tried to drive a modern car on a wider 25 MPH road and actually stay at that speed… it’s actually more difficult than it seems. I frequently have to drive on Grant Road in Mt. View, CA (a road I more often cycle btw), which is 25 MPH for most of it. I easily find myself at 30 MPH and that’s while TRYING to stay no more than 25 MPH, which of course is frustrating for scores of drivers behind me who’d likely do 35+ MPH here unfettered (hence the presence of speed bumps, radar signs, and police officers – a necessary waste of money IMO). I’ve played around with the cruise control at 25 MPH here (it does OK), but frankly I think using cruise control on a street requiring this low a speed limit poses a danger in itself.

My point is a +/- 5 MPH or even +/- 10 MPH variance in today’s smooth, quiet, powerful cars is quite often imperceptible at these low speeds. (Yes, I get that we’re talking about narrower city streets, I’m just putting on my Devil’s Advocate cap). Fear not, though, the days of wireless transponder-based speed limiting technologies is coming… 😉

Maybe it should be more difficult to obtain and keep driver license. I took one of those DMV tests recently and it was only perfunctory. It explains alot of bad stuff I see out on the road.

AndyC of Linnton
Reply to  Suburban

It’d be nice if you had to at least obtain a “100%” on both the written and driving tests, and then had to re-take the test every so often.

“It’s like when it starts raining and the first thing you should do is slow down because the roads are slick, but people forget.”

has Sgt. Sessions ever been in commute traffic during a first rain? people don’t forget to slow down… every time it rains traffic is crawling…

how do we receive a list of “school days” that many of these 20 mph school zone signs refer to?

I checked my local school district’s webpage, they list the days when there is no school. Also, I ask my co-workers with school-age kids.

Since I have a kid in PPS schools I know their schedule, but I don’t know the schedule for Beaverton where I work. Best to just assume school is in session any weekday between late August and mid-June.

Just better to assume that from September to June and from 8am to 4pm that the school zone is in effect. Why play the game of saying, “well today is a school holiday, so let’er rip!”?

Don’t get busted in Tualatin or Tigard! School zones are in effect there from 7am until 5pm.

I always assumed Mon-Friday, day after labor day until the first Monday in June when you realize there’s no long traffic in morning.

Fortunately, on my commute, pretty much all the school zone signage has been changed from set times (7am until 5pm) to flashing lights that are manually activated on school days.

I live two blocks from Richmond school, and in my experience parents dropping kids at Richmond are the nuttiest drivers. (“Oh god, my baby is going to be late to school, must hurry!”)

This is my experience as well. I wonder about humanity sometimes…

OMG, try commuting past Chapman in the morning, as I used to do years ago. Richmond has NOTHING on that school.

Any bike tickets there?