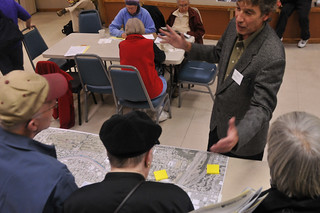 A pair of key job openings, one very large and one quite small, could help the Portland Bureau of Transportation pivot into an agency that, at every level, prioritizes the movement of people instead of the movement of cars.

Or the other way around.

The big position is the city’s transportation planning manager, a role recently vacated by Paul Smith. As head of the team that sets big priorities for the city’s streets and then convenes stakeholders to work out specific plans to change them, the new planning manager will set an important tone for the office.

New PBOT Director Leah Treat said in an interview with BikePortland last week that upon joining the department, she personally rewrote the hiring description to fit her goal of finding “an unconventional person” for the role.

“This is not just a veteran planner,” Treat said. “I want somebody with creativity and imagination. I want somebody who wants to bring innovation. … One of the things that we’re going to need is to realign ourselves in environmental justice issues, equity issues. But I’m also interested, in many of the plans that we launch, involving a livability perspective and involving art.”

I asked Treat for a small example of what she meant by innovation. Though she noted that this might not be possible, she raised the example of a crosswalk signal that could be activated by giving a device a high five rather than just pushing a button.

“I see examples from cities all over the world that are doing really cool things with their infrastructure,” Treat said.

The work will take “a real dynamo,” Treat said, with “strong leadership skills for the internal team” as well as “serious strong emotional intelligence” to work with partner governments.

“We think this is one of the best planning jobs available in the United States right now,” PBOT spokesman Dylan Rivera said.

The second job open at PBOT is down the hierarchy, and it’s the sort of thing you’ll often hear people claim governments don’t need: a professional communications and social media assistant who’ll earn $22.39 to $34.49 per hour “to inform, educate and engage the public, primarily through online and social media platforms (website content, Facebook, Twitter, YouTube with additional possibilities through Pinterest, Scribd and other platforms) but also with traditional communication methods.”

This one is a newly created position, described as “temporary” and maybe also part-time. But the way ideas are communicated matters a lot, so you’ll never hear BikePortland downplay the importance of government employees who are good at explaining the government’s work to the public.

It’d be ridiculous for a private company with PBOT’s $340 million annual budget to scrimp on communications staff — let alone a company that had to report to 594,000 shareholders and to more than a million daily customers. And if that company were a public agency, underinvesting in communication wouldn’t just be dumb; it’d be unjust.

Let’s hope the people who land in both these positions help Portlanders talk clearly and honestly with each other about what we really want.

wow, I would hope that applicants will come up with better examples of innovation (her “innovation” is not only completely unnecessary, it also may be more difficult for persons who use wheelchairs).

And I hope that Leah recognizes that those examples are in fact better.

Pretty tight deadline for applications. do you know when it was posted?

The job was posted a while ago. We’re reporting now because we think the city’s hiring choice is significant, not because anyone thinks the position has failed to find its way to strong applicants.

I looked in the job description and it was a lot different than what your post mentioned. (Is it a different job or did they reduce it since you interviewed them?)

I was talking about the posted salary range.

why do people need to push a button (or worse, give a post a high five!) to cross a street? That is a very very back-asswards example of ‘innovation’!

Agreed! “Beg buttons” for pedestrians are one of my pet peeves. Drivers don’t have to do anything special to get lights to turn for them, why should pedestrians? And it’s not just something extra to remember and do (which is a hassle and a burden in and of itself), it also lengthens travel times for walkers, e.g. if you get to an intersection right when the light is about to turn and haven’t yet pressed the button so you don’t get a crosswalk signal until the next light cycle. Grr!!

if you get to an intersection right when the light is about to turn and haven’t yet pressed the button so you don’t get a crosswalk signal until the next light cycle.

I hate when this happens! I usually just end up walking anyway unless it’s a wide road with little traffic and I think the light will change before I make it…

IMO, the walk sign should appear with every green light! A button could shorten the green for cross traffic, or lengthen the green to give peds more time; not offering a walk sign (in fact, giving a do not walk) without someone pushing a button strongly discourages pedestrians and highly over-prioritizes vehicles

A good example of innovation would be to remove walk buttons and instead put walk cycles into all light cycles as mandatory – at least within a 4-5 miles radius of downtown Portland.

The burbs are so car dependent I’m sure they’d raise hell at this prospect.

Agree. “Innovation” in this area is going back to the old style where pedestrians always get a walk signal, or changing to uses visual/infrared sensing for people walking, if the cost is worth it.

Every day I cross 2 intersections on the 205 path at Washington and Stark (a couplet) where you have to push a button to get a walk signal, despite the fact that all 3 streets are one-way! There is never any time at which this is necessary, because the signal phase is always long enough to cross the street.

These buttons should be removed, or at least the walk signal (and a bike green light) should be activated whenever the cross-traffic gets a green, and the button could just lengthen the time of the walk signal.

There’s a lot to debate about pedestrian push buttons. I agree with the commenters and appreciate the “beg” button analogy, but would also counter that in many cases when I am riding my bicycle and getting stopped by a traffic signal that is serving a pedestrian that isn’t there, (happens often outside of downtown) that innovation is not part of the equation. The buttons serve a purpose when it isn’t likely to be pedestrians present and the crossings are very long.

There’s also a case to be made for pedestrian push buttons that provide the blind community with locator tones that give information to those that are walking that need to know where to start their crossing from.

I took these videos/pictures in The Netherlands and would be curious whether folks think this is an innovation worth pursuing.
http://koonceportland.blogspot.com/2011/07/bicycle-countdown-signal-time-to-green.html

Spiffy etal-
Portland traffic signals are timed fairly short, there’s great debate about that too. I agree with you, so if you have complaints about signals in Portland, call them into 503-823-SAFE.

Joseph E-
Send your complaint to ODOT on I-205, that signal is operated & timed by them and it should be operating fully actuated in those off-peak hours and ideally would be more responsive to multimodal traffic on the I-205 corridor. Bike signals are not part of the national recognized Manual of Uniform Traffic Control Devices. I serve on a Committee working to change that to be more reflective of the National Association of City Transportation Officials Urban BIkeway Design Guide which does recognize bicycle traffic signals as a national standard. There’s considerable resistance from some within the engineering community, but by using the examples from Portland and other communities (http://www.its.pdx.edu/upload_docs/1354724032.pdf) and having information about the compliance of bicycle signals (http://www.its.pdx.edu/upload_docs/1375305998.pdf)

Peter, I guess I might be delayed by pedestrian countdowns sans pedestrians when I’m on my bike once in a while if my routes (on neighborhood greenways) had more signalized crossings of major streets! As it stands though, I scurry across major streets e.g. SE 50th & 52nd & Clinton / Woodward, SE 42nd & Division, SE 42nd & Belmont, SE 42nd & Stark, SE 42nd & Holgate, ….

Are the push buttons downtown only for blind/disabled compliance and have no impact on the presence of a walk signal? That would be good to know / mark somehow! There are buttons at at least SW 1st & Main and every Naito crossing. Pedestrians are very common at all those intersections.