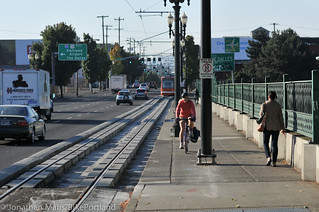 The presence of streetcar tracks on the
MLK/Grand couplet has degraded the bicycle
network on the central eastside. That’s one of many
reasons we need smarter planning in this area.
(Photo © J. Maus/BikePortland)

One of the most important neighborhoods in Portland, the central eastside industrial area, is changing fast and the City of Portland is looking for help to nudge the changes in the right direction.

As tech startups remodel warehouses and the new streetcar and MAX lines bring more housing, offices and retail into the area between the Willamette River, SE 12th Avenue, Interstate 84 and SE Powell, the city is updating its plan for the area and looking for stakeholders to join the Southeast Quadrant Plan Stakeholder Advisory Committee.

Members must “be able to commit 4-6 hours every month, which includes preparing for and attending monthly meetings (typically held in the evening), and attend workshops, charrettes and community involvement events,” according to the city’s application website. Applications are due Oct. 3. 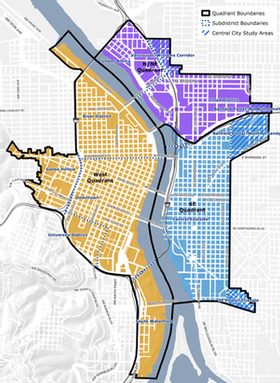 The blue area is the Central
City’s “Southeast Quadrant.”

This is an important area for the future of local biking, since it includes three of the five best bridge crossings (Burnside, Hawthorne and the new TriMet bridge opening in 2015), a potential future highway crossing at NE 7th-9th (along the route of a proposed future neighborhood greenway that would connect northeast and southeast) and many future origins and destinations. This effort is an element of the broader Central City 2035 project to update the 1988 Central City Plan.

Currently, the bicycle network is very inadequate throughout the central eastside. Since someone fell asleep at the wheel and forgot to include a bicycle facility along with the new streetcar line on MLK Jr. Blvd. and Grand, the low-stress bicycling options in this area are very few and far between. The streets west of MLK/Grand are busy with delivery trucks and other industrial uses, while the streets east of the couplet have many tricky crossings. SE 7th is one option, but as a recent serious injury hit-and-run illustrates, that street is far from what we should expect in America’s most bike friendly city.

We need some smart and dedicated bicycle-centric minds to serve on this committee! You can read more about the application process on the BPS website.

I’ll keep my fingers crossed that the Advisory Committee can do anything, but after seeing the changes one stakeholder in the Lloyd was able to push through (and the ease/speed with which they did it), I’ll keep going far out of my way to get home. This is just lipservice…

Maybe the superblock will give the impetus for a 7th avenue bridge? Assume the Gault position.

OMG, you’ve got to be kidding; this is already one of the safest, lowest traffic places to ride in the inner city, but no doubt riding conditions will deteriorate fast once gentrification really starts to take hold.

In my opinion, 7th is preferred for 2 reasons:
1. It goes much farther north and south without interruptions
2. It better serves bikes and Peds who want to go where the MLK/Grand couplet goes, but are unwilling to risk their life riding down those streets

great timing! PBOT recently added right-turn only at SE Stark for vehicles traveling on 6th Ave. That puts bikes ON Stark (crappy) to MLK southbound or trying to take a left on 7th as traffic on Stark piles up behind you! Also, trying to follow the Salmon street greenway to the Esplanande is sub par: terrible signal timing on Taylor and massive potholes means you are almost waiting at MLK, and the signal is red for almost 2 minutes! Then trying to get left on to Water?! ugh.

I hope this means we can talk about adding bike lanes AND sidewalks on to the BRAND NEW BRIDGE they built for streetcar from MLK to OMSI!

“The presence of streetcar tracks on the MLK/Grand couplet has degraded the bicycle network on the central eastside.”

Yes because before the streetcar MLK and Grand were cycling paradises!

You want to know what the streetcar project should have paid for? Signals at every intersection on MLK/Grand from Stephens to Broadway. Those high-speed traffic sewers are what degrades the pedestrian and cycling experience in CEID, NOT streetcar tracks.

Re: the map. They are dividing the Central City into 3 quadrants: West, North, and Southeast. And I thought 5 “quadrants” was bad enough!

My application has been submitted!