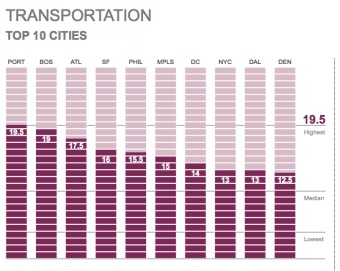 Portland ranked #1 in the transportation category.

The City of Portland has earned a #2 ranking in the first-ever “City Energy Efficiency Scorecard” released yesterday by the American Council For An Energy-Efficient Economy (ACEEE). We came in behind Boston, but ahead of major cities like San Francisco, New York and Seattle (a total of 34 cities were included in the study).

Here are the “Best Practices” the ACEEE listed in the Transportation category:

Portland Mayor Charlie Hales pointed out that this strong showing comes on the heels of our designation from the United Nations as the “Number 1 Green City in North America.” In a press release, Hales said, “From 1990 to today, our population grew from about 440,000 to about 600,000. But our carbon emissions over that same time fell by about 28 percent. We’re pretty proud of that.”

Asked specifically how bicycling figures into the city’s energy footprint, Mayor Hales said via email, “We’re taking a one-size-doesn’t-fit-all approach. It’s biking and walking. It, bus and light rail and streetcar. It’s smart urban design, with livable, walking neighborhoods. It’s even paving, because good roads are a factor in increasing fuel efficiency for cars. We can’t be satisfied with any one approach. And we’re not.”

Check out the full infographic and see how other cities stacked up in each category on the ACEEE website.

Surprising given our relatively low percentage of transit users. We are rated 28th on the American Community Survey 2010 results. Bikes must be taking up the slack.

How is Atlanta #3?!? All the cars and traffic, plus MARTA really isn’t that great. I’m a bit skeptical of this study if ATL can come out so high on the list.