“Shall the City increase fees up to three percent on utility reserves and establish a four and a half cent per gallon motor vehicle fee to reduce pollution, conserve energy, improve streets?”
— Question on poll conducted this week by Portland Mayor Charlie Hales.

This morning, the Willamette Week broke the story about a poll performed by Mayor Charlie Hales’ office last night asking Portland residents about their opinions of a potential carbon tax. We’ve followed up with the Mayor’s office to find out what — if anything — the poll questions included about whether or not any new tax revenue would be spent on transportation infrastructure.

Hales’ Communications Director Dana Haynes confirmed the poll, and added that, “The questions are designed to assess the feasibility of a carbon tax, as the mayor and the city explore options for new revenue. While we are a long away from saying “yes” or “no” to a carbon tax, it is our responsibility to think broadly and creatively, regarding ways to be good stewards of the public’s money for services we provide.”

So. What exactly did the poll ask?

The 28 question poll (PDF) was carried out by FM3 Research. It started out by asking whether folks would support or oppose a “small increase in taxes or fees to fund City services.”

The next question addressed the carbon tax idea directly: “Would you support establishing a local tax on carbon pollution to help reduce the impact of climate change?”

The poll conductor then read a potential title of a ballot measure that could potentially include a carbon tax and asked people how they’d vote on it:

“The measure may be entitled, “Establish Carbon Pollution Fee; Improve Air Quality; Energy; and Street” and may read as follows, “Shall the City increase fees up to three percent on utility reserves and establish a four and a half cent per gallon motor vehicle fee to reduce pollution, conserve energy, improve streets?”

In terms of how the new revenue would spent, the City says it would raise $27 million annually and would go to:

Given that not everything could be funded, pollsters then asked how respondents would prioritize a list of project types. Here are the project descriptions: 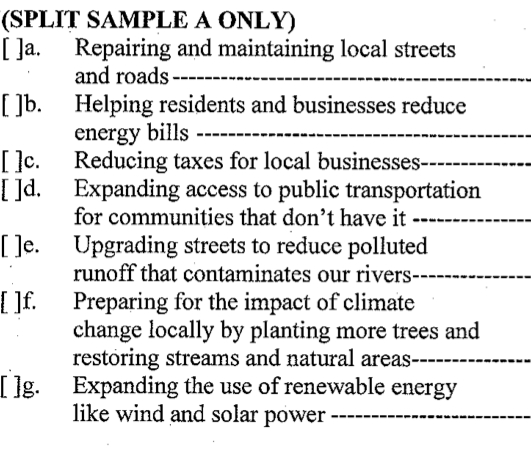 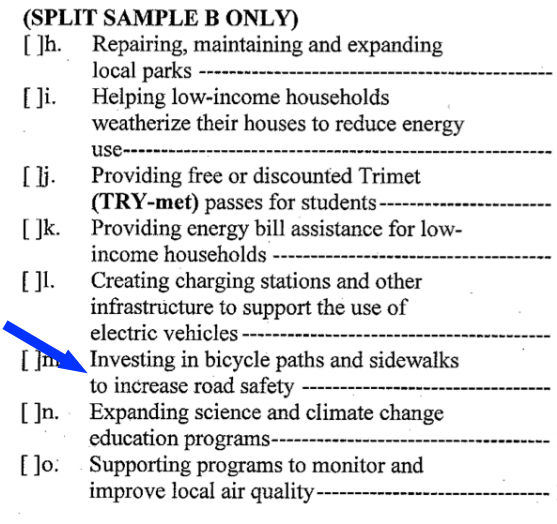 Ironically, given the last post we published about our constant focus on “safety” when discussing bikeway improvements, you’ll not that the only mention of bicycles in this entire poll was accompanied with, “to increase road safety.” It’s also worth noting that there’s no mention of improving bicycle infrastructure in the main explanation of how the money would be spent (nor was there a mention of bicycling in the Willamette Week story). This is likely by design from City Hall. They know all too well that the politics of sidewalks are good and devoid of controversy; however any whiff that this money would be spent on bicycling is likely to generate much more controversy.

That being said, City Hall is too smart to leave bicycle investment out of an idea like this. So even if they don’t say it directly, “access to public transportation” and “reducing air pollution” are both categories where bicycle-specific investments could go.

It’s great to see the City putting out feelers for a new revenue idea and it’s very interesting to see how they frame the idea from the outset. It’s also worth noting that the Oregon legislature, led by Portland Democrat Jules Bailey, is already discussing a carbon tax. We’ll be looking forward to seeing the results of this poll, as the local conversation about how to raise new revenue for transportation (and other services) is set to become a major focus in 2014.

If Portland votes in a carbon tax before a sales tax I will just lose my mind completely.

Chris I
Reply to  Scott

They are both regressive taxes, from a socioeconomic standpoint. Why do you favor a sales tax?

Scott
Reply to  Chris I

Favor is an improper word. It’s obvious that Portland, like most cities, needs revenue. Yet we constantly vote down a sales tax for no reason other than we have historically voted down a sales tax.

It would just speak to how easily cajoled Portlanders are as a whole if we voted this one in. It’s still a tax, just named with an earthy buzzword.

From the Willamette Week, we find the city has PLENTY of money laying around, enough to fully fund the BikeShare Program at $4.6 million! See, we don’t need ANOTHER tax:

“But documents obtained by WW show city transportation officials are discussing reversing that plan and using city money to finance as much as $4.6 million of the start-up costs faced by the private vendor, Portland-based Alta Bike Share.”
http://www.wweek.com/portland/article-21018-the_big_bike_bailout.html

What they want is MORE money, pure and simple, so they can keep spending other peoples money like drunken sailors.

I will gladly take a sale tax if my property tax gets lowered, and if a sales tax helps keep SOVs in Clark County from driving over to shop on this side of the Columbia.

Doesn’t it defeat the purpose of a “Carbon Tax” if the gas tax portion goes back into roads? Wouldn’t that encourage more people to drive? Why not do _only_ more climate-beneficial things like support alternative transportation.
Or shoot, do like James Hansen suggests and send a check to low income people most affected by the regressive nature of the tax to offset their increased costs.

Answer: Because that is not just another form of revenue couched in a more Portland digestible title.

Want some organic (carbon based) fruits and vegetables?

“send a check to low income people most affected by the regressive nature of the tax to offset their increased costs.”

I have avoided buying carbon fiber bike frames or parts. I’m worried about catastrophic failure because of a nick or or other minor damage. A tax might not be a bad idea to steer people to a metal (or wood or bamboo) bike.

On a serious note, I worry that another tax in Portland will convince more people to live in one of the suburbs.

Those people are welcome to leave.

On a serious note, I worry that another tax in Portland will convince more people to live in one of the suburbs.

If only we could implement a tax on gasoline that would provide a disincentive for people to live in the suburbs and encourage them to live closer to where the work/eat/play. We could call it a carbon tax!

yes! lets make up another bullsh!t tax to plug some financial holes yet continue to sack the police and fire department payroll. while we are at it, can i have my arts tax money back! thanks

No kidding. I want some real efforts to plug holes before they start taking even more money,

I’m not happy that they’re lumping the gas tax increase with the utility cost increase.

We need to raise the gas tax That’s been known for decades and shouldn’t be put to a vote, it should simply be implemented.

I’m surprised about all the hostility here. A carbon tax is the best possible kind of tax, neutralizing a major negative externality in the economy. If it’s revenue neutral all the better and more likely to pass. BC already has this and it is working well (because it is an obvious effing idea).
http://www.economist.com/blogs/americasview/2013/08/climate-policy-canada?fsrc=scn%2Ftw_ec%2Fthe_land_of_green_and_money

You act like taxes get spent on what we are told they will be spent on when we vote on them.

I’m not sure about “all the hostility here,” it looks like one guy is writing about half the negative comments….

High time for a carbon tax! Clearly, Portland can’t solve climate change on its own, but waiting for a global treaty before doing anything locally has failed us for two decades, so let’s try something new!

The only thing that I’m worried about is that the gas tax increase ask is far too modest. 4.5 cents, seriously? What about 10 cents a gallon? I’d like to see some research on how many people would buy gas outside the city limits in order to avoid a 10-cent/gallon tax.

A carbon tax only makes sense if you include items imported into the region. If you only tax locally sourced items you only drive the manufacture of the item to a place with no taxes on carbon. In reality you actually increase carbon consumption because it takes carbon to transport manufactured items from outside the region to inside.

Portland loves taxes. We pay more and more all the time yet always hear about cuts to our services. Add to that, people get taxed of their homes they’ve long since paid for. I’m not sure what’s so great about Portland.

Well, what were the results of the poll?

If Portland is too timid to do it, maybe Oregon will. http://daily.sightline.org/2014/04/01/will-oregon-cook-up-a-carbon-tax/
A carbon tax is the best tax. The same people who complain about potholes, lack of sidewalks and bike infrastructure should be cheering this one on. Someone has to pay for these things we value. It will either come from taxes on things we would rather not tax, like working class incomes, food etc. or from things we would like to have less of, like the burning fossil fuels that are contributing to global climate change, pollution, sprawl, and the rest.
The best taxes tax the things we want less of (like those above) and thereby give us a double benefit: less global warming, less sprawl, less highway gridlock, less pollution AND the money it takes to fill potholes, build sidewalks, separated bike lanes, etc.
BC’s tax didnt hurt businesses or families. It reduced the amount of polluting, unnecessary driving. Australia, Sweden and other governments have embraced them with no harm and considerable benefit. The argument that businesses will outsource to non carbon taxing jurisdictions hasn’t been proven, and in fact, taxing carbon REDUCES the incentive to transport goods from out of state because the farther they travel, the more tax.
It’s a pretty simple choice, really: do you want more global warming, gridlock, sprawl and pollution, or do you want potholes filled, more bike infrastructure, and more locally generated business and livable cities? A carbon tax gives us less of the former and more of the latter.