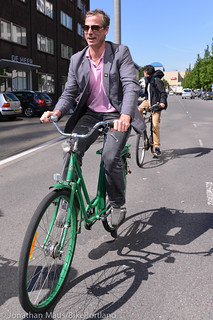 A pair of bike advocates are hosting
a fundraiser for Metro Councilor
Sam Chase, shown here in
Rotterdam, the Netherlands.
(Photo © J. Maus/BikePortland)

Two upcoming events are perfect examples of how bicycling plays an important role in local, regional, and statewide politics.

Tonight at Lucky Lab in northwest Portland (1945 NW Quimby), a pair of bike advocates are hosting a fundraiser for Metro Councilor Sam Chase, who won the race for Rex Burkholder’s old Council seat back in May 2012. Chase was part of a delegation from Portland that recently traveled to the Netherlands on a bicycle study tour sponsored by Bikes Belong/Green Lane Project. This event is being hosted by Gerik Kranksy and Jenn Dice, both of whom joined Chase on that trip (disclaimer: I was there too). While Kransky and Dice are both high-profile professional bike advocates (with the Bicycle Transportation Alliance and Bikes Belong respectively), they are hosting this event as private citizens and not representing their employers.

Councilor Chase has returned from the Netherlands with a new understanding for how valuable bicycling can be for our city and communities and he’s poised to be a great future leader on the issue. Tonight’s event is being billed as an informal chance to meet Chase and share your perspectives on bicycling. “Sam wants to learn more about what changes would make Portland an even better place to ride a bike,” reads the flyer, “Great guy, pro bike, let’s get together to celebrate and support Sam.” 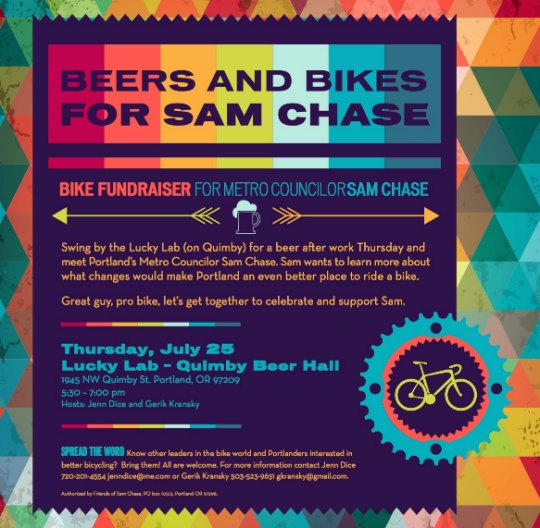 Then on Saturday, August 3rd, three members of the Oregon Legislature are coming together to host their fifth annual “Bike Town Hall.” Representatives Michael Dembrow and Alissa Keny-Guyer will join Senator Jackie Dingfelder for a casual, five-mile ride through the Beaumont-Wilshire, Cully, Roseway, Madison South and Montavilla neighborhoods.

Billed as a “Town hall on two wheels,” the event will tour northeast Portland with several stops including a look at the road diet project on NE Glisan, a chat from the Audubon Society about their Backyard Habitat Certification program, and stops at local elementary schools and recent intersection painting and repair projects.

If you’re like me and do your best thinking and talking while riding a bike (or enjoying an adult beverage in the case of the Sam Chase event), this is a great way to interact with your elected leaders.

Don’t forget to discuss bike parking…especially at the schools you stop at. (They all should have long term covered bike parking for the kids.)