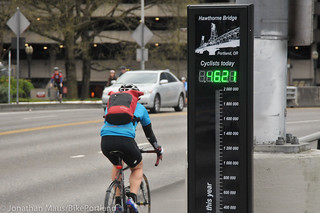 The Portland Bureau of Transportation (PBOT) plans on making some noise about the success of cycling on the Hawthorne Bridge. To toast the upcoming one-year anniversary of the automated bicycle counter and the 1 millionth trip of 2013, PBOT is hosting a special “Breakfast on the Bridges” event this Friday (7/26).

When the counter reached 1 million trips back in April, we wondered why there wasn’t any fanfare. It seemed like a perfect opportunity to tout cycling, but the City didn’t make a peep. Perhaps now that the bureau seems to be finally settling in with two new faces at the helm (Transportation Commissioner Steve Novick and new Director Leah Treat), they are ready to get their cycling groove back.


“That’s one million times people are improving their health… saving money on gas and car repair, and decreasing traffic congestion, all while having fun commuting and getting around.”
— Steve Novick, Commissioner of Transportation

According to a PBOT statement, the city staffers will join volunteers with Shift for the event between 8:00 and 9:00 am on Friday (Novick’s visit to the event last month must have left a good impression). They will hand out “millionth-trip themed doughnuts” and they’ll be offering to take photos of riders next to the counter and a “One Million + Me” sign. And there’s even a social media component: “Anyone who has crossed the bridge by bicycle, skateboard or other non-motorized method is encouraged to share their role in reaching the million-trip milestone on social media with the #MillionBikes hashtag.”

Here’s more about the event from Commissioner Novick:

“One million is a nice round number people can be proud of. That’s one million times people are improving their health, reducing their own and other people’s health insurance costs, saving money on gas and car repair, and decreasing traffic congestion, all while having fun commuting and getting around. Plus, it’s only the middle of the year with lots more pedal strokes ahead of us. Keep going Portlanders.”

Since it was installed on August 8th, the counter — which was donated to the city by Cycle Oregon — has logged over 1.6 million trips

While Friday’s celebration will be fun, PBOT is also telling the local media that the counter is “has a serious purpose, giving transportation planners a useful tool to collect data, track bicycle use and plan transportation improvements and public investments for all modes of transportation… A visual bike counter raises public awareness of [City adopted] goals and highlights the city’s progress in reaching them.”

This is a very positive sign for PBOT. I think they’ve missed a few opportunities lately to tout their successes (NE Multnomah should have a big ribbon-cutting ceremony), so hopefully this is just an example of things to come. Spreading the word to the local media and being proactive with the cycling narrative is essential to moving forward. Nice work PBOT! I hope to see a big crowd on the bridge Friday morning.

See daily updated stats from the Hawthorne Bridge counter here and read our past coverage.

I’m all for the celebrating, but we need to move beyond treating the car as the norm, as the thing we all have but are weaning ourselves from, or just left at home today.
“…saving money on gas and car repair, and decreasing traffic congestion”

Many (roughly 14% of all) households in Multnomah Co. don’t own a car, may never have owned a car. We bike and now we’re being counted. All to the good. But let’s be a little more careful tabulating the ‘miles not driven.’

Even for people who don’t own cars, we can attribute their cycling miles to miles that would otherwise have been covered in a car. Based on the stastic you cite, I would say that cars still are “the norm” and thus offer a commonly understood baseline for comparison with other modes of transportation.

I think I agree with your underlying sentiment. Getting around by bike should not be seen as freakish, but it is still anomalous within our larger society.

“Even for people who don’t own cars, we can attribute their cycling miles to miles that would otherwise have been covered in a car.”

How would that work? Please explain.

You are of course correct that the majority of folks here in town still own and use a car. But since we’re in the process of shifting away from that dependence, reifying this situation, going beyond the statistics and implying that *everyone* has a car just isn’t helpful at this point. The more we say, or hear others repeat, this mantra of ‘miles not driven’ the more we affirm the centrality, the normality, the validity of driving everywhere.

What if instead Novick had said: “One million is a nice round number people can be proud of. That’s one million times people are getting around via one of the best, cheapest, most healthful ways we know. Biking costs the City of Portland (taxpayers) nothing, whereas the public cost of driving averages $250-450/yr above and beyond the fees and taxes people who drive pay to maintain roads and traffic services.* We really can’t afford all the driving we still do. Plus, it’s only the middle of the year with lots more pedal strokes ahead of us. Keep going Portlanders.”

And before you jump on me for the statement that bicycling costs the city of Portland nothing, please remember that all the bike specific infrastructure I can think of is only useful as a defensive measure to keep the ubiquitous cars at arm’s length.

“How would that work? Please explain.”

I’m presuming that if said people did not bike, driving a car is the next most likely way they’d be getting around town. The bike has to be substitute for (or, alternative to) something. Hence the comparison. I think it’s useful because it hints at the benefits of cycling. If you imagine that everybody on a bike were driving a car instead, you can imagine the congestion they’re causing and the pollution they’re spewing. Suddenly the amount of car mileage “saved” by bikes appears to be a really good thing.

“Even your imaginary quote from Steve Novick uses a financial comparison between bikes and cars. :-)”

Yes, but note the difference –
Steve’s actual quote (and the familiar framing it evokes) says ‘thanks for leaving your car at home & saving yourself money.’
My substitution says ‘those of you still driving, we (taxpayers) can no longer afford you; do us all a favor and join those already biking.’

I’ve been watching the “thermometer” gauge approach a million, and also noting that it’s barely halfway through the year … and the display maxes out at two million.

Maybe that would be a good time to think about installing another display for the eastbound direction, which will show much more impressive daily numbers for evening commuters than the existing westbound one does for morning commuters.

I wonder how many trips will be diverted away from the Hawthorne when the PMLR bridge and the Sellwood bridge are completed. That’ll be interesting to see (and valuable data to collect). It’ll probably give us a bit more time before we reach that 2 million mark. Not a bad problem to have 😉

Good point, Kirk. That will probably buy us a few years, and (since I’m coming from the south) my own Hawthorne Bridge trips will be among those that get diverted down to the PMLR bridge once it opens.

Me too. Especially going to the OHSU tram.

Is anyone else somewhat wary of crossing the Hawthorne Bridge when there’s a lot of pedestrians?

just bear down on them at speed ringing your bell madly….

Not really. Once in a while (maybe once a month?) a pedestrian will fail to notice the split sidewalk and I’ll have to slow down or stop, but usually people keep to their lanes and traffic flows smoothly.

Yep. They tend to saunter and not notice when bikes are coming up behind them. Cyclists need to be cautious and take it slow during busy times of day.

That is what bothers me. I choose to ride slow, ring my bell and give a as-friendly-as-possible “on your left”. What I am afraid will happen some day is an inattentive pedestrian will saunter in the wrong direction, resulting in a cyclist going off the very steep curb onto the metal grating.

And don’t even get me started about those Surrey buggies!

When there are a lot of pedestrians on the Hawthorne Bridge the answer is simple. Just slow down!! There are signs that explicitly state bikes must yield to pedestrians.

Yes Todd, at least a couple times a year on BikePortland there’s a long discussion of bike-ped conflicts on that bridge, and whether or not it’s a big problem.

Usually several people chide everyone else for either going too fast or failing to share (“maniacs!” “idiots!” for those who remember the George Carlin bit), and there’s a bitterly contested debate on whether it’s OK for a cyclist to pass another cyclist if a pedestrian happens to be within rock-throwing distance.

I check the bridge counter site every day. You can tell what the weather was like by looking at the numbers. 🙂

Anybody know if there are plans for counters on the PMLR bridge? It is such a big project. It would be nice if counters could be funded as part of it.

“The bike has to be substitute for (or, alternative to) something.”

What are your feet a substitute for (or alternative to)?

Traffic data and an excuse for special donuts. Bike counters…is there anything they can’t do?

And how tall is a stack of a million doughnuts? Would you belive almost 20 miles, if each donut is about an inch and a quarter thick?

A million is a lot, a milestone worth celebrating.

Mayor Hales is by the bike counter right now taking pics of commuters.

So, whats going on with the counter lately? I noticed the other day the display does not appear to be working?