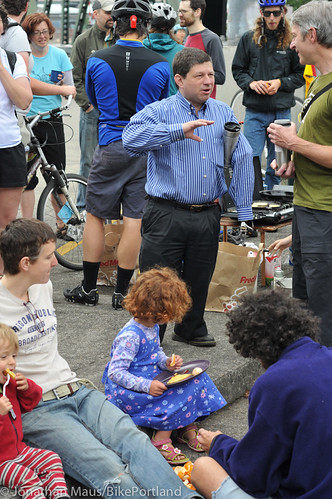 Commissioner Steve Novick (blue shirt) mixed it up with
the crowd on the Hawthorne Bridge this morning.
(Photos © J. Maus/BikePortland)

City of Portland Transportation Commissioner Steve Novick showed once again this morning that he’s a hands-on leader. In the past few months (even before Mayor Hales gave him the PBOT portfolio), Novick has shown up to support walking, biking, and transit.

This morning he and his policy director Katie Shriver walked a few blocks from their City Hall offices to the west end of the Hawthorne Bridge where volunteers with Shift were holding their monthly Breakfast on the Bridges event.

Breakfast on the Bridges is a proud Shift tradition that started years ago as a way to create community and offer a friendly smile and free coffee and munchies for people riding bikes. Fruit, coffee and other foods are donated by local stores and volunteers wake up early to brew fresh coffee to serve to anyone who rides by. The event happens on both the Hawthorne and Steel Bridges. 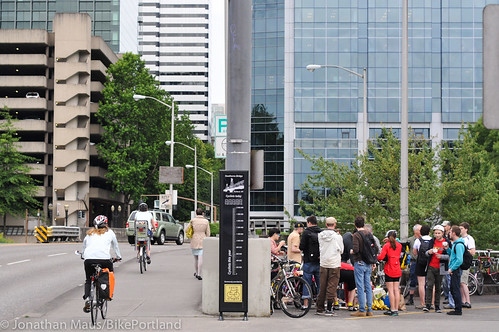 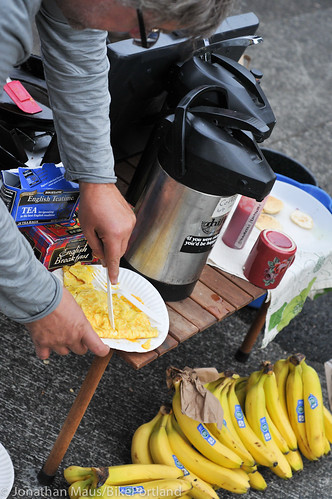 Volunteer Paul Jeffrey sets the table (the bananas
were donated by Whole Foods). 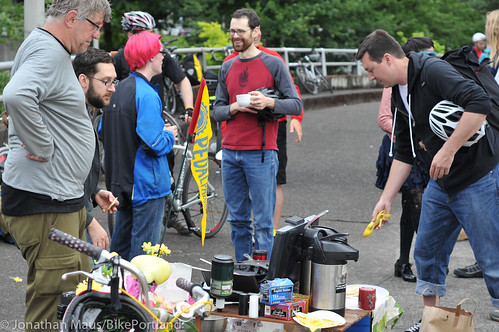 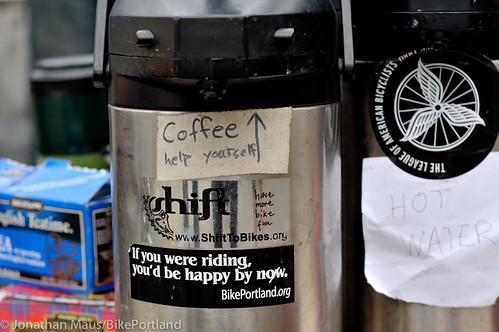 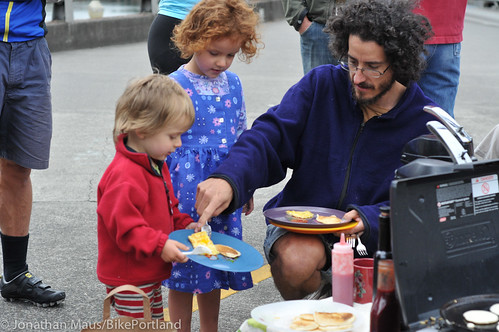 While at the event, Novick chatted with several of the couple dozen people that had stopped on their bike ride into work to enjoy free egg-and-cheese omelets, coffee, tea, and pancakes. 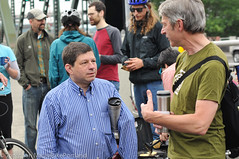 I spoke with him briefly about the recent selection of Leah Treat as Director of PBOT. After I shared my feelings about how her personality and background compared to other candidates for the job, Novick said, “She’s sort of like Tim Duncan.” Duncan is an NBA legend (he played valiantly in the big Game 7 against the Heat last night) who is known just as much for his humble, soft-spoken demeanor as for his basketball skills. I think — and hope — it’s a fitting analogy.

It’s not the first time Novick has shown public support for active transportation. He spoke strongly about the need for more sidewalks in east Portland at a press conference back in April and he participated in a transit game organized by Portland Afoot last month.

Novick’s willingness to get out and talk to people at events like this bodes very well for the future. 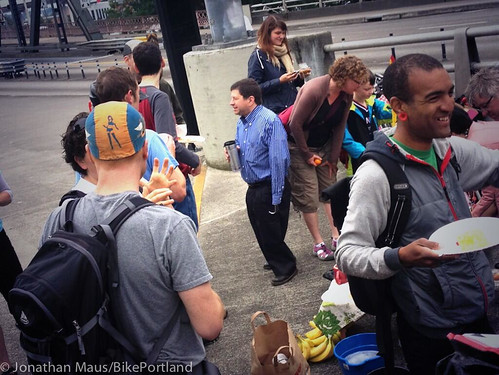 Commissioner Novick also attended the dedication of The Captain’s Walk on Swan Island (part of the Going to the River project): http://www.portlandoregon.gov/transportation/article/450824

I voted for Novick in the Primary last year, but now I’m glad he lost (Sorry Steve) because we got to keep him here in town. DC’s loss is our gain. It’s great to hear a politician say something reasonable and thoughtful rather than pander to the largest voting block (in this case, auto-only users). Also, Breakfast on the Bridges really needs a satellite station on the other side of the bridge. Us Eastbound folks on the Hawthorne enjoy tasty treat too! A big thanks to all those that help out with those and the donors, BTW.

Agreed, glad to have Steve Novick in our local government, where the real work happens.

And BTW, Breakfast on the Bridges is an all-volunteer effort – we’d love to help you set-up an east-side outpost! All it takes is a few early risers to brew, some goodwill cups, and a willingness to ask for donations (or pitch in a few dollars).
http://www.shift2bikes.org/wiki/bikefun:breakfast_on_the_bridges

Damn, I would have stopped if I had seen Novick there!

Actually getting out there and talking to people is still the best way to get things done and communicate your message (both our message to him and his to us).

Hales,Novick,Treat… IMO, this is all coalescing nicely.

Might want to change the wording of that opening bit. . . (“hands on leader”).