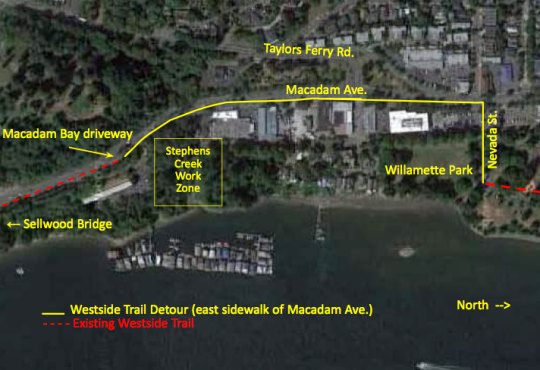 Multnomah County is improving a major bike detour between downtown and the Sellwood Bridge, and wants to thank BikePortland readers for their help making it better.

The detour is needed while county contractors replace a culvert that runs below the trolley tracks. The detour closes the trail between SW Nevada St. and the driveway to Macadam Bay.

Here’s the word from Multnomah County spokesman Mike Pullen, in a comment on this site yesterday:

The trail detour along the east sidewalk of SW Macadam Ave. will be in place until the culvert is replaced and a temporary bridge is installed across Stephens Creek. In 2014 trail users will be able to use the old alignment. The new regional trail between the bridge and SW Miles Street will open by 2016.

The project team will be making the following improvements to the trail detour:

• Remove vegetation growing over the sidewalk between Nevada St. and Macadam Bay (in the next week).
• Add an asphalt patch across the trolley tracks along the detour route between Willamette Park and Nevada St. The consortium of agencies that own the property have agreed in concept to the fix but they need to see the details. This should be completed in July.
• Close bus stop on south side of Miles St. This should be done in July. The nearest bus stop is two blocks north.
• Extend the 25 mph construction zone speed limit from Macadam Bay to Miles St./Taylors Ferry Road. This request is being submitted to ODOT for a decision. As the project limits end here, extending the speed zone north of Taylor’s Ferry is not supportable.

Some users suggested they still prefer using Miles Street. Trail users who prefer Willamette Park and Miles St. to the Nevada St. detour are allowed to use that route, which remains open. To minimize conflicts with the trucks using the haul road entrance at Miles Street, our recommended detour route is Nevada St.

When we published Pullen’s request for advice two weeks ago, several BikePortland readers expressed concern about the detour along a narrow sidewalk. The changes above incorporate a few suggestions and reflect some of those concerns.

Though the detour remains a significant annoyance for north-south traffic near the river, it’s always nice to know the county is listening and looking for ways to make things better.

Correction: A previous version of this story incorrectly referred to the Willamette Greenway as the “Westside Trail,” a different project currently being planned.

Just rode the sidewalk detour tonight. It IS a narrow one (certainly no wider than the Sellwood Bridge’s sidewalk, maybe a bit narrower), plus there are poles in a few inconvenient locations.

Then again, it’s not like I don’t already have to dodge poorly placed poles on narrow sidewalks just to get in and out of Brooklyn on Holgate or Milwaukie.

As far as detours go, this one’s pretty low on the inconvenience scale compared to some of the other stuff going on right now (that don’t seem to be getting reported on here). Frankly, if anything this detour a little easier than the “normal” route since you don’t have to gear down for that short but steep hill at Macadam Bay. If anything, I may use the newly-filled Nevada St crossing in the future even when the trail is reopened. In any event, no big whoop overall.

Try the detour with your trailer or cargo bike and or bring your kids or your mom… or anyone that is not a hard core year round cyclist. I appreciate the county’s efforts to improve the situation.

If you do ride on the sidewalk, please recognize that it is afterall a sidewalk and please slow down for pedestrians and people going in/out of building entries located directly on the sidewalk. This area is miserable for peds and bikes thanks to the highway design of Macadam.

Also be aware that anytime you cross driveways, cars have the right of way if you’re going above “a walking pace”, whatever that is. And since it will be impossible to convince any jury in the state that you weren’t going above a walking pace, best to just assume cars will have the ROW and approach all driveways with caution.

What a crappy re-rout.
They could have ran an asphalt patch straight down the Willamette Shore line (whose tracks are currently removed for bridge construction), but that would of made too much sense.

This improvement is a very scant improvement (it’s still two-way bike/ped traffic on a narrow sidewalk next to a high-speed highway). I went the long way around via the Hawthorne Bridge and the Esplanade on Sunday rather than deal with this detour.