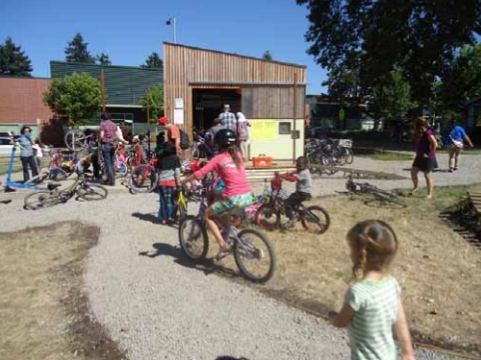 The residents of North Portland’s public, mixed-income housing development New Columbia now have one of the city’s handful of bike skills parks in their backyard.

Enhanced with paths, wood ramps, a berm and a bicycle teeter-totter, the park at the corner of North Wolsey and Trenton got an official opening ceremony Wednesday from its creators at the Community Cycling Center, the nonprofit Northeast Portland bike shop with a mission to make bicycles “a tool for empowerment and a vehicle for change.”

Thousands of Portlanders will get a chance to check out the result two weeks from now: It’s right on the route for North Portland Sunday Parkways on July 28. The $15,500 park, funded by a mix of private and public sources, is now open to the public during daylight hours.

The CCC began working with the New Columbia community in 2009 as part of a Metro-funded project that assessed the barriers to biking among low-income people of color at New Columbia and Hacienda CDC. New Columbia is owned by Home Forward, Portland’s public housing agency.

Continuing discussions with families in New Columbia led the CCC to settle on the need for a bike park that could connect children with riding skills. 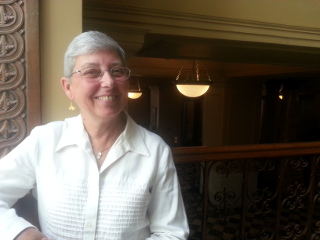 “A skills park is really the answer to the things that need to happen: safety and confidence and learning,” Anne Lee, CCC’s interim executive director, said Thursday. “Healthy activities for the kids that wouldn’t have to be organized, that they would be able to do on their own.”

As for those kids: unlike so many Portland neighborhoods, New Columbia has plenty.

“Fifty percent of the people who come to New Columbia are kids,” Lee said. “And that is just an amazing thing to see.”

The park is built on half of an undeveloped lot owned by Home Forward, which has plans to eventually develop it for commercial use. Lee said she expects that won’t happen for at least five years, probably longer. The other half of the field is expected to become a soccer pitch, developed in partnership with the Portland Timbers.

We covered the opening of last fall of New Columbia’s bike repair shop and the construction of the skills park last month. Here’s a concept plan of the finished park: 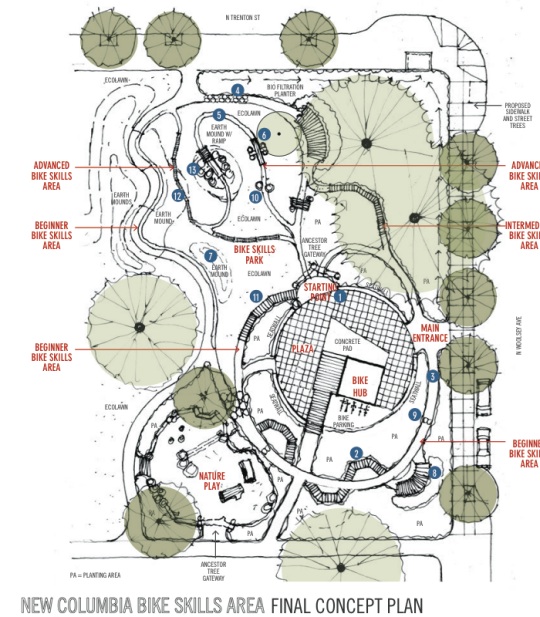 And here are examples of its features: 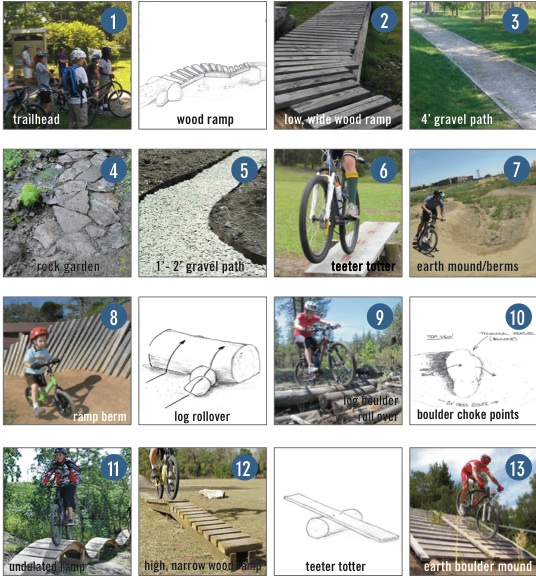 Lee presented her account of the funding and construction of the park at the Portland Bureau of Transportation’s regular “bicycle brown bag” series of speakers. Bicycle Transportation Alliance staffer Aaron Brown, who came to hear Lee’s speech, was full of praise for CCC’s work at New Columbia.

Though all sorts of Portland bike users need the chance to advocate for themselves as well as getting the chance to have fun, Brown said, he thinks projects like the New Columbia skills park will be necessary to make that happen.

“It’ll be fun to see who’s on these pump tracks now that are in 10 years working for the BTA,” Brown said.

“Absolutely,” Lee said. “Or some other new great organization.” 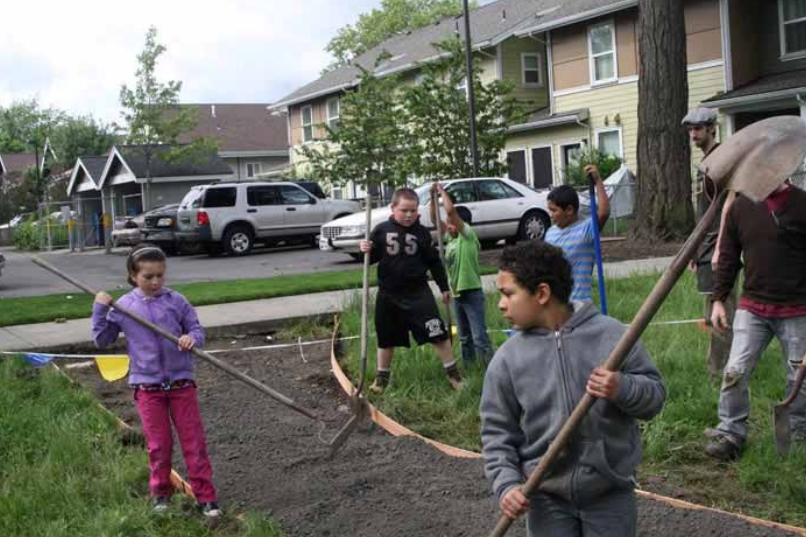 About a dozen young New Columbia residents were loyal
volunteers during the park’s construction.
(Photo: CCC)

Kudos to all the kind people who made this long overdue amenity a reality.
While I have had mild criticisms of the CCC for petty things in the past,I am very impressed by this!
Thank you all.

“The park is built on half of an undeveloped lot owned by Home Forward, which has plans to eventually develop it for commercial use.”

I hope I’m reading this wrong, but does that mean the bike skills park will eventually be destroyed?

You’re not reading it wrong, Erinne. Lee told me the lot is zoned for commercial use, but there are plenty of vacant commercial storefronts in New Columbia as it is. My impression is that the plan to develop this lot was made during a once-in-a-generation real estate boom. That said, there’s a reason they’ve spent relatively little to develop this — it’s unlikely to remain for 20 years.

On the other hand, it’s entirely possible that if this and the adjoining soccer field become popular neighborhood amenities and selling points for New Columbia in general, the plans for this block will change.

It is true that Home Forward is the property owner. We (the Community Cycling Center) do not know the future plans for the lot, other than the soccer field that will be located next to the Bike Skills Park.

Home Forward have been very generous to provide this lot at no cost. They are not charging us or the residents to use the space. It is entirely possible that plans for the lot could change in the future. There are several vacant lots in New Columbia. The one across the street from the park (to the north) is the next one slated for development.

Our PDC grant agreement states that we are providing 3 years of programming at the Bike Skills Park. Luckily, if something were to happen to the lot, the Skills Park and Bike Repair Hub could be moved to another location, however, we are not aware of any plans for that at the moment.

Nice, if you’re training kids to go mountain biking. But that’s a small subset of all cyclists and new riders need to know how to coexits on neighborhood greenways, not traverse a wood ramp. They need to be taught about motorists, road rules and responsibilities, and to watch for road hazards. Someone’s agenda doesn’t appear to match these kid’s reality.

It’s not a “small subset” of kids. Having fun on a bike is what children’s cycling is about. Fun which challenges them and develops their skill, fitness and confidence will stand them in good stead when they’re taught bike road safety. And that’s an “as well”, not an “instead”.

Of course, that presupposes that people are prepared to put in the work to gain a League of American Bicyclists road safety trainer’s qualification. If you’ll allow a Limey to inform you, log on to http://www.bikeleague.org/content/ride-smart-0 for more information

This is not an agenda. This is kids on bikes having fun! Thanks to CCC for engaging the kids in the community on this project!

The two children volunteers in front are my niece and son! They asked everyday to go help build the bike park! Good hard dirty work and they loved it! I’m glad they got to experience this and can now enjoy the fruit of their labor. Great job guys!