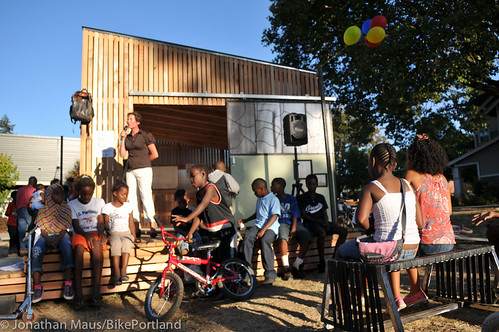 The Community Cycling Center provided the organizational support for the new Bike Hub that officially opened in New Columbia last night; but the building itself — and everything that will emanate from it in years to come — belongs to the community that surrounds it.

The new Bike Hub is a small, humble, wood and corrugated plastic structure on a large empty lot at N. Woolsey and Trenton. For the CCC, it’s a permanent, physical manifestation of their mission — that the bicycle can be “a vehicle for community change.” 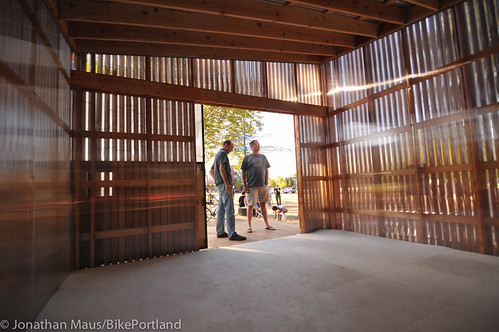 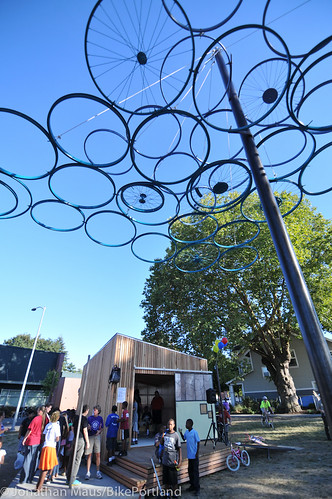 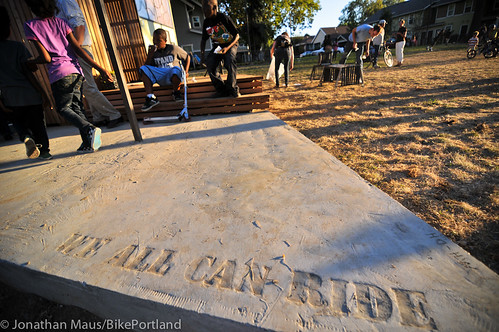 For New Columbia resident Isabella Pena the change means that her daughters Daliah (5) and Camelliah (7), can now start actually riding their bikes. Isabella shared (with the very little English she spoke) that the girls only recently were given bicycles but that they’ve sat idle in their yard. Rust had seized one of them, flat tires doomed the other. “It’s good this is here,” she said, smiling and nodding toward the Hub while waiting in line to get the bikes fixed. 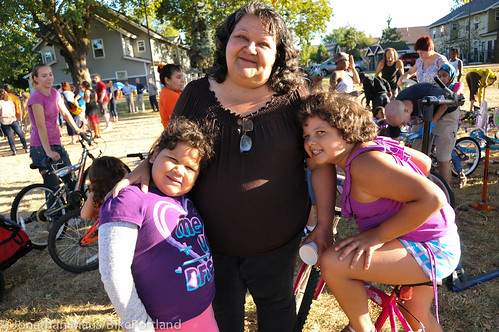 For Charles Robertson, a full-time volunteer community health worker, the change can be distilled down to three words: health, empowerment, and community. 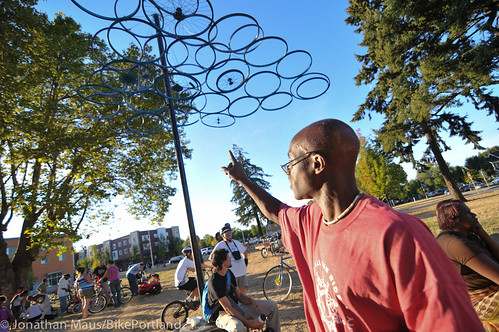 Charles Robertson, pointing to a bike tree sculpture that will be the meeting spot for many upcoming rides.

Robertson and other volunteers have focused efforts on removing what he calls “deterrents to health.” When they wanted to improve food choices at New Columbia, they started Village Gardens. Now, Robertson says, they have turned their attention to bicycling. He’s one of many volunteers who have formed We All Can Ride, a fledgling organization that organizes bike rides and does bike-based youth programs (the club’s volunteers will eventually run the new Bike Hub, after being trained by CCC staff).

“We do so many rides with the kids… We’d want to go out riding sometimes, but the bikes would show up with flats, broken chains, and no way to fix them. Right here we have a place to fix those things. When your body starts to break down, we have the community center over their to go work out and make your body strong. We have Village Market to make your body strong and feel good. Now, if your bike breaks down, you can come over here so we all can ride.” 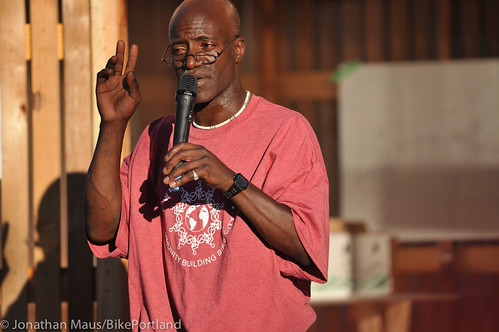 For Robertson, the opening of the Bike Hub is also way to continue a bicycling legacy his father started back in the 1970s when he owned a bike shop in Beaverton called Life Cycles West. “We would ride to church every Sunday… that’s what drew me to bikes.” Now he’s instilling a love of bicycles into young people at New Columbia. He foresees a wide range of bike programs in the Bike Hub’s future; from skill building exercises to repair clinics, regular weekly rides, and even movies in the park.

This puts the community first. This gives the community a chance to say, ‘This is what we want to do and this is how we can make it happen.'”
— Charles Robertson

While Robertson is excited for the Hub and the role he might play in running it; he was quick to point out that it belongs to the entire community. “If you want something to be great, you can’t really own it,” he said, “We want everybody to be empowered and own something.”

When I asked him why having a physical structure for the Bike Hub mattered, versus just meeting in the park under a tree or at another community building, he said:

“This means it’s its own thing. This is where it happens. You don’t have to get in touch with the Boys & Girls club and get someone to do it for you. This puts the community first. This gives the community a chance to say, ‘This is what we want to do and this is how we can make it happen.’ When someone else calls the shots for you; when you can open, when you can close, that’s a deterrent. This removes that deterrent.”

From what I saw yesterday, the Bike Hub will have no trouble staying busy. The grassy areas outside the building teemed with parents and kids eager to get their bikes rolling, and there was a big crop of kids eager to try their hand at the repairs. The crowds and appreciative smiles made it clear: Having a central place to fix, ride, and learn about bikes is indeed what New Columbia residents want. 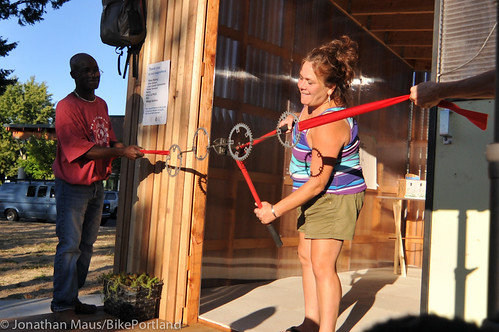 Here are some of the groups that helped the project happen: 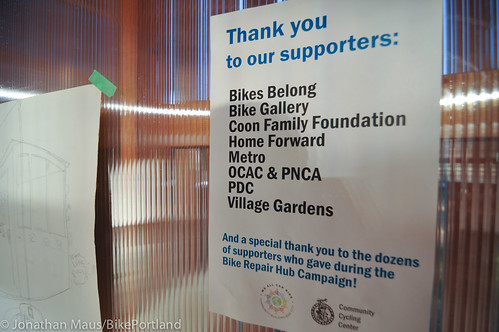 The need is obvious! 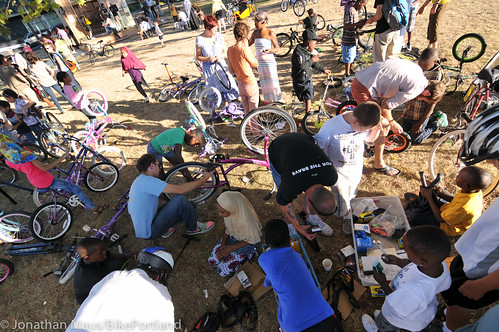 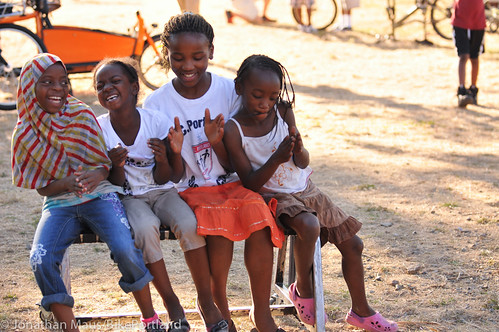 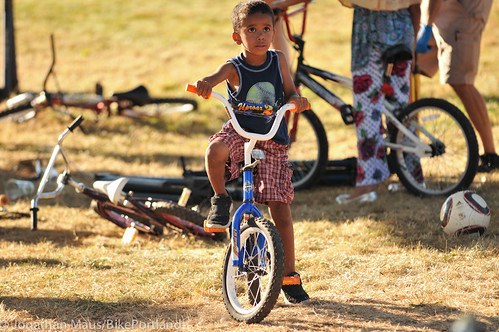 This is right and good in so many ways. Congratulations on community building, advocating for cycling, empowering youth and facilitating fitness.

This is great. If I had some money I’d donate to CCC right the heck now.

I love the clear walls…

I live a few blocks from here and just yesterday I saw several kids out riding around the neighborhood and exploring (with an older guide encouraging them along). They were so full of happiness and excitment…very moving emotionally for me. I’ve volunteered at the CCC several times before, and I’m so proud of they work they do for the Portland community.

To all the folks who made this happen…. Rock On. Seriuosly. Rock On.

We are honored to be part of this project and to be inspired every time we visit New Columbia. It is a very special place, indeed.

Thank you to everyone who helped make this dream become a reality. We look forward to seeing this work continue to develop. We’ll keep you updated on our website and newsletter and appreciate the coverage that Jonathan has provided.

I LOVE this. I’ve met members of the New Columbia community on many occasions and they are really awesome, hard working, inspiring people trying to make a difference. They totally deserve this. And kudos to CCC for all the great work they do. I do a lot of volunteer work, one of my favorites being the annual CCC holiday bike giveaway. There is not much that equals the joy of a kid getting a new bike(as well as a safety class!)

North Portland is replete with a lot of neat places to ride TO.. Smith and Bybee, Kelly Point, the parks, the playgrounds, business districts and more. And while incomplete in some areas, still a network of bike boulevards ..(OK, neighborhood greenways) and much calmer and easier to navigate streets than many parts of Portland.. I’m hoping this adds new faces to the mix on the streets, riding and having bike fun.

such a fun event and an amazing project!