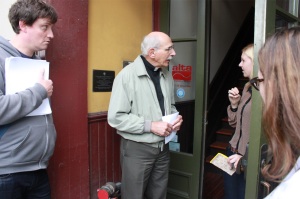 Father Jack Mosbrucker and other members of Jobs
With Justice outside Alta offices yesterday.
(Photos: Jobs With Justice)

Jobs With Justice, a local non-profit that fights for worker’s rights, paid a visit to the southeast Portland offices of Alta Bicycle Share yesterday. Jobs With Justice is joining the call from past and current employees of an Alta-operated bike share system in Washington D.C. who claim the company has underpaid them and hasn’t given them the health benefits they are owed. (Earlier today we shared a statement from Alta about this issue.)

Chris Phillips with Portland Jobs With Justice contacted us today with photos and a statement. He says a group of about a nine people delivered a petition with over 1,500 signatures (that was started online by the D.C. employees) to Alta’s office on SE Grand. The group was led by Father Jack Mosbrucker, a Catholic priest. 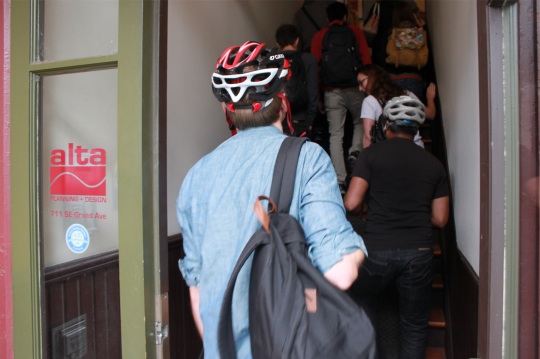 “These workers have received substantially lower wages and health & welfare benefits than they are entitled to under the Alta-DDOT contracts,” Phillips said in a statement.

Phillips’ group also delivered the petition to Washington D.C. headquarters of the U.S. Department of Transportation.

Here’s more from Jobs With Justice:

The company was urged to fulfill its obligations to the workers, and to become the leader in green jobs that they claim to be. We also made clear that any retaliation against workers in response to their activism around this issue would be unacceptable.

The Portland community has serious concerns about a locally owned company that treats their employees in such a way. We will continue to monitor the situation and will respond if the matter isn’t brought to a swift and satisfactory conclusion. With Alta planning to extend bike share to other cities, including Portland, we insist that the growth of the company should not come at the expense of their employees who are struggling to make ends meet.

Alta released a statement yesterday saying they’re cooperating with a federal inquiry into the allegations about unpaid wages and health benefits.

Stay tuned for more coverage of this story.

Glad to see JwJ is keeping the pressure on Alta to do the right thing. It’s really disappointing to see a local business dragging its heels on this issue instead of admitting they were wrong and rectifying the situation.

Theyre probably worried this affects ALL their contracts, such as Boston and Chicago, if a cent of federal money was involved. At least in Boston….$1.5m in fed funds were

I like the approach with Alta on this issue: not overly confrontative, chants, signs, etc. but a more measured response.

At the same time you were firm:
“We also made clear that any retaliation against workers in response to their activism around this issue would be unacceptable.”

I am really glad to see coverage of this issue and even happier that Portland Jobs with Justice is pushing Alta to provide wages and benefits to its workers. It will be good to see the Portland bike community support JwJ in this struggle.

I didn’t sign onto any petitions because I’m still not convinced that Alta has done anything wrong. I have not been able to find a prevailing wage guide for DC that I am sure is accurate. It will be interesting to see what the investigation turns up about the disagreement over prevailing wages. I just hope that however it turns out it doesn’t slow down the expansion of bike shares.

I’ve been sitting this one out because I really don’t have enough information to make a judgment either way. I do find, however, the fact that Jobs with Justice has taken up the employees cause to be significant. I also found the public statement released by Alta and published here on BP the other day to be weak.

“jobs with justice” is a front org for the Service Employees International Union (SEIU). Any marketing which suggests it is not connected to “organizing” is a false message. JwJ is just too clandestine in its tactical maneuvers to reveal its true agenda. And I am a former SEIU organizer.

It seems that legal action is being pursued, right? As well as a DoL investigation… so I think there’s “smoke” here.

Regardless, I think two things are worth considering. These are projects which receive public funding and are in the public right of way. It’s not unreasonable, in my opinion, to expect the company receiving these benefits to consider more than the simple profit bottom line in it’s dealings.

It’s also not unreasonable for ordinary concerned citizens to petition private enterprises. Why should Alta waste money (which a large part seems to come from taxpayers) to play dumb and fight this. Their statements haven’t been particularly forthcoming or full of information either. Sometimes an action, or the spectre of additional actions, can move an organization to make the right decision.

I don’t think it’s entirely a coincidence that Alta released its statement the day after this action.

I wonder if Jobs with Justice offers their employees any benefits.

I believe they do. If you’re really concerned and not just trolling you could easily ask them and report back here.

I checked their annual financial report for 2010. They do.

It would not have surprised me if they had not – like vegans wearing leather.

not sure if you’re chucklehead or not, but the last comment is irrelevant. It wouldn’t even be relevant if they didn’t pay benefits considering the vast differences in available resources, funding sources, and mission of the two organizations.

Yes, Portland Jobs With Justice does, and so does national Jobs With Justice. It’s also has a well-honed structure designed to allow all its members to bring their concerns to the organization and get heard. The monthly steering committee meetings are an exercise in what participatory democracy looks like. Unlike Alta, they don’t stonewall their employees or their members and force them to go to court. You should check it out sometime — first Monday of the month, 5:30 pm, AFSCME Bldg. at NE 60th & E Burnside.

It pains me to see such harsh criticism of Alta which seems to be one of the very few transportation consulting groups advocating for development of bike systems across the world. The mechanics were being paid $16 per hour which is a lot more than many and well within the Dept of Labors listings for such a job. Give Alta a break and more so, congratulations on starting up the greatest bikeshare program the world has ever had.

I share your concern about Alta, but until Alta gives a more detailed explanation my sympathy lies with the workers. Even at 16 an hour, if they were offered benefits and then had the offer rescinded, I would be concerned about that. Even if Alta is the greatest bicycle planning company ever, I wouldn’t want them to think labor laws don’t apply to them. I suppose from a business standpoint one couldn’t blame Alta for testing the waters to see what the can get away with, if that is what is happening. Time will tell.

Soon the AHCA will be in place. Alta may be juggling in order to reconstruct its base to curtail long term pay rates by allowing frustrated employees to leave before it is enacted.
New Seasons cut benefits, and released employees at the top of pay scales, as it prepared to sell.