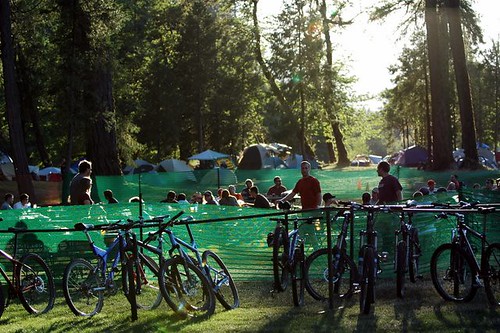 Where timber once ruled the economy, mountain biking is providing new hope. That’s the story for a growing number of rural communities throughout Oregon. The trend isn’t new; but it’s maturing to the point where policymakers can no longer ignore it. On the heels of a major report from Travel Oregon that showed a $400 million annual economic impact from bike-related travel, Linfield College Professor (and bike race promoter) Jeff McNamee is garnering headlines for his research on the economic benefits of mountain biking events in small Oregon towns. 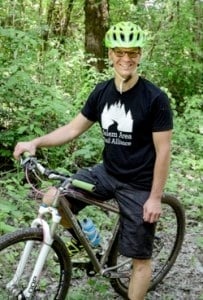 McNamee shared his research at the Oregon Active Transportation Summit last month. McNamee and his two student assistants analyzed the economic impact of three events (two in Bend, one in Oakridge) and surveyed a mountain bike outfitter/touring company. Specifically, they analyzed spending and other impacts from the High Cascades 100 Endurance Race and USA Cycling Marathon Mountain Bike National Championships in Bend and the Mountain Bike Oregon event in Oakridge. They also surveyed customers of Cog Wild, a mountain biking guide company based in Bend.

The three events drew over 1,700 people from over 28 states and several countries (65% were from out of Oregon). Taken together, the three events and the touring company customers led to $2.6 million in direct tourism spending, $3.7 million in sales and 52 local jobs.

While Bend has a well-established reputation as a host of major bicycling events and they’re far from a small and struggling rural economy, this economic impact is especially important in a town like Oakridge (a small town southeast of Eugene with about 3,000 people). McNamee’s research showed that Mountain Bike Oregon alone pumped $1.2 million into the Oakridge economy.

The mountains, forests, and rugged landscapes that surround many of Oregon’s small rural towns are perfect for mountain biking. We shared another example of this in March with our story about a rancher in eastern Oregon who is reinventing his business as a mountain biking destination. And there are many other examples: Oregon Bicycle Racing Association Executive Director Kenji Sugahara recently noted the attendance at the annual Echo Red-to-Red mountain bike race doubles that towns population and the small town of Cascade Locks in the Gorge has developed a mountain bike trail system that now supports a weekly mountain bike race series.

McNamee’s research and the support of bicycle tourism from Travel Oregon couldn’t come at a better time. Many of Oregon’s small timber towns are struggling to find the Next Big Thing for their economies as federal subsidies and budgets to support timber lands dwindles and leaves them with few traditional options. Developing good trails and positioning themselves as a mountain bike destination isn’t a silver bullet; but it can be the spark that keeps these communities alive and opens their communities up to other possibilities.

In addition, because the area creates excellent trail opportunities for events such as this (and the locals welcome us with open arms and hue smiles), we plan a three day trip to Oakridge every Summer to ride. We stay at a local hotel, eat all of our meals in local restaurants and the brewery, hit the local grocery store for snacks and beverages, as well as stop by the local bike shop for information and trail supplies (and grab a hot dog outside the bike shop. too!). We intentionally bring as little as possible from Portland so that our $$ goes to the local economy in Oakridge to show our support for what they do. We are lucky that towns such as these embrace progressive ideas.

I was driving through Fossil Oregon last year and thought, “Zeus’ lightning,” this terrain is PERFECT for mountain biking. It’s mostly private land around there so more challenging for developing a trail network…but, it would be a mecca for mountain biking and a boost to the local economy if developed the right way. Glad to see that things are happening in Heppner, OR.

According to the Sierra Club, mountain biking is okay as long as no one makes any money from it. We’d better hide the results of this study before they sue to prevent mountain biking statewide.

The Sierra Club.. ” Proudly sponsoring Mountain biking, in your community, for hauling recycling to the closest collection center.”

I would imagine that the Sierra Club would be quite okay with the type of mountain biking practiced in Oakridge. Minimal environmental impact, low carbon recreation.

The mounting evidence of the economic benefits of mountain biking is yet more indication of how the city of Portland is missing the boat by failing to provide trail access at places like Forest Park. According to the Travel Oregon study, in 2012 the state of Oregon was the site of 80,000 mountain bike trips (day and overnight) representing approximately $29 million in revenue to local communities. It’s probably safe to say that very few of those dollars were earned in Portland given the extremely limited access to singletrack in or near the city. The Portland metropolitan area is clearly forfeiting a significant opportunity to benefit the local community and economy, not to mention failing to meet public demand for more off-road cycling opportunities.

But it infringes on people’s religious views…

Not quite sure what religion has to do with it, but if you’ve ever ventured outside the confines of Portland and been to any of these small towns you’d see just how much they need those tourism dollars. I was raised in one of them. I know all to well what it’s like to see your town dry up.

If this article attracts “wsbob”, Alex, i suggest we respond in a formal religious fashion, by turning our backs to begin the shunning.

I like you, longgone. Let’s start a cult! Wait, we are in one: we’re mountain bikers.

A cult some view as mouth breathing, careless, reckless, and selfish.
A band of eco-anarchist’s with pea sized cerebellums,.. high on adrenalin and Rockstar energy drink!
A cult so many in number,.. that the mere thought of us sharing space in the woods, brings overwhelming visions of invading hordes impaling owls, and fishing with grenades, on our EVIL machines, ridden to pedaling mantras of Slayer!

A cult SO detached from the original, and wholesome elements of cycling, that, our existence is not even unutterable on the lips those with steadfast moral integrity, and devout adherence to proper stewardship!
A cult they silently pray away.
A cult THEY slander and tarnish, with the vile misdirected passion of a soap box prophet,… engulfed in hallucinogenic annexation!!!!!

oh gosh, I am so sorry..I got a bit carried away there..

“Research: Mountain biking boosts rural Oregon economies”. . . unless the Sierra Club prevents it from happening!
–
Seriously, they spend all this time keeping bikes out, when bikes on trails could be a sustainable (and fun) part of the solution to the rural economics that drive resource extraction! Loggers out of work advocate for cutting trees, while loggers turned into local mtb guides advocate for trails, along with the healthy forests that make those trails possible.
–
With the incentives switched in favor of conservation, it’s a win-win! If only Sierra could see it.

I think it’s great that rural Oregon is benefiting from people’s interest in mountain biking. Many small towns outside of the Willamette Valley and on the coast desperately need new sources of revenue. Unlike cities in the Portland Metro area, the population out there is sparse.

Rural parts of the state have huge amounts of open countryside that haven’t been developed for housing or industry, and that haven’t been targeted for this, which isn’t the situation at all in the Willamette Valley and the Tualitan Valley, where it takes a very serious commitment to acquire new land for parks.

I think in your comments to this story, the petty sniping some of you have indulged in, isn’t going to serve you well towards more mountain biking opportunity in the Portland Metro area being brought about…but that’s your choice.

WSBOB, It may be “sniping” but I’m not so sure it’s “petty.” Sierra Club has done a pretty bad job of manifesting it’s proclaimed support for mountain biking. Far from petty, it’s become a significant and growing organizational weakness that SC seems unwilling or unable to remedy.

I don’t think it is going to matter one way or the other in the end. Your petty sniping sure hasn’t seemed to make a differencel