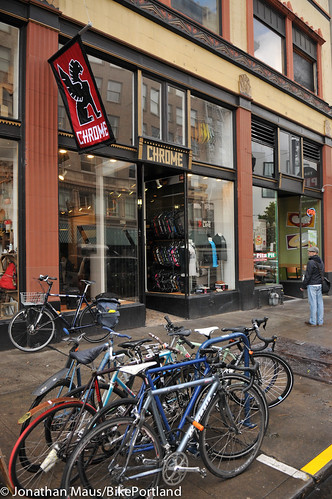 Chrome, a well-known bag and urban bicycling/lifestyle apparel brand, opened a new retail store in downtown Portland yesterday. Staffers from the company’s San Francisco headquarters spent three weeks completely renovating a 1,300 square foot space at 425 SW 10th Avenue (around the corner from the Ace Hotel and up the street from Powell’s). Portland is just the fourth city where Chrome has opened a store, and we’re by far the smallest. Their other stores are in San Francisco (their headquarters), New York City, and Chicago.

Chrome was founded 17 years ago in Boulder, Colorado and moved to San Francisco a few years later. Since then, due in large part to their iconic messenger bags, they’ve extended their product line and now offer apparel, backpacks, and footwear. While their gear is not bike-specific, the brand lives and breathes urban biking and everything is made with the assumption that the customer will move around the city on a bike.

I dropped by their new store yesterday. Even though the doors had only been open for a few hours, the place was already buzzing. Customers milled around both outside and around the store’s TV (which was playing old clips of Eddy Merckx at the Tour de France). And as you might expect from a brand that made its name with bomb-proof quality messenger bags, a lot of the folks hanging out at the store were local bike messengers.

Here are a few shots from inside… 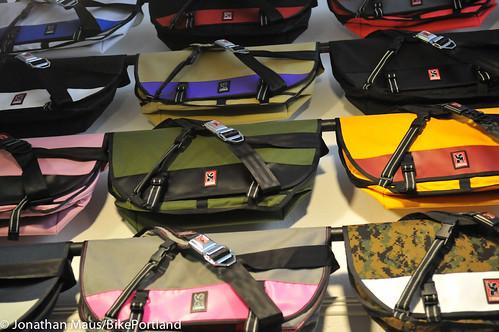 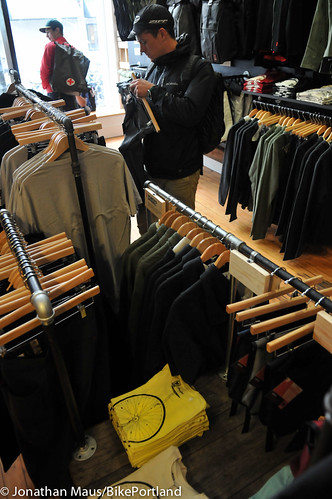 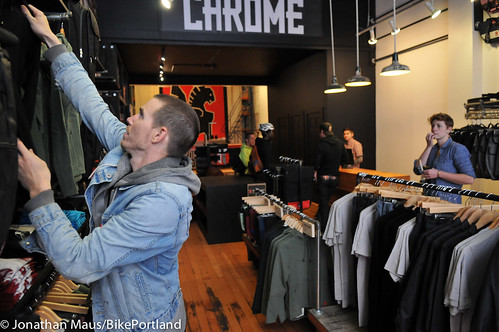 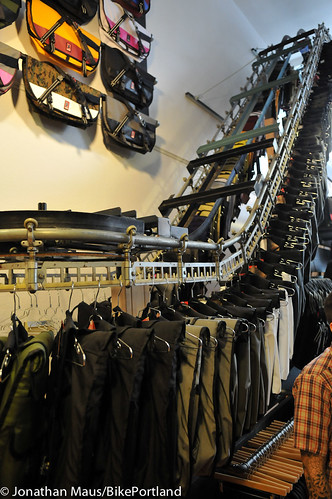 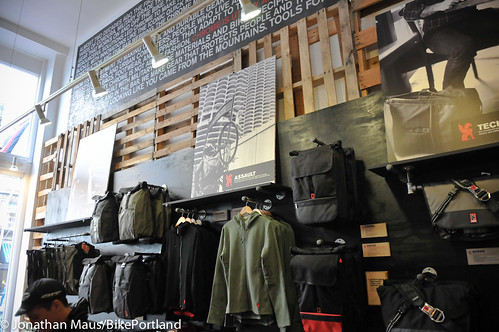 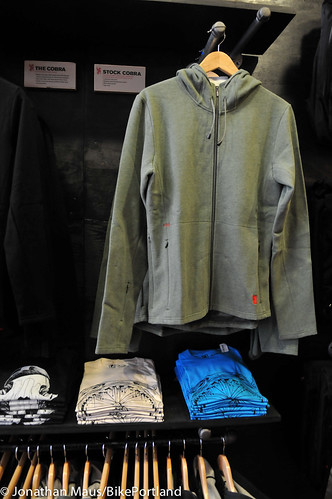 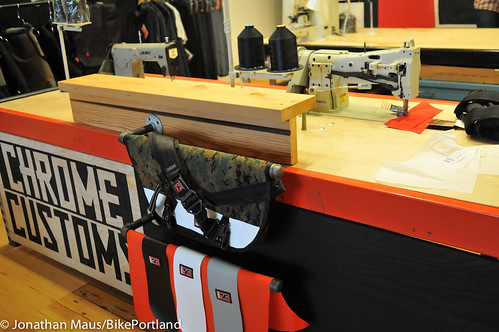 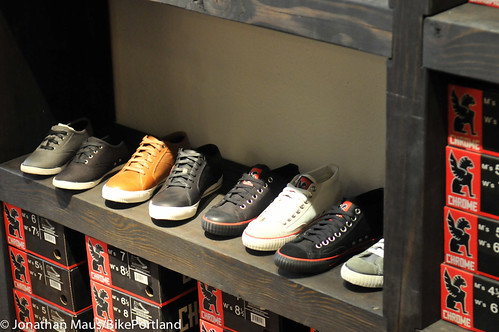 I met one guy near the front door, Barry, who said he was the store’s first customer. He’s been a fan of Chrome for awhile. “I’m glad they came to Portland!” he said, smiling and showing off his new backpack (which he likes because he can carry his laptop and clothes in it and it’s “great for traveling because it fits in the overhead bin.”)

Another person who’s glad Chrome came to Portland is the store’s manager, Amanda Sundvor. Many of you might already know Amanda as the high-fiving and fun-loving mechanic at 21st Avenue Bicycles (where she used to work), as the DJ who keeps local bike parties thumping, or as the force of nature behind Backyard Blam (the folks who brought you the recent Cross Up event, among others). 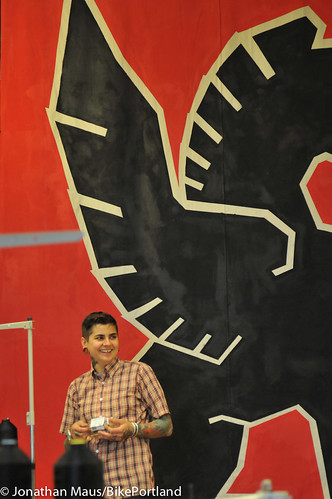 Sundvor loved working at 21st Avenue, but recently suffered a bad hand injury that made working on bikes painful. She had gotten to know the folks at Chrome over the years and when they asked her to manage the new store, she says, “It was very serendipitous.” Now she’s overseeing a crew of six employees and her infectious energy will help keep this place ticking. 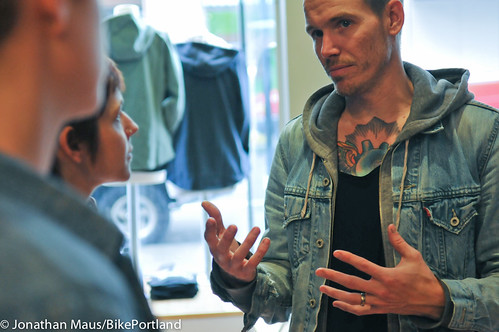 Chrome’s Retail Marketing Manager Paul Wilson, came up from San Francisco to train employees and make the store look just right. Wilson, like many businesses I’ve asked over the years, says his company wanted to be in Portland because of, “The great vibe and community here.” Wilson says he wants Chrome to become a “hub” (they don’t call them stores) for the community. “We’re here in Portland to support our dealers and urban cycling in general… We want people to come here, hang out, and find out what’s going on… It’s a community thing, we want to foster that.” 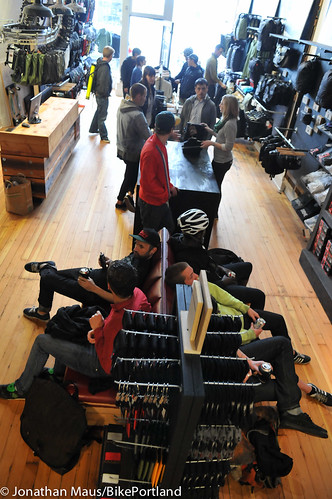 The store itself is gorgeous. The 18-foot ceilings make you want to linger and the hand-made, wooden fixtures are tastefully integrated with Chrome’s urban graphics and dizzying array of colorful products. At the center of the store is a wide wooden table for taking a closer look at the bags. Want to know how it feels all packed up? They’ve got some weights you can toss in the bag to find out.

Near the shoe section is a tastefully-sized TV (not a huge big screen) and some stairs and couches to view it on. 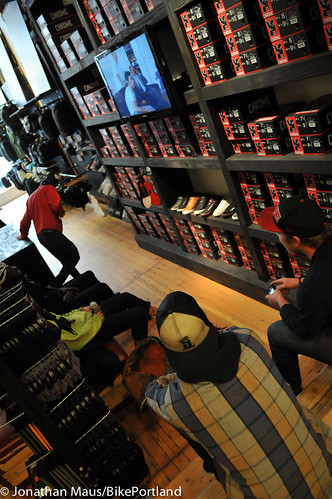 In the rear of the store is what they call the “sewing station.” Sundvor says customers can make an appointment to have certain bag models made custom by the store’s full-time seamstress. Just call ahead, pick your bag, choose a color and other options and they’ll make it right in front of your eyes. Through a partnership with courier company MercuryPDX, they’ll even deliver the bag to your door later the same day (usually) using local bike messengers. 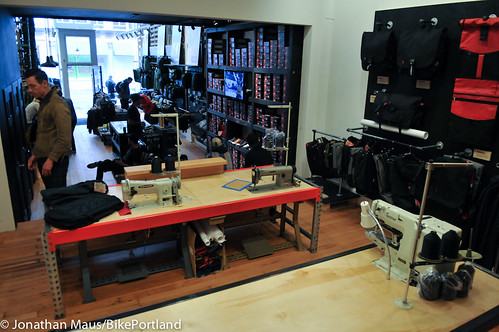 This is definitely a store worth checking out (for locals and visitors alike). There’s a big grand opening planned for First Thursday on June 7th. Amanda says to bring your guns because there’ll be an arm-wrestling contest.

OMG, I was just looking for a Chrome camera bike bag and thinking Where can I find one in Portland? Wish I didn’t have to work today.

What…? They are totally “supporting” their dealers (one of which is less than 6 blocks away). I am sure the local bike shops will not see their Chrome sales drop because of this.
I am sure 21st Ave bikes would welcome a Specialized Concept store 6 blocks away to help “support” them.

Fine for west-siders, but I buy from truly locally owned and/or co-ops. Just the crotchety way I am, dag-nabit.

One of the most snobbish things I’ve ever read on this site. Nice.

And that is really saying something.

yeah i only buy from within a 2 block radius from my home and portage my organic eggs raised next door on my locally made organic bamboo cargo bike too. The west side is so lame and commercial and over! I call B.S.

Locally owned or not “most” businesses support their communities by employing local people and providing them with a living. This helps our local economy. I would hope people don’t forget that.

No kidding, right? It’s not like a Wal-Mart just plopped down…

I am not sure if I have an opinion on any of this, but that made me laugh A.K.. thanks.

You are quite welcome.

Though I’m not in the market for a new bag (I love my Blaq designed bag!) I will still head on over and check this new place out.

I recently got a new bag, to, but Mrs Dibbly is always looking for something new. We’ll try to stop in this weekend.

I really don’t need this kind of temptation. I spend about 90% of my {non-sleeping} life {true story} wearing their spendy-yet-awesome knickers. Necessity.

It is nice to that bicycle related shops have somehow weathered the economic downturn.

Well, I tell you what… I am just tickled pink. Chrome has always been a great sponsor of my events through out the years. It’s a really rad group of people and I am stoked to be part of it. I am going to put as much excitement in it that I did with 21st. That being said expect to see some sweet bike events on the horizon. We’ve got some big plans. Boom boom.

i could be wrong, but isn’t chrome now owned by keen? only makes sense they lay down roots here….

Middle of What Road?

I work downtown and am stoked to have this down there. Whether you buy their products or not, having a shop of this caliber only adds to biking’s presence downtown – where we are slowly taking over. Now we need a bike-centric pub next door to it.

I like their stuff but find it generally overpriced, especially the bags. Think about hiring Black Star bags on Hawthorne for great service and product!