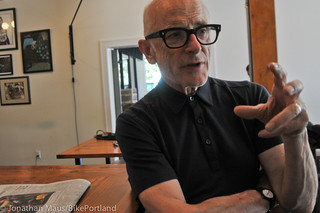 What bike lessons can London learn from American cities? Last Friday I caught up with London architect and leader of the Portland to Portland ride Peter Murray on the eve of his 4,000 mile cross-country bike journey to find out.

If you’ve forgotten (I wrote about them a few weeks ago), Portland to Portland is a 16 person team of architects and designers from London who are riding from Portland, Oregon to Portland Place in London to research and document bicycling practices, projects and culture in the U.S. While in Portland for a few days last week, they ironed out last minute details and logistics and soaked up our cycling scene (along with some wonderfully sunny weather). I caught up with Murray for a chat at Rapha headquarters in northwest Portland (Rapha is one of their sponsors). Murray, 69, is a bit of a legend in London architectural journalism and urban planning circles. He’s an accomplished author, chair of New London Architecture, and a close adviser to Mayor Boris Johnson. Murray’s specialty — and his passion — is how bicycling and walking can improve public space.

When it comes to urban cycling policy, we usually turn to planners and engineers. Why is a group of architects so interested in bicycling?

How do you think this ride will impact your advocacy for bicycling back home in London?

“A lot of argument in London is often about the details. How to build the junctions, engineering-type stuff. One of the really interesting things here is culture. We saw [noted architect and urban design pioneer] Jan Gehl before we left for guidance as to what we should be looking for. He came up with the Four Cs; consistency, continuity, comfort and culture. What one sees here is culture so I think that’s something we can take back. For instance, there are lots simple things like, “active transportation” is not a phrase we use in London. We have people who deal with cycling, people who deal with walking, and people who deal with transit. Their decisions are made in silos. I think it’s very interesting you bring those things together and it creates a very different chemistry — so you don’t have all these factions.

Perhaps we can also learn how you can change culture more quickly… Like Janette Sadik-Khan, who is my heroine of all time really. We have issues in London; there are quite a few good plans but actually getting them to happen is virtually impossible because people have really high ambitions… This needs to be limestone paving for instance… The idea of just putting a few bollards across the street, closing it off, painting and just doing it seems to me something we could really learn. We look to the states as being able to do things, instead of just having good ideas and finding it hard to deliver. The question is: How do you improve the effectiveness of government to make things happen?

Also in the States, you’re much better at communicating things than we are. Politicians are better at explaining things than we are. For instance look at PlaNYC [New York City’s version of the Portland Plan]. It’s written in a language which is available to a much wider sector of the population than ours is. Ours is written for planners and professionals. So I think there maybe 100 ideas we could pick up. Nothing radical, just little things that can change the way we do things.” 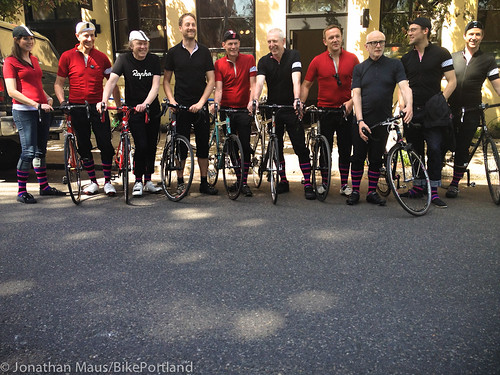 Why not go to the great bike cities in northern Europe? Why the States?

“We’ve been to them. They’ve taken 40 years to get where they are. I don’t want to wait 40 years. It’s the pace of change. I think things are changing here very quickly. Which brings me back to culture. you’ve got to change the culture of places and it will happen.”

What has been your impression of Portland?

“Consideration of all road users. The drivers here are polite, they stop when they’re supposed to stop, they wave you through. Again, that’s a key part of the culture that has to change in London. We have an aggressive traffic culture. Both cyclists and drivers, we have to change that culture to a more considerate cycling model. That’s what I believe in — considerate cycling.”

Right now the team is somewhere in eastern Oregon. They’re posting daily photos and videos from the road. Follow their journey at PortlandtoPortland.org.

David Hembrow has an excellent post about the fallacy of the 40 years argument and how it actually took the Netherlands less than 20 years to achieve real change in cycling infrastructure and culture.

did peter and his group join the pedalpelooza mash up ride last friday?

The 14mph average on Marine Drive with the photog car going the same speed in the travel lane was doing wonders for considerate cycling.