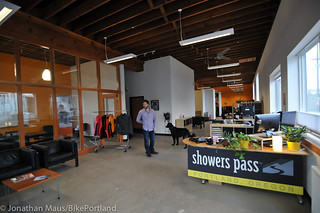 In yet another sign of growth, southeast Portland based Showers Pass has announced a new sales operation in the United Kingdom. Here’s more from a company press release:

“Based in South Shields, Tyne and Wear, the Showers Pass UK headquarters opens for business May 16, 2013 and will introduce a full line of the kinds of performance apparel that has made the brand a must-have stateside.”

Showers Pass CEO Kyle Ranson says the brands strength in the U.S. has created a “loyal and fast growing following” of European customers online. And now he says, “It’s time to really put the rubber to the road in the UK.” Ranson is originally from South Shields and he’s tapped his brother Fraser Ranson as head of UK operations. Kyle will continue to run the U.S. arm of the company.

Showers Pass UK is already working to establish a network of dealers and the full introduction of the brand is set for this fall. The move will mean UK customers will have better access to the full line of Showers Pass products including jackets, pants, gloves, and other accessories.

“We’re thrilled to launch in the UK and it’s going to be an incredible sales year for Showers Pass,” says Fraser Ranson.

Showers Pass is going through a major growth period. The company moved to Portland in 2005 and was originally based in the southwest hills off Scholls Ferry Road. They moved to southeast Portland in 2008 and then doubled their size with another move in 2011. In the past two years, they’ve launched two major new product extensions, a hydration accessory dubbed “VelEau” and their “Crosspoint” glove line. Last year, former CEO Ed Dalton sold his interest in the company to Kyle Ranson.

Showers Pass’s growth is just one of many positive signs of Portland’s burgeoning bicycle industrial complex. One of their new neighbors is Islabikes, a company from the UK that recently established its North American headquarters just a few blocks away. Showers Pass spokeswoman Stephanie Leikas says both companies have benefited from being so close. “It’s been great having Tim [Goodall] from Islabikes as a new neighbor across the street. We’ve been trading business tips for Portland and the UK since they have done the reverse US launch.”

Good stuff, some of which I own. Now if they could just move a couple sewing machines in…..

I was disappointed to find the pair of rain pants I bought from them was made overseas. It didn’t fit quite right but I didn’t feel bad about sending it back.