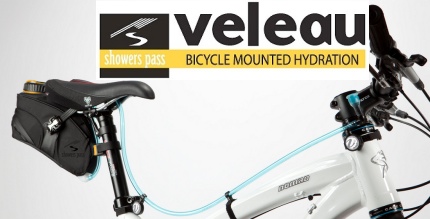 The VelEau is a new direction for Showers Pass. 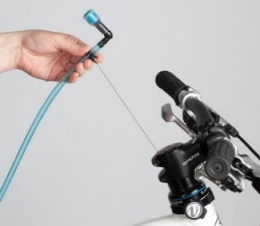 Just pull the hose and drink.

Portland-based Showers Pass — a company known for their jackets and pants that keep water off you while bicycling — has just jumped into the business of putting water into you. The company announced today what they are calling a “breakthrough cycling hyrdation concept” dubbed the “VelEau™ 42 Bicycle Mounted Hydration System.”

Here’s another shot of how it looks on a road bike:

According to Showers Pass president Ed Dalton, the VelEau promises to “change the way cyclists think about drinking fluids.”

The idea behind VelEau is that it’s less cumbersome than a backpack system and more convenient and safer than reaching for a frame-mounted water bottle. Here’s more from a company press release: 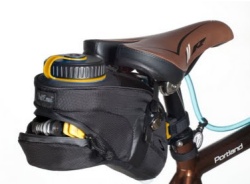 “The unique and innovative VelEau design fits securely under the saddle and employs two patent-pending retractable reels that allow the rider to safely and easily access a hydration tube and bite valve. The VelEau also solves the dangerous issue of reaching for a water bottle while riding, particularly when in a paceline or hammering in a racing peloton. The VelEau’s “Get the Pack Off Your Back” solution alleviates this concern.”

The VelEau’s unique shape allows it to hold 42 ounces of fluids, all in an under-the-saddle bag that also has room for a tool kit, snack, keys, and so on.

One of the two engineers that invented the product for Showers Pass, Frank Bretl, says, “Why carry a hot, sweaty and constricting hydration backpack when you can let the bike carry the water?”

The Showers Pass VelEau™ 42 is set to be on bike store shelves in July 2011 and will retail for $80. More info at VelEau.com.

I knew someone with a homemade system in the Bay Area that was similar to this. Always thought it was a cool idea.

intriguing, but i wonder if a clip at the fore of the bike would be less cumbersome than a retractable leash, Especially with non-aero brake hoods and cables around the stem area.

Is the tube PVC? Plastic hydration products should come with 100% transparency about the material properties (beyond telling one or two things it does not contain).

Hey Ethan, Frank here, the designer of the system. The tube is NSF certified food grade polyurethane, same as most of the hydration packs these days. PVC is so wrong, environmentally and the taste…there’s a lot more info about the product at the site.

I used a backpack mounted hydration system during my last trip down the coast and while I loved it, it became stinky after a couple of sweaty days. This looks to be a better system for long distance trips where showers and laundry stops are few and far between -just hope that Showers Pass comes out with a larger storage tank.

You can rig your own rack moutned system using the “extra bike kit” (Tuble, Valve, Reels) and the hydration bladder of you choosing, and a rack trunk to hold it. It’s a good way to go if you’re running a rack.

This is just screaming for a BSNYC evisceration. Fredly to the max. But to be fair, it makes a lot of sense, too.

I made a simpler version of this. All you need to do is to buy a Camelbak waterbottle and attach a big bite tube. Put the waterbottle in your downtube holder and route the tube around your head tube and clip it to the top tube with a Camelbak clip. Works great.

Never been a Camelbak fan. I’ll still throw on the hydration pack for longer rides > 2 hours, but for everyday riding I prefer to have the weight on the bike rather than my back. So this is a neat idea, but probably more fussy than it’s worth for those of us who don’t do those kinds of rides on a really frequent basis.

And, then there’s this: now we’ve learned that ALL plastics used for water containers have estrogenic properties. Polyethylene and Polypropylene aren’t as bad as the BPA in polycarbonates and food can liners, or as the phthalates in PVC, or whatever the heck is in PET/PETE. But hormone-mimicking chemicals are funny things and still cause problems at very low levels. I’ve switched to lightweight steel bottles.

If they can insulate it and drop the price, I’d use it as a beer tap on fun rides like the bridge pedal! Though the “bottle shock” might derail that plan.

80oz of water up high on the bike, rocking like a pendulum on out-of-the-saddle efforts.

No thank you. I’d rather carry it on my back.

Choices in the market place are a good thing. …To each their own.

Now you are swapping the “danger” of using bottles for the danger of getting laughed out of that racing peloton.

Assuming you can keep up with the peloton while carrying that boat anchor under your saddle. Camelbak RaceBak plus two conventional bottles, if you must take that much fluid on a ride, is a far more elegant solution.

Indeed. I don’t want to bag on the product too hard, Shower’s Pass is a cool local company that makes nice products, but marketing it towards folks who race may be a waste of time. Especially in picture #2… who is going to take their sexy sub-20lb Felt racing bike, and strap over 3 lbs of water weight right under the seat?

Granted, many people carry the same amount of water in standard bidons, but the weight is distributed better, and carried far lower on the bike.

Klean Kanteen (Stainless Steel) – Fill it with Oregon tap water. No plastics. They make a bike cage that fits the 27oz model.

I have a 100oz camelback in a small backpack I use for longer rides. I have no use for another plastic-based hydration system, wherever it is mounted.

The future is now. This product might as well of come out in 1998. Get rid of those plastics and I’d be interested.

This seems like an alright idea for people who are perhaps bicycle touring, but no one I know who races would be caught dead using such a thing. It may not even be allowed on the course, for that matter.

or you could get a hydration bladder and put it in a frame bag from revelate designs and then the weight is between your wheels and you can carry more than 1.5 liters.
maybe this is an awesome idea. People bike in ugly shoes and clippy pedals, so why not?

I’ve ridden with the guy that came up with that. He has a bag with an integrated fender for MTB. Fredly as all get-out, but cool to see he is getting it mass produced!

Also, the “patent pending” retractors are just keycard badge retractors, as seen on the waistline of all of corporate America.

The keycad retractors have magnets, increasing the holding force from 3 ounces to over a pound . . . now how many of corporate America are running those? Answer = ZERO!

My wife’s been doing this for years with a handlebar bag, a retractable key-card retractor, and a cambelback bladder. Patent Pending my ass.

Mounting it on a Santa Cruz Nomad seems an odd choice. All that weight on the back of an aggressive all mountain bike would make it hard to throw the bike around. I could see it flying off after a few airs. I don’t see it being compatible with a dropper post either.It might be an option for a touring trip through Death Valley.

We’ve set up many dozens of VelEau systems on all sorts of MTB’s . . . it was actually designed to solve the suicide-cage dilema on an Ibis Mojo. The Nomad has no cage. They’ve been in test on loads of competitive MTB racer’s bikes for over 2 years, and these people train hard in the off season too. Experience shows that the systems are rugged and can handle plenty of abuse.

Weight distribution really does matter. 3 pounds on your back is only slightly noticeable. 3 pounds on your bike makes the bike feel sluggish. Energy use per mile “might” be the same (I don’t know), but feel is important, too. I’m talking race or light touring bikes here. Doesn’t matter for commuting, but most people don’t have 30-mile bike commutes where they would need water.

Having said that, how much more does one sweat (and need even more water) by having a hydration pack on your back, inhibiting heat loss?

If this thing is made to the same poor standards of quality as my shower’s pass touring jacket, I wouldn’t expect it to hold its water for long. Probably best to use it with fenders so the dribbles from the under-seat bag don’t hit your wheel and splatter up onto you.

Bike Snob puts the “BS” in gear reviews. Maybe funny at some level, but the guy hasn’t ever seen an actual VelEau system, let alone tried one. BS is Lame. The VelEau works.

Here is the VelEau product video we just produced for Showers Pass. Let me know if you find it helpful.

The Veleau is neither sleek or innovative. Not only that but entering the triathlon market will be far more difficult then Showers Pass seems to understand.

Show your product to some of the Triathlon media outlets and see what sort of reaction you get it.

Better yet, post the marketing on the major Triathlon public forums.

I’ve been riding with the proto-type for 9 months. It’s on my favorite road bike. Although I don’t always fill it to the max, I will have it in Death Valley in February. I always use it on endurance rides. It is a solid design and importantly…. I hydrate more when it is on the bike.

Just posted the MTB installation video for the VelEau 42. I think it gives a closer look at the product and how it’s all put together on a bike.