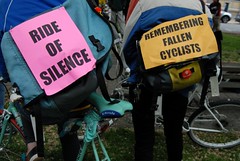 The Portland edition of the Ride of Silence will take place on May 15th. The ride, which is meant to honor people who have been injured or killed while bicycling, marks its 10th anniversary this year. Portland first took part in 2006 and we’ll join hundreds of cities around the globe in a slow, silent procession through the streets.

Organizers of this year’s ride have planned an easy route and are asking everyone who shows up to wear white shirts and black or red armbands to, “add to the visual message of the silent ride.” Everyone is welcome at the event and there’s no admission fee. A few people plan to speak briefly before the ride, which starts at 6:00 pm at Chapman Square in downtown Portland. That location is just yards from SW 3rd and Madison, where Kathryn Rickson was struck and killed while bicycling on May 16, 2012.

Portland small business owner Brian Echerer has organized several Ride of Silence events in past years. He says the event is all about raising awareness. “As a driver and cyclist the Ride of Silence is important because even in ‘Bike Town USA’ awareness still has to be raised on a continual basis. Learning to be aware of your surroundings while driving or riding is just so important because it only takes a moment to change a life, forever,” he shared via email this morning, “It’s my hope that the RoS becomes that message in Portland, where it is still very much needed.”

“Infrastructure is not enough, we need public awareness.”
— Russ Willis

Northeast Portland resident and bike activist Russ Willis echoes Echerer’s perspective. “Yes, we have a seven or eight percent mode share, we have a city transportation bureau that ‘gets it,’ and we have bike lanes and sharrows and green boxes all over the place, but people are still getting injured and killed,” he says, “infrastructure is not enough, we need public awareness.”

As to what kind of public awareness, Willis adds it’s all about sharing the road. “Which is not to say there is not baggage on both sides.” While he acknowledges people have responsibilities and must abide by the same rules whether they’re biking or driving, Willis says, “The ride is about educating people who are operating much larger and more dangerous machines that they need to pay attention.” 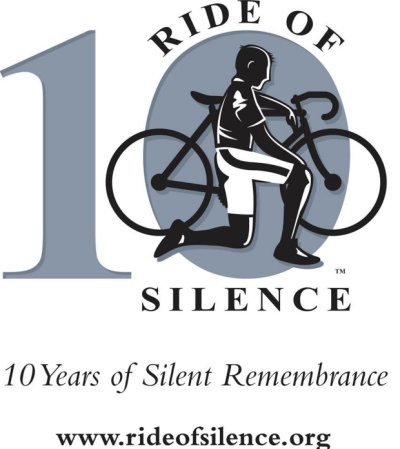 Portland is one of the three Oregon cities that will participate on the 15th. Rides are also planned in Corvallis and Salem. Learn more about the ride via Facebook or at Ride of Silence.org.

Browse past coverage of the Portland Ride of Silence in our archives.

real quick question, what that 6am or 6pm?

so true:
“Infrastructure is not enough, we need public awareness.”
— Russ Willis

Friendly suggestion to organizers. Please address “corking” before the ride (what it is/whether or not you’ll be using it). Last year I had a pretty bad time when I was left standing in the middle of MLK while trying to help keep the large ride together. But I won’t be coming this year. I find I witness too much riding that is dangerous at these rides–which seems opposite of the point.

are
Reply to  Erinne

short answer, erinne, is that we will be asking people at the start of the ride not to cork, to stop at intersections, and to regroup on the far side. the entire route will be downtown, so this should not be difficult.

mh
Reply to  are

Thank you, Russ. I was going to send you a plea for the kind of legal, civilized progression we had prior to last year. The last thing we want to do is to be too self-important to obey traffic laws.

Since we are going with “no corking” i would recommend there be a small cue sheet for the route passed around. last year, the ride became pretty disjointed, and a few folks near the end of the ride took wrong turns and such.

and cue sheets there shall be

Are all of these guys going to obey all of the traffic laws and ride safe on this ride? I’ll bet they will be rolling right on through those stop signs. In silence.

are
Reply to  jim

there may be some girls, too. or maybe your use of “guys” includes both sexes. anyway, jim, we did the ride exactly as i have described it in 2009, no corking, regrouping after lights. in some other years they have had police escorts and traffic control, but i think this defeats one of the purposes of the ride, which is to show cyclists functioning in traffic as traffic. not sure where your negativity comes from, exactly, jim. maybe you would like to join the ride and lead by example.

jim
Reply to  are

Glad to hear you are planning a safe ride. Perhaps this will be a good example for those that participate in rides where they aren’t so safe.

An easy way to make an armband is to cut off the appropriate length of an old sock.