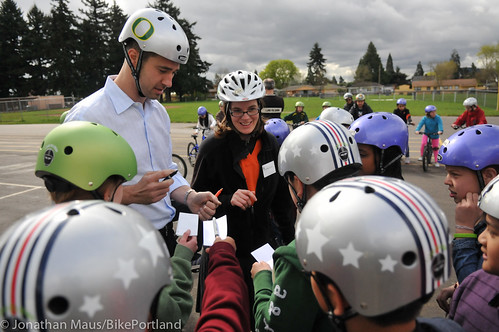 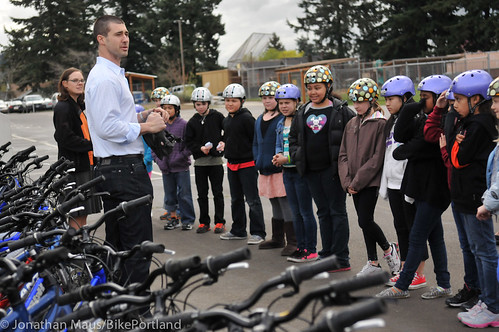 Former University of Oregon and NFL quarterback Joey Harrington has been hit in traffic while wearing a helmet many times. But it wasn’t until it happened to him off the field that it changed his life.

On July 31st of 2011, Harrington was hit from behind by a man driving an SUV. He was riding on SE Foster Road, returning to his downtown condo after riding a loop out on the Springwater Corridor. The collision left Harrington with serious injuries and he spent three days in the Intensive Care Unit. Today at Roseway Heights School he showed the helmet he was wearing that night to a few dozen fifth graders.

“Sometimes things to sideways, sometimes accidents happen,” he said, “Had it not been for this helmet right here [which he pointed out still has blood stains on it from his head], I honestly don’t know if I would be here right now. This saved my life.” 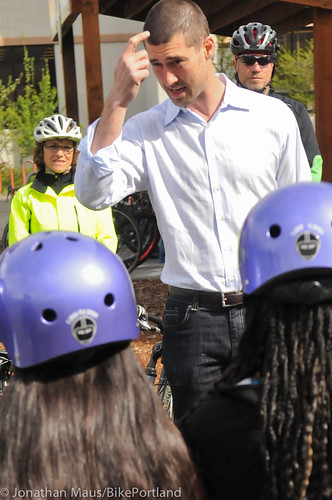 After his collision, Harrington vowed to work on bike safety issues through his foundation, which focuses on children’s education, safety, and health care. He shared with me this morning that he believes bike safety education, “Essentially covers all three of those things: It’s an education program, it’s child safety, and it’s keeping them out of the health care system.”

Harrington, who currently lives in northeast Portland and works as a broadcaster for FOX Sports in Los Angeles on the weekends, said when he got hit, he realized that within the same month there were two other fatal bicycle collisions. “People died. But mine was the one that was on SportsCenter and on the evening news. You rarely heard about the other accidents. I realized this was an opportunity to bring these issues to light.” While he says the city has a responsibility to create bike-friendly streets, Harrington feels people need to take responsibility for their own safety as well. 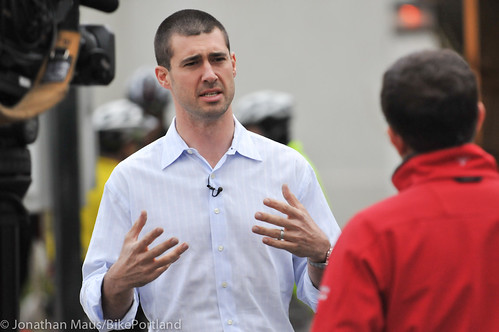 Harrington on camera with KATU News.

Harrington sees early education of children about how to operate a bicycle safely in traffic is key. “These kids will not only know how to stay safe now, they’ll grow up to be drivers that are conscious of bike riders.”

At the event this morning, Harrington’s words and his presence, definitely made an impact. The kids flocked to him to get his autograph and they looked up his towering figure (adorned with a brand new Nutcase UO Ducks helmet) with broad smiles and rapt attention. When Harrington shared the news that the Nutcase helmets they had on were theirs to keep, pandemonium nearly broke out: A few of the kids danced and several gasped with excitement about their new helmets. “Yes! We get to keep ’em!”

Before hopping on their bikes, the students were given one final refresher on the right-of-way rules. They shouted in unison: “First to stop, first to go! Furthest to the right goes first! Turning left goes last! And the zero rule (because it trumps all the other rules): Don’t get hit no matter what!”

Whether as a quarterback dodging massive tacklers or as a bike rider out for a spin, that’s a rule Harrington will never forget. 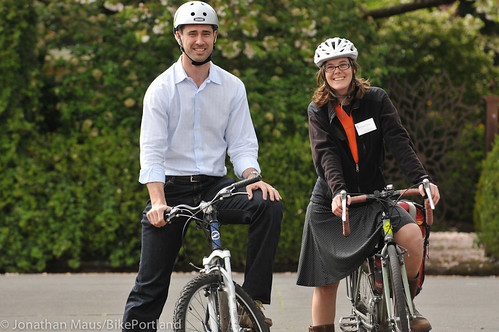 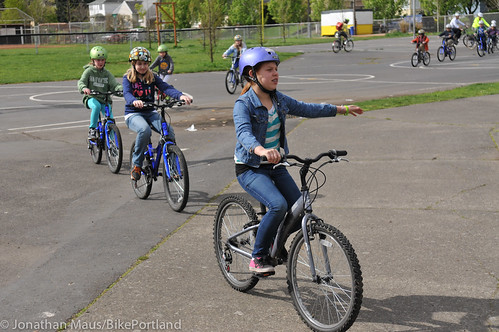 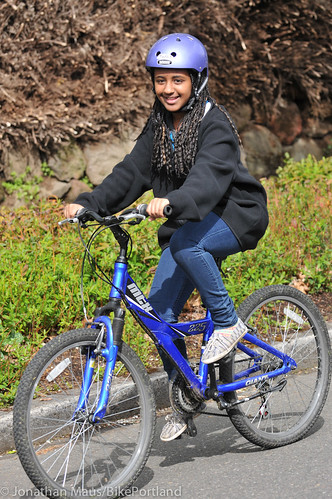 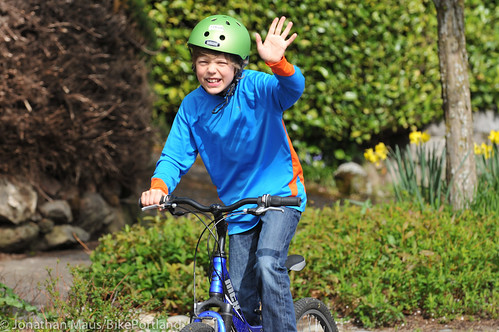 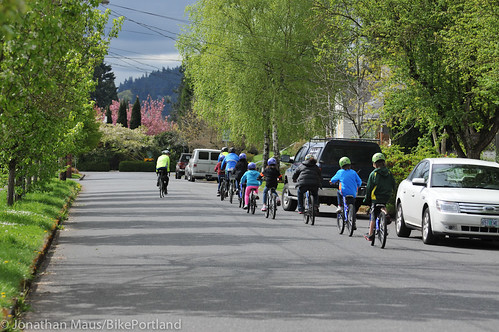 Stories on children and the benefit’s of cycling, often seem to draw the least comments. This is the saddest thing for me. In these pictures are the faces of potential lifelong cycling advocates. I see children of many colors, sharing and growing around an activity that can be as unique to them, as they are to the world. They are telling the world that the bicycle is for everyone, and not just a few. If we stay out of their way, the world just may listen.

Can you provide a link to or info about Joey’s foundation?

Nice story, thanks for sharing 🙂

Focusing on helmet use in collisions with motor vehicles is the biggest disappointment in this story. Children and all others need to know helmets are not made to withstand such impacts and far more important is prevent the collisions from happening in the first place. “Saved my life”, indeed. Plenty of cyclists survive crashes without helmets. Such testimonials only distract advocates from perusing more important issues and place a false sense of security in those choosing helmets because they think they will do something they can’t.

“people need to take responsibility for” not being hit by cars.

Frankly that’s just appalling. What people need to take responsibility for is controlling their cars and not running people over.