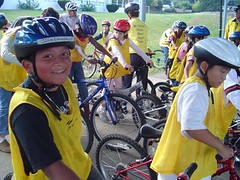 The Bicycle Transportation Alliance (BTA) will mark a big milestone this week: the 50,000th student to graduate from their bike safety education program since they began teaching in Portland schools in 1998. To celebrate the occasion, they’ve teamed up with the Harrington Family Foundation for an event and ceremonial bike ride with fifth graders on Thursday in northeast Portland.

The Harrington Family Foundation was started by former NFL player and University of Oregon quarterback Joey Harrington. Back in August 2011, a person struck Harrington with their car while he was biking on SE Foster Road. That collision thrust Harrington and his foundation into bike safety activism and they created the Bridges to Breakers charity ride as a result. The stated mission of that ride is to, “create safer streets for bicyclists through education with the aim of reducing and preventing injuries to children.”

Thursday’s event will take place at Roseway Heights Elementary School. The school’s fifth grad class will join Harrington for a community bike ride and students will be given free helmets from Portland-based company Nutcase Helmets. The ride will mark graduation for the students for their completion of the BTA’s 10-hour Bike Safety Education curriculum.

Roseway Heights is just one of 40 Portland schools that receives the Bike Safety Education program. The classes are funded through City of Portland traffic fine revenue as well as Oregon Department of Transportation grants. The BTA teaches the classes under a contract with the PBOT’s Safe Routes to School program.

The classes include use of a fleet of bikes provided by the BTA and cover topics like proper bike and helmet fitting, signaling, stopping, bike handling skills, rules of the road, and more. After the two week program, students join BTA staff for a ride through neighborhood streets to demonstrate their skills.

BTA Education Programs Manager LeeAnne Fergason says they’ve been teaching this program so long that some of their first students are now adults and two of them currently work as Bike Safety Education instructors themselves. “They are carrying forward that formative experience in how they choose to get around and in their awareness of bicyclists on the roadway,” says Fergason.

Learn more about the BTA’s student bike education program on their website.

Always great to see kids on bikes. This program should be part of driver training too.

While it’s not part of drivers training – yet – the BTA is kicking off two adult education programs in partnership with PSU and PCC. Jonathan did a great write up on them recently:
http://bikeportland.org/2013/03/19/bta-now-offers-bike-education-courses-at-two-local-colleges-84388

Yay for the neighborhood kids! I saw them training as I pass Roseway Heights School every morning this past week. And I see more and more kids and parents riding to Roseway Heights every school year.

So let’s celebrate – with food! Mark your calendar for Thursday, May 23rd – there will be a PDX Bike Month breakfast on NE Sacramento at 67th from 7 to 9 am. This is just one of many breakfasts that we’re hosting in every quadrant of Portland. Click my name or go to http://www.PDXBikeMonth.com to see the full list, and find a breakfast or ride or class or event near you!

Awesome ! Way to go Joey and the Harrington Foundation. My step kids ride to school everyday (well sometimes walk or scoot) in north portland. And I feel bad they are usually the only ones ! This is unfortunate because the other children are getting dropped off via automobiles which makes the school zone a hazard zone for those who ride or walk.