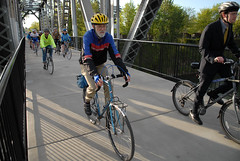 The Oregon Department of Transportation (ODOT) announced today that they’ve officially launched an effort to develop a new Oregon Bicycle and Pedestrian Mode Plan. The plan will be an update to the state’s “policy framework for bicycle and pedestrian modes” which was last updated in 1995.

While the plan’s design guide was updated in 2011, the policy portion of the plan is outdated. The current Bicycle and Pedestrian Plan is also only a staff-level document; meaning it doesn’t have the power and influence of officially adopted plans like the Highway Plan or the Freight Plan. That is going to change with this update, says ODOT’s Pedestrian and Bicycle Program Manager Sheila Lyons. Once completed, the new plan will be adopted by the Oregon Transportation Commission and will be “equal in stature” to the highway and freight plans.

With a combination of being officially adopted by the OTC, institutional respect from ODOT, and advocacy groups using it as leverage, this new plan could help usher in a new era of policy direction for the state. The plan won’t identify specific projects, but it will be used to influence funding decisions and project designs.

On the plan’s website (updated today), ODOT says a successful Bicycle and Pedestrian Mode Plan should help, “refine the vision for the future of biking and walking in Oregon,” “promote connectivity, mobility, safety, accessibility, and other statewide goals,” and “provide guidance to promote a consistent approach for balancing the objectives of bicycle and pedestrian with other modes, and promote the selection of investments to meet those objectives.”

To help steer the update, ODOT plans to form a Policy Advisory Committee (PAC). Stay tuned for more your opportunities to weigh in as the plan update effort gets underway. Check out the official project website for more information.

There is still nowhere NEAR enough emphasis on PROTECTED bicycle infrastructure–trails (in which we now lag the rest of the country literally by orders of magnitude), concrete-and-landscape-separated cycle tracks (like the ones on Hornby, Dunsmuir and Carrall St in MUCH more densely populated Vancouver–so it should be MUCH easier to do here!), etc.

Remember–WE that comment are generally the 2% who feel safe riding anywhere that it’s legal. We need bicycle infrastructure that will attract the VAST majority of the population that has probably never been to this site, the world’s greatest bike blog–and that would never, ever ride on a busy street on which they’re “protected” by an inch of paint.

Speaking of easy (and incredibly cheap) solutions, check out this hilariously creative and polite middle-of-the-night addition to a bike lane in Seattle. The email exchange between the “Reasonably Polite Seattleites” and SDOT is alone worth checking it out!! 🙂 http://www.seattlebikeblog.com/2013/04/04/guerrilla-road-safety-group-politely-installs-illegal-bike-lane-protectors-on-cherry-street/