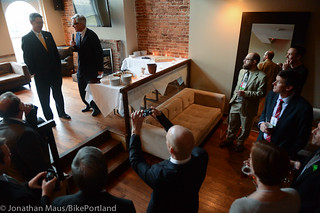 For the bicycling agenda to have any chance of competing on Capitol Hill, it will take cash donations to members of Congress and direct lobbying. That might be an inconvenient truth to idealistic advocates; but insiders say it’s simply how the game is played.

On Tuesday night, 10 members of Congress showed up to a wine bar just blocks from the Capitol Building where Bikes Belong hosted their annual BikesPAC fundraiser and lobbying shindig. The event was an opportunity to, “cultivate long-term relationships,” said Bikes Belong President and emcee for the night, Tim Blumenthal.


“Cycling was a punching bag a few years ago; it was a political freebie to beat up on cycling. Not any more. We’re coming of age.”
— Congressman Earl Blumenauer

Blumenthal said his group raised about $70,000 last year and he expects to bump that up to $90,000 this year. With that money, BikesPAC writes checks to the re-election campaigns of members of Congress who are supportive of bicycling. Finance rules limit such donations to $5,000 per candidate per election, so even though BikesPAC is tiny in financial terms, it gives them an opportunity to exert influence.

If the bike industry stepped up and got more involved and organized, BikesPAC could yield even greater influence. That’s a fact lamented by Blumenthal. “I think there’s a somewhat understandable hesitation on the part of bike industry leaders to make contributions to members of Congress; but what they need to know is it’s the only way we’ll get face-to-face audiences with the key members.” With limited financial reach, Blumenthal explained that “We are in no position to buy anybody’s vote.” Instead, these donations to carefully chosen Senators and House Representatives simply offer an opportunity to make the case for bicycling.

“I think there’s a somewhat understandable hesitation on the part of bike industry leaders to make contributions to members of Congress.”
— Tim Blumenthal, Bikes Belong

Blumenthal puts the power of BikesPAC in perspective by explaining that there are about 2,000 full-time transportation lobbyists that work every day on Capitol Hill. But the bike lobby, he said, “On a good day we’re four people.” Looked at another way, Blumenthal pointed out that the National Automobile Dealers Association raises $5 million dollars a year by getting every car dealer in the country to pony up. As a result, “They have a lot more power and they have a lot more influence.”

But don’t despair, we have a secret weapon: “What we have is a great cause and a great story,” said Blumenthal. “People come here because it’s non-controversial, positive thing. And they like it.”

As the night wore on, Blumenthal’s theory proved true. 10 members of Congress showed up: five Republicans and five Democrats. Just about every one of them shared a personal story about bicycling and they all thanked the assembled crowd of uber-advocates and bike industry luminaries (including SRAM co-founder Stan Day, Trek Bicycles President John Burke, and others) for their work in making America more bike-friendly. 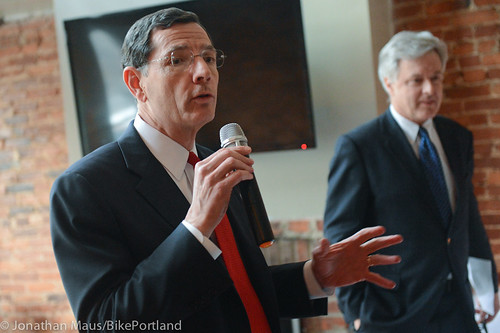 Senator John Barrasso (R-Wyoming) said he and his staff “Want to be helpful” to bicycling, “Because we all know how important this is for our nation.” He spoke a lot about health (as did many others) and thanked the crowd for their, “work to get America moving.” 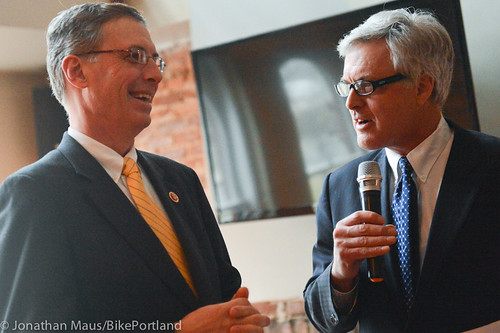 House Representative Tom Rice (R-South Carolina) shared a story about the terrible weekend congestion that plagues his hometown of Myrtle Beach and how some of it could be alleviated if more people were on bicycles. A self-described fiscally conservative tax lawyer by trade, Rep. Rice shared his perspective that funding bicycle projects makes fiscal sense: “There’s a difference between spending and investment… And we’re not going to have the same level of investment we’ve had in the past, so we have to choose how we spend it wisely. Bicycling is a great form of alternative transportation.” 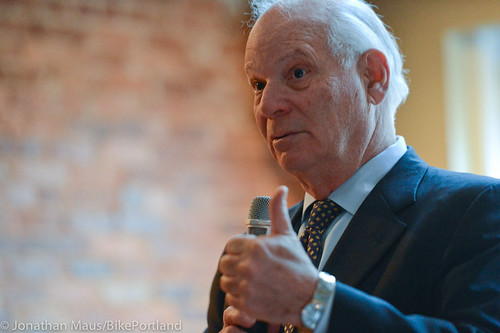 Just before Senator Ben Cardin (D-Maryland) spoke, I overheard one bike advocate whisper, “This guy saved our ass.” He was referring the amendment Cardin successfully passed in the recent transportation bill (MAP-21) that put more federal transportation funds into the hands of local cities and counties — instead of letting the state DOTs hold the pursestrings.

“We were successful on MAP-21,” Cardin said, “Because of people in the room. There were powerful interests against what we were trying to do. They wanted no federal funds to go toward projects such as bike paths.” Now the big challenge, Cardin warned, is to make sure local governments, “Don’t succumb to the pressure of the road builders.” 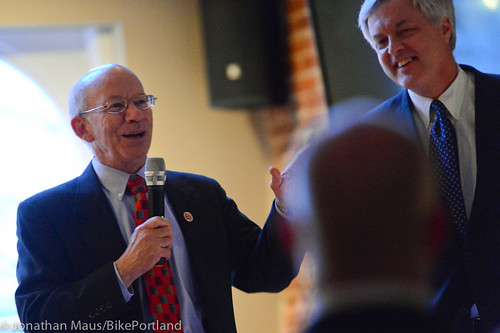 Oregon’s House Rep. Peter DeFazio also swung by the event. He chatted up all the Oregon advocates in the room and gave his thanks for BikesPAC support. 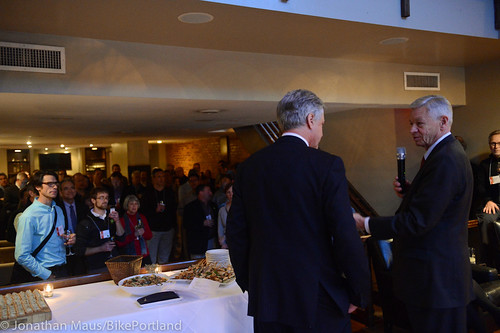 As Chairman of the Subcommittee on Highways and Transportation in the House Transportation & Infrastructure Committee, Representative Tom Petri (R-Wisconsin) urged bike advocates to bring local success stories to their Congressional representatives. “This is really a grassroots effort; it’s not really a Washington effort. The only thing I can say is to think about how to connect what’s going on in the country and in people’s lives with what’s happening here.” 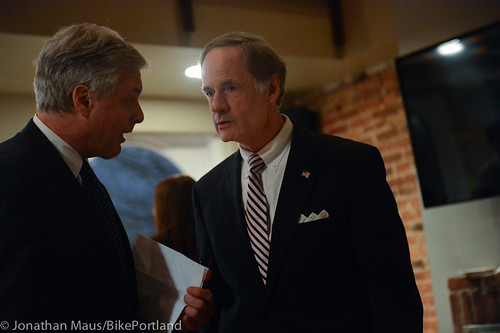 Senator Tom Carper (R-Delaware) shared that when he was a flight officer with the U.S. Navy he’d throw his Schwinn Varsity in the back of the plan so he could ride wherever they touched down. Carper also mentioned bicycling health benefits: “We need to exercise more and make it possible for people to have fun while they exercise.” 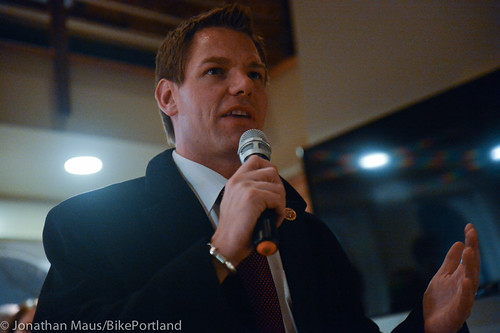 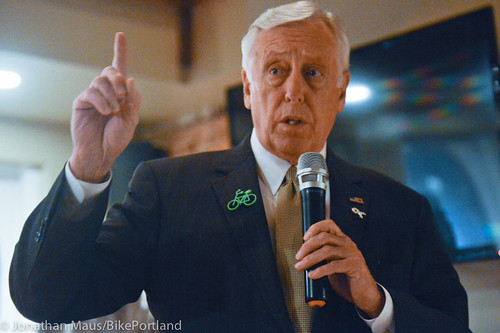 Venerable House Rep. Steny Hoyer (D-Maryland) said Congress is “being penny-wise and pound-foolish” when it comes to infrastructure spending. Hoyer’s personal bike story was that his father was born in cycle-friendly Denmark. “I’m Danish… Where they cycle because it’s good for their health and good for the health of their roads. I came from stock that thinks biking is a part of life. It’s just how they do things.” 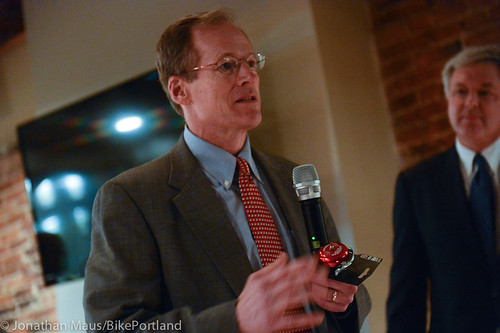 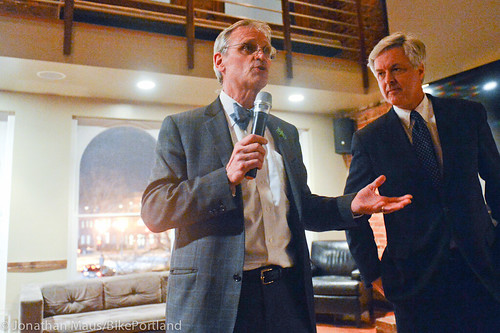 Rep. Blumenauer
Coverage from Washington D.C.
made possible by:

The night wrapped up with the cycling’s Grand Man in Congress: Earl Blumenauer. He said BikesPAC is just as important as any other arm of the bike advocacy movement. “This is about supporting the people who support you,” he said. And it’s working. “Cycling was a punching bag a few years ago; it was a political freebie to beat up on cycling. Not any more. We’re coming of age.”

Blumenthal also said the lobbying has already borne fruit even against what seem like huge odds. “Even in a country of 313 million people,” he said, “where there are thousands of different causes and we have no money — we are able to connect and advance our cause. I mean, we’re not killing it; we’re not knocking it out of the park where every member of Congress says, ‘I fear the bike lobby.’ But we’re coming along. We’re on the right track.”

I like that line about biking in Denmark because it’s “good for the health of their roads.”

I envision an advertisement campaign centered around the concept of showing the effects of particular travel modes on a freshly paved road.
Kinda like “and this is your brain on drugs… any questions?” only not so preachy.

Hopefully something that says
“Look: we know that you love your car but good roads are expensive and we all know that money comes out of our pockets eventually either in fuel taxes, property taxes, bond repayments or higher shipping costs on everything we buy.
“A road can last decades if no weight wears it down (see Chernobyl); every pound on every vehicle counts from tractor trailers down to vans, trucks, cars and bikes.
“We owe it to ourselves to respect that investment of tax dollars in our road system and to make it last as long as possible. If you are able, use a lighter automobile. If you can, ride a bike, public transit or walk. If you must drive drive less and optimize your route so you waste as little of your time and fuel as possible.
“Our tax dollars and our roads thank you dearly.”

We’re growing up, and have realized that congressmen and women are hoes, and that we’ve got to raise the cash to buy our own hoe.

The political climate is a challenge. It really takes financial backing and people on the ground speaking with representatives to make a dent. So glad to have everyone involved with BikePAC working on this at the national level.

Full disclosure: I’m on the board of Bike Walk Vote.

Where are Treks manufactured?

Trek’s domestic high-end frames are manufactured in Waterloo, Wisconsin with assembly in Whitewater, Wisconsin — with the majority of company’s bicycles manufactured in Taiwan and China.
http://en.wikipedia.org/wiki/Trek_Bicycle_Corporation

All of Trek’s carbon fiber frames are now made in Waterloo Wisconsin using their superb OCLV technology. Another reason to buy carbon fiber.

I’m grateful to have these congressmen on our side and for their time to listen to our needs and concerns as we strive to get more people riding bikes, especially for transportation.

But I couldn’t help but be a little sad that they were all men. It’s not surprising given the demographics of Congress and the demographics of cycling across most of the US. But as a female cyclist it makes it obvious how far we have to go to have our distinctive point of view properly represented in political circles.

“But I couldn’t help but be a little sad that they were all men.”

Oh my gosh. I was thinking exactly the same thing. Not just from a woman-bicycling perspective, I mean (though certainly that too), but also from the lens that somehow all these oldish white men are meant to represent the humongous diversity of our country..? Or is this what happens when politics is so wrapped up in money: only the rich/dominant culture get to play?

Totally baseless and not verifiable with solid empirical facts but it feels like a good “common sense” observation.

Ladyfleur: Your analysis of our latest BikesPAC event is correct: our latest slate of Congressional guests included 10 men, but no women. This imbalance was not our intention, and in fact, BikesPAC does have a strong track record of inviting and supporting women Senators and U.S. Representatives. In particular,we’ve stood solidly behind Maine Senators Olympia Snowe and Susan Collins, Rep. Candace Miller of Michigan, Rep. Doris Matsui of California, Rep. Eleanor Holmes Norton of DC and several others. We always invite Senator Barbara Boxer (chair of the Senate Environment & Public Works Committee) to our spring event, but have yet to mesh with her schedule. While we focus on senior Congressional leaders, we work hard to be “bike-partisan” and we also try to develop new champions. We will continue to reach out to engage women members of Congress. Thanks.

“There’s a difference between spending and investment…” I like that. A view I wish more would share.

A week later it hit me: You know what this is, it’s the idea of “money as speech.” The height of corruption, as upheld in the Citizens United decision.

Yes yes, sure sure, that’s how things are done, I agree. But that is because the system is screwed up beyond belief. No one should accept this.

…least of all the people without the money! The game is rigged.