Swing by River City Bicycles tonight for a special event that will bring you up-close and personal with two of Portland’s celebrated bike brands and the people behind them. The event, dubbed “Innovation & Sophistication: A first date with Argonaut and Cielo Cycles” will focus our attention on two very different bike makers.

Cielo Cycles is a brand developed by Chris King Precision Components. The bikes are made out of steel in the same northwest Portland manufacturing facility that pumps out the world’s best headsets and and hubs. Chris King himself spurred creation of Cielo and still even picks up the torch every once in a while. Running the shop is Jay Sycip of SyCip Bikes fame, who moved to Portland from Santa Rosa, California to run the Cielo shop. Another recent addition to the Cielo crew is veteran framebuilder Christopher Igleheart. Igleheart moved to Portland recently from Wenham, Massachusetts to lend his skillful hands to Cielo’s burgeoning production demands. — UPDATE: I just heard Igleheart is no longer working with Cielo. Sorry for any confusion. — Jonathan

Argonaut is a much different kind of company. Founded by Ben Farver, Argonaut was first born as a brand that also worked in classic steel. Ben found some success as a young company, winning a “Best in Show” at the 2008 Rocky Mountain Bicycle Show. After taking a few years to change direction, Ben relaunched last fall with an entirely new look and material. Argonaut is now all about custom carbon fiber.

Come learn more about both of these local bike companies, drink some wine, talk with the builders, and meet other people interested in great bikes. The event is from 7:00 to 9:00 at River City Bicycles (706 SE MLK Blvd.). 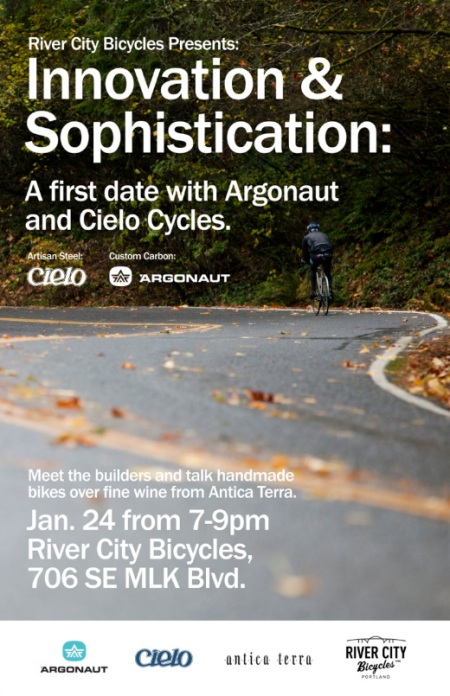 Damn. I’ve been wanting to get an Argonaut between my legs since you stole even more of my productivity by introducing me to Prolly’s blog (http://prollyisnotprobably.com/2012/11/beautiful-bicycle-my-argonaut-road).

The Cielos look nice but check out the intersection between the seat stays and the seat post: very minimalist and that is where your ex$pensive boutique frame will likely break. I love the way CK does things but I wish they would put in more testing and perfect their products before they release them. A cheap Shimano rear hub never needs maintenance like a CK does.

A Honda Civic never needs maintenance like an Alfa Romeo does…

I’m no framebuilder, but I did own a first-generation Cielo back in the ’80s (my first nice bike!). If I recall correctly, it had the same “minimalist” seat stay/seat tube connection that the current frames have. Well, as a beginner racer I can tell you that I put that frame through the wringer – both upright and on the ground – and never had an issue. After years of use I passed the bike on to my 230 lb roommate. He rode it all the way down to 165 lbs (him, not the bike). He then passed the frame on to another lucky guy, with the frame still intact.