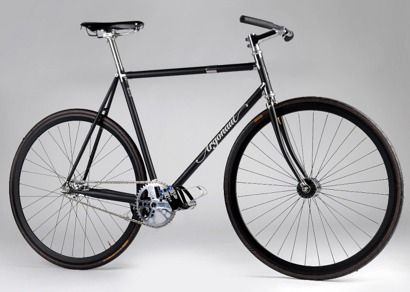 Portland bike builders Ben Farver of Argonaut Cycles and Aaron Hayes of Courage Bicycle Manufacturing each picked up trophies at the first annual Rocky Mountain Bicycle Show which took place in Boulder Colorado over the weekend.

Farver — who works out of a shop on NE MLK Jr. Blvd — won “Best in Show” for his gorgeous black, flat-bar track bike (above) and also won the “Builder’s Choice” award for his single-speed cyclocross bike.

Hayes, who was named “Best New Builder” at the North American Handmade Bicycle Show held in Portland back in February, garnered an honorable mention from other builders for his all-white, fixed gear road bike. 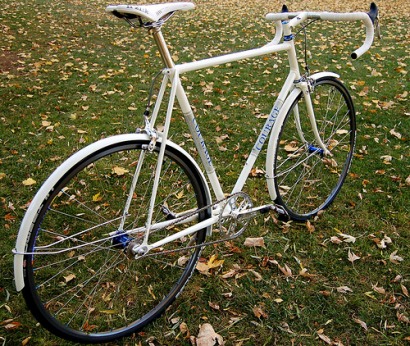 30 exhibitors were featured at the show, including Southeast Portland-based maker of hardwood bicycle frames, Renovo Bicycles.

For more information, check out RockyMountainBicycleShow.com.

Just kiddin’. That’s awesome that Portland can be build great bicycle networks and bicycles to ride on them. Congrats all!

I think Jonathan meant “tarck” bike. You know, the kind for doing barspins on. It’s a whole new kind of skateboarding!

Congrats to Ben! Ben can ride ’em as well as build ’em – he administered a thorough beat-down (in the friendliest possible way) when I met him on Sauvie Island this summer.