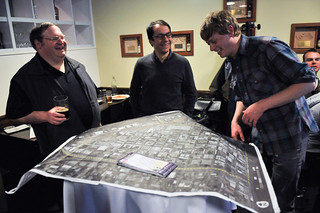 Time to roll out the maps!
(Photo © J. Maus/BikePortland)

In case you haven’t heard, the Bicycle Transportation Alliance is working on an update to their Blueprint for Better Bicycling. The last one was published in 2005, and the map of potential projects they can put on the list has changed considerably since then. The problem is, they don’t know everything you know — so they need help prioritizing which projects should be included this time around.

The BTA has announced three “input sessions” that will take place early next month across the tri-county region:

The BTA is looking for projects that should be focused on over the next 4-5 years. Here’s more from staffer Carl Larson:

“Portland’s Bike Plan for 2030 has a tremendous list of ambitious projects that would improve bicycling in the city of Portland. It’s a great long-term City of Portland plan but we need a plan-of-attack for the entire tri-county Metro area — a plan that helps us prioritize the next few years worth of advocacy work… What are your top 3 picks for projects that need to happen in the next few years — projects sure to improve safety and increase ridership?”

If you can’t make it to one of the input sessions, the BTA has several other ways you can share your picks.

leveling the playing field in these tight economic times to me isn’t so much about spending on bikes as NOT spending on projects that exclusively benefit those who insist on driving.

Ugh. I took the BTA’s survey the other day. They ask you to pick up to 3 favorite projects in each part of town (I think there were about 10 overall), but all told you have to choose from among HUNDREDS of projects, many of them not identified by the most obvious description. I had a number of specific projects in mind, many of which were listed but it still took a hell of a lot more than the recommended 10 minutes to sort through the lists and find them. A map of the project zones for each region would have made it a whole lot easier.

I understand that you don’t need to look through the entire list and if you have specific projects in mind you can just write them in, but this seems like pretty scattershot data collection and i don’t know how much validity the survey results will have.

Fortunately there’s a page at the end where you can write in comments. I summarized my priorities there, since that might not be obvious from how I responded to the other survey questions.