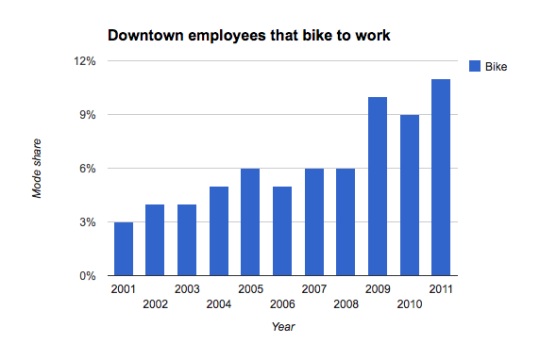 The Portland Business Alliance has released their 2011 Downtown Portland Business Census & Survey and — while transit use is down and driving alone is back to average levels — the number of downtown employees that commute by bike has reached an all-time high.

This annual census is primarily intended to offer a snapshot of the downtown business climate; but the survey also asks downtown employees how they get to work. Since it has been compiled consistently since 2001, the data offer a good look at commute trends.

This year’s results show that 11% of downtown workers surveyed go by bike. That’s the largest number of bike commuters the survey has ever registered. It’s also a 22% increase over last year and an 83% increase from 2008. In 2001 this census found that just 3% of downtown employees biked to work.

Here’s the graph of drive alone commute trips into downtown since 2001: 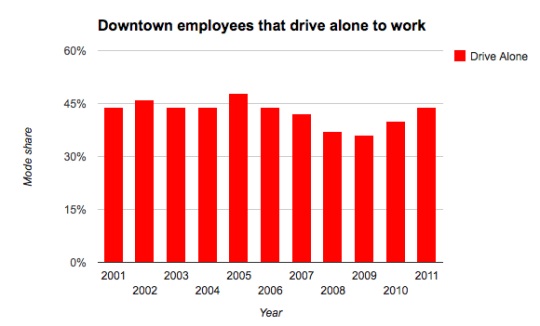 And the same graph for MAX/bus trips: 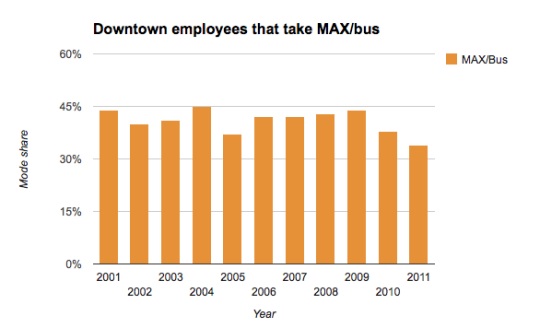 And here are the raw numbers for the three top commuting modes since 2001: 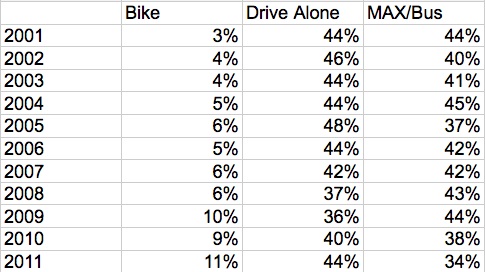 Compared to the other top modes, MAX/bus and driving alone, bicycling has by far the most positive trendline. (If you’re curious, carpooling has been steady at about 5-8% since 2001 and walking has seen slow and steady rise from 2% in 2001 to a solid 5% in 2011.)

Another way to look at the numbers is that driving alone should be considered the “alternative” mode when compared to the big three of active transportation. When you put walking, biking, and transit together, you get 52% of downtown employees using something other than cars to get to work.

The survey sample size was about 800 businesses, or 20 percent of all the businesses located in the I-5/405 loop. PBA estimates the margin of error at about +/- 4 percentage points. The data was collected using mailed questionnaires, personal follow-up, and block-by-block canvassing.

These strike me as very positive numbers for bicycling, especially since in my opinion, bike access into downtown is very inadequate for the majority of Portlanders. If we actually built some protected bike lanes and had quality connections into downtown from over our main bridges and other access points, I think the bike number could easily reach 20% in a year or so.

OPB ran a story last night about how transit is down and driving is up. In that story, PSU professor Kelly Clifton explained that the drop in transit reflects national patterns, “as transit agencies cut service and employers suspend bus passes” due to the economic downturn.

Many of those transit riders could just as easily hop on a bike. Unfortunately, we still live in a city where driving is more convenient, efficient, and safer than bicycling for many people and many types of trips. To really make progress in bicycling, it will take progress in building our infrastructure so that it becomes an attractive option.

The future of transport is human powered.

Couple mistakes: You copied the transit graph for the drive alone graph, and walking increased to 5% in 2011, not 2001.

2% to 5% walking is almost as big of an increase as the 3% to 11% increase in bicycling. Very impressive.

But it would be good to know the margin of error. I wonder if transit usage has really decreased that much, due to the bad economy hurting lower-income workers downtown, perhaps, or if it is just noise in the data.

I remember that the city-wide data that you shared recently showed bike trips nearly flat from 2009 to 2011 but transit increasing during that time; this data seems about he opposite. Perhaps the reality is somewhere in between the two surveys?

On the other hand, the data fit’s with this Metro report, which showed flat transit usage in central Portland (though it increased metro-wide) and greatly increased bike trips: http://bikeportland.org/2012/10/23/metro-travel-survey-in-central-city-biking-way-up-transit-use-stalls-driving-down-79202

It would be interesting to know what the mode share distribution looked like in, say, 1912? I wonder what kind of statistics exist on which to base a comparison?

I suspect that the streetcar and walking would have been the dominant modes, based on my grandmother’s experience crossing the river by streetcar in the teens on her way to school. My understanding is that after 1891 the horsecars declined fairly rapidly.

Jonathan, can you check those charts? I don’t understand why the second and third charts have identical data, just in different colors. Also, the legends and data labels are confusing.

Checked them. Fixed them. Thanks

The phrase “employees that … ” makes it sound like the employees aren’t human.

I hear you. I agree. I’ll consider fixed the graphs.

Sorry. That’s my impolite grammar police reflex coming out. The graphs are perfectly clear as is.

Oh, I found the report that showed flat bike usage but transit increasing: it was the Census: http://bikeportland.org/2012/09/24/u-s-census-says-6-3-of-portlanders-bike-to-work-77680

So this contradicts the Metro study and the downtown PBA reports. Perhaps it’s a difference between the areas studied, or noise in the data?

Steve B.
Reply to  Joseph E

If I understand correctly, the PBA study is downtown businesses, the Census reflects the entire city.

Imagine what the downtown traffic/parking situation would be if you kept biking at 2001 numbers. Why on earth are business and government leaders not pushing obvious ROI and significant investment in more of a good thing? Baby steps I guess, back in 2001 these same business owners would go to the mat to fight an on-street corral . . . maybe they will see the light.

Perhaps they too were Sloviced?
I think it is a measure of how hard it can be for folks used to thinking of cars as the only proper (or grown up – cf John Charles) way of getting around to relax that assumption even in the face of data that suggests otherwise.

“Many of those transit riders could just as easily hop on a bike. Unfortunately, we still live in a city where driving is more convenient, efficient, and safer than bicycling for many people and many types of trips.”

Habit may also discourage biking over transit. Just about anyone can hop on a bus (assuming it is running/on time), whereas switching to a bike from a car may involve psychological and logistical hurdles that have little to do with infrastructure and everything to do with habit, experience, familiarity, peers, etc.

Don’t forget cost! Transit costs go up, people have already invested in a car and may be unwilling or unable to invest additional money in a bike. Buying a reliable commuter is cheap by car standards, but spending $600 – $1500 is significant.

Regarding ‘carpooling’ it is interesting to note how over time the concept has atrophied and, it would appear, now connotes any car with a passenger, everything but ‘drive alone.’ There was a time when the term was used to refer to slightly more ambitious constellations.

11% is 9,635 people on bikes every day into downtown… sure, it’s a small slice of the 87,588 total people in the survey, but it’s still a good number for 20% of the business in a small downtown area… if we project that out to 100% of businesses then we get 48,173 people that commute by bike into our small downtown core…

48,173 people on bikes every day commuting into downtown…

I don’t quite understand the context of these percentages. I bike to work sometimes and drive alone other times; I never take transit. Do these numbers take that into account? Should I be inferring some kind of “on a statistically average day” qualifier to these numbers? Maybe it doesn’t matter…

Having just returned from a walk down by the waterfront at lunchtime, I don’t know why anyone would want to be driving right now, with all the street work going on out there. What a miserable waste of life. At least on a bike, you can walk it up a street or two and be on your way while the cars are still snarled and honking behind you.

If people in your city aren’t complaining about the costs and lack of parking availability, you are doing it wrong. Name a great city that has cheap, readily available parking…

sprawl has created housing with nowhere to work, without traveling long distance to get there…

If you compare the 2010 data with the 2011, you’ll see that the percentage of survey respondents that live downtown grew by five percent, from 37% in 2010 to 42% in 2011. That fact hasn’t been addressed yet anywhere that I’ve seen, but it undoubtedly impacts transit and cycling use.

thanks for bringing up the residence data. I brought it up when I covered this report last year. I agree it’s an interesting stat to consider. There’s obviously more work that can be done with these numbers. Stay tuned. Maybe I’ll put together another post looking at how where people live has impacted the various commute rates.

Obviously the big loser here is TriMet. They lost trips while the other two gained. Which is interesting when you consider TriMet is public and the other two are private. As people turn away from transit and toward private bikes & cars, transportation is literally being privatized. Not all at once, just slowly like starvation. Which I can hardly believe is any sort of happenstance accident in these 1%-dominated times.

The numbers that, to me, are most important are the “drive alone” numbers. How do we get that down? My guess is that $10 gas would have the most effect.

That, and parking pricing.

Wow!…imagine in 120 years there will be 105% commute mode split for bicycles downtown…;-)

Seriously: This report and prior reports on the actual investment PBoT puts into bikeways is putting the ‘shame’ on transit for ROM (return on mobility) and deepens the call for parity: 11% mode = 11% capital investment.