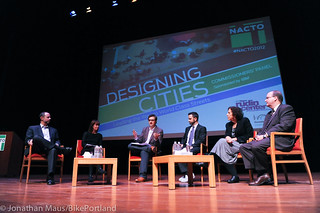 What is the latest thinking on transportation politics and perspectives in America’s largest cities? How do transportation department chiefs view bicycling and transit? On Friday, the top transportation officials from Chicago, New York City, Boston, San Francisco and Philadelphia shared a stage for a panel discussion at the final event of the National Association of City Transportation Officials’ (NACTO) Designing Cities conference.

While Hayes kept the discussion interesting, some common visions emerged, and they’re likely to define the next era of transportation in big cities across America. The topics included the declining role of cars (and the rise of bicycles), financing, equity, battling car culture, and more. 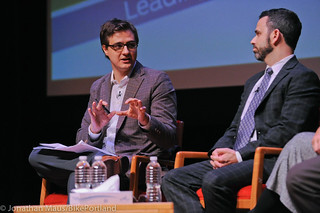 Before opening the discussion up to the panel, Hayes set the tone by saying he finds it “bizarre” that at the local level, transportation is highly controversial and “incredibly political,” but that it’s “completely absent from our national conversation.”

That’s a concern echoed by many at the conference. “Politics matter,” said Rina Cutler from Philadelphia, “You’d think transportation, given that it is an economic development issue, would be front and center in anyone’s conversation about jobs; but sadly nobody’s looking at it from this perspective.” NYC’s Sadik-Kahn puts it more bluntly. “Ignoring cities is perilous for our country.”

“The most cost-effective investment we can make for moving people is bicycle infrastructure.”
— Ed Reiskin, SFMTA

In this context, cities are deciding to innovate and look for funding on their own because they can’t afford to wait for the federal government. But how are cities finding money in a period of such slow economic growth? With the “politics of austerity” winning the day at the moment, Hayes asked the panelists how scarce funds are changing their plans.

Sadik-Khan said her work has proved that there are many things cities can do that don’t cost a lot of money. “We painted those plazas,” she said, and then added for emphasis, “we painted them.” Instead of waiting 3-5 years for large capital projects, NYC DOT is doing interim projects on the cheap. They’re claiming the road space and making it usable now, without waiting for large federal grants. Sadik-Khan also mentioned the role of private funding. Citibank has invested $41 million into the New York City bike share system. 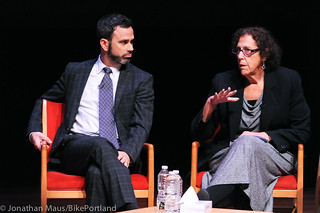 It also comes down to being smart with the money you do have, said SFMTA Director Ed Reiskin. “I think being strategic about how we invest money and doing it cost-effectively is key. And the most cost-effective investment we can make for moving people is bicycle infrastructure. It’s much cheaper to put in a bike lane than making a new subway.”

The prudence of investments in bicycling was shared by several panelists. Gabe Klein from Chicago said Capital Bikeshare in Washington DC (which he helped start as that cities transportation chief) is now making money after an initial city investment of $1.2 million and after only two years in operation. “It’s a profitable transit system.”

Here’s more from Klein about why he’s so bullish on bike share:

“The more we can move to active transportation — I guess I would call it active transit where you don’t have the union and you don’t have the driver because the user is driving themselves — and people can be healthier and stations can be modular and solar- powered; those kind of things need to be a part of the equation.”

After private sector funding came up several times, Hayes brought up concerns that private funding might be at odds with a transportation system that is equitable to all citizens.

“Who speaks for the commuter in east New York,” he asked, “who has a really super-long commute?” Hayes worried that private corporations won’t be interested in projects that serve poor neighborhoods if they don’t align with their marketing goals and bottom line.

Reiskin and Klein gave examples of how they’ve dictated terms of contracts with car sharing companies to ensure they place vehicles in underserved neighborhoods. “We have hundreds of billions of dollars worth of public space that these private companies need to make their businesses grow, so we can dictate the terms of how they serve people,” said Klein.

“I think in a strange way, Robert Moses gave us a great gift in that there was so much concrete poured we can now re-purpose it.”
— Janette Sadik-Khan, NYC DOT

Sadik-Khan said bike share, which they plan to install in affordable housing areas, will be a key “last mile” boost to communities that are currently cut-off from the existing transit network.

Hayes then moved on to the topic of behavior change. He said that cars “dominate the built infrastructure” and yet they’re, “speeding machines of death.” Hayes wondered how the panelists talk about wanting to reduce the amount of driving people do when our psychological connections to cars are so strong.

Philadelphia’s Rina Cutler said she takes the long view. “I think for me it’s more evolution versus revolution,” she said. “I don’t think people are going to pay attention to me when I say, ‘You ought to get out of your car!'” If cities give people options and provide choices, Cutler sees a natural evolution away from driving. “Ultimately we will get to a point where people will get out of their cars…or leave it at home a few days a week. I just think it’s really about evolution to get to that point.”

“And balance,” Sadik-Khan interjected. “The secret of cities,” she continued, “Is that people get around without a car in large numbers.” To do that, she too said providing high quality options is key:

“Two-thirds of New Yorkers get around without a car, less than half don’t own a car; but you still have that psychological thing around cars… Like it’s a constitutional right. There’s something deep in the national psyche about that. So you’re not going to wish people onto the bus if the bus stinks. They’re going to get on the bus because the bus is faster, it’s clean, and it gets to where you need to go. You’re going to get on the bike because it’s there and it’s the fastest way to get across town.”

Tom Tinlin from Boston echoed that sentiment. “The overarching message in the end is consumer choice.” And once you get someone to try the bus or a bike, “It’s making sure the experience makes them want to come back,” said Tinlin, “There’s no better marketing than that.”

Hayes then played devil’s advocate, asking the panelists to convince him that all this talk of bikes and buses and reform isn’t just some swing in fashion; but that it’s real and substantial progress. “Convince me that 30 years from now [NACTO] won’t be sitting in this room undoing whatever Janette Sadik-Kahn’s version of the Cross-Bronx Expressway is.” 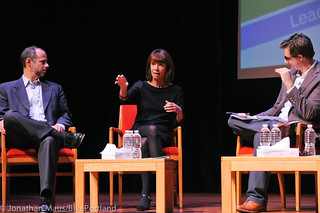 “Because you don’t have a choice,” Sadik-Khan replied. “You’re not going to accomodate the growth in these cities with single-occupancy vehicles. You can’t. The status quo absolutely will not work. If you want to follow the status quo, you’re going to be one of those metropolitan areas that will not make it.”

“I think in a strange way, [prolific road builder] Robert Moses gave us a great gift in that there was so much concrete poured we can now re-purpose it.”

All the panelists agreed that it’s not just the math of fitting more people in a constrained geographic space, it’s about economic development. Sadik-Khan went so far as to call her approach to street design an “Economic development strategy.”

Whatever the reasons, all the transportation leaders made it clear that transportation reforms must happen now; even if the politics aren’t quite ripe.

Sadik-Khan has spent plenty of time in the political pressure cooker. She said taking polls to assess a project or program’s feasibility, “Is not how you lead.” “That not how you get things done,” she continued, “By looking in the rear-view mirror or holding the microphone up to everybody.”

Gabe Klein was even more blunt. “It’s change or die,” he said, “We just have to do the right thing against political odds.”

The sleeper maybe Los Angeles. Measure R (already passed in 2008) and Measure J (before the voters this Fall) would use a County 1/2 cent sales tax to collectively raise well over 120 BILLION local dollars for transportation, raul mostly (subway and light rail mostly) in Los Angeles County.

That sounds interesting Dick. It was unfortunate that the LA DOT guy was on the program, but did not show up to the panel.

She said taking polls to assess a project or program’s feasibility, “Is not how you lead.” “That not how you get things done,” she continued, “By looking in the rear-view mirror or holding the microphone up to everybody.”

Sadik-Khan is of course correct in this–but this also explains why city retrofit is not on the national political agenda. The two political parties that (sort of) run this country govern by doing little other than looking in the rear-view mirror.

9watts
Reply to  Al from PA

Thank you Jonathan. This I think is one of my all time favorite stories here on bikeportland. So inspiring. Pretty much the exact opposite of that dreadful looking in rearview mirror Oregonian editorial yesterday.
http://www.oregonlive.com/opinion/index.ssf/2012/10/people_like_their_cars_a_fact.html

I also thought that it was a great juxtaposition to the Oregonian editorial. This shows how clueless and backward looking the Oregonian is. But I was impressed by the comments to that editorial, though. Usually, you can forget about the comments on oregonlive, but here the majority actually seemed to understand the flaws of the article and automobile centered planning!

What does this mean: “less than half don’t own a car”?

Here’s one (not terribly current) answer to that question:
http://www.cars-suck.org/research/censusrelease.html

Sorry – hit the wrong button. I mean to include the relevant passage:

Newly released U.S. Census data show that 54% of New York City households do not own or lease a motor vehicle (down a scant 3% from 1990). Manhattanites are the most car-free; 78% of households there do not have a vehicle. In the Bronx, the car-free share of households is 60%. Brooklyn is also majority car-free, with 54%. Only Queens and Staten Island have car-free minorities: 34% and 20%, respectively.