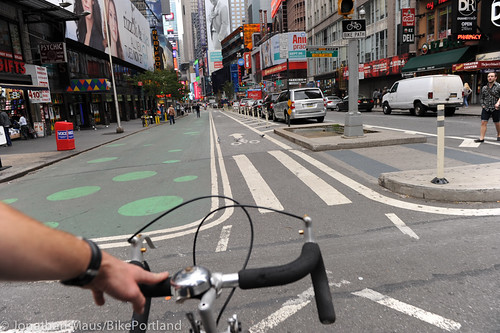 The new view of Broadway north of Times Square.
(Photos © J. Maus/BikePortland)
Coverage from New York City
made possible by:

Of all the projects undertaken by NYC DOT Commissioner Janette Sadik-Khan, perhaps none of them are as high-profile — or were as high stakes — as the public plazas and protected bike lanes on Broadway through Times Square.

Speaking at a panel at the NACTO Designing Cities Conference on Friday, Sadik-Khan said, “If we took a poll before we closed Times Square, it would have never happened. Thankfully, it worked out.” 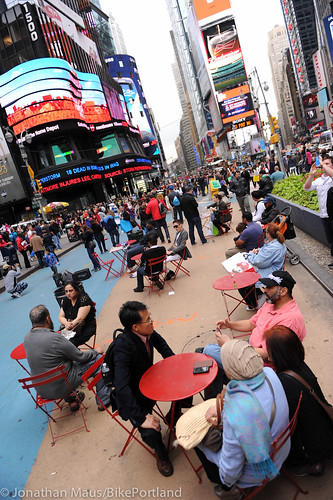 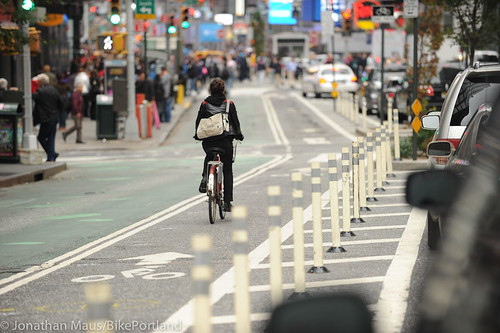 Times Square is an American icon, and up until its transformation in 2009, it was an icon that included a roadway clogged with taxis and private automobiles. One of America’s marquee streets jammed with cars. It was symbolic in many ways. The throngs of people not in cars huddled onto sidewalks and scurried across the streets, as cars honked and nudged and intimidated them. Now, where cars used to dominate, kids play and people sit, eat and chat. No other project done by the DOT in recent years has done more to capture the spirit of the transportation reform that is happening here.

In addition to many blocks of plazas, there is also a protected bike lane that starts at Columbus Circle at the southern tip of Central Park. The bike lane takes several different forms between 59th and about 13th. Sometimes it’s painted green and curbside, other times it’s buffered with plastic bollards and paint from a row of parked cars on the right and plaza space on the left. There are lots of median islands that also help create separation. At intersections where people in cars turn left, there are bike-only signals to prevent left-hooks. There are “mixing zones” where the space is shared, and there are some plaza areas where you’re made to dismount. 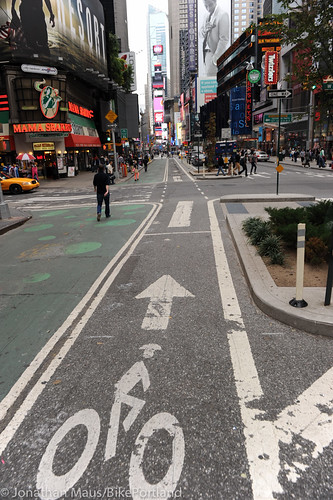 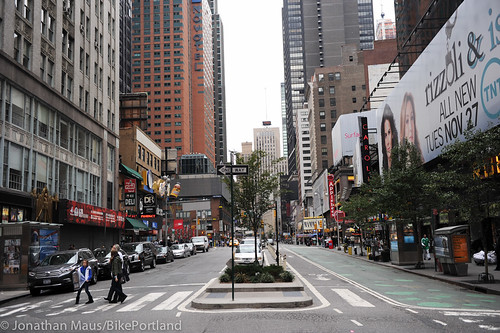 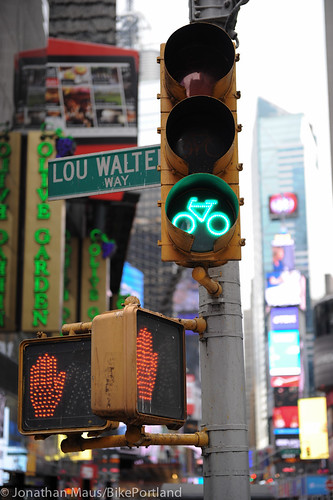 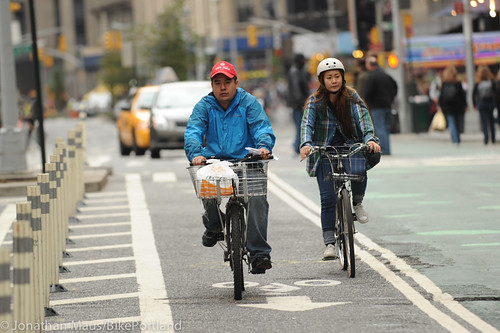 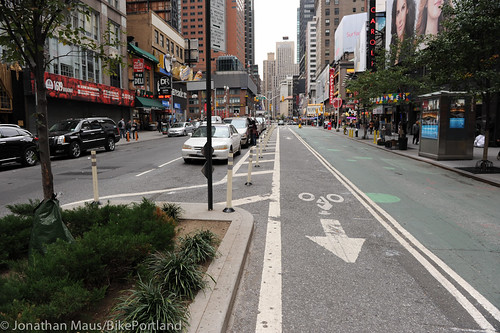 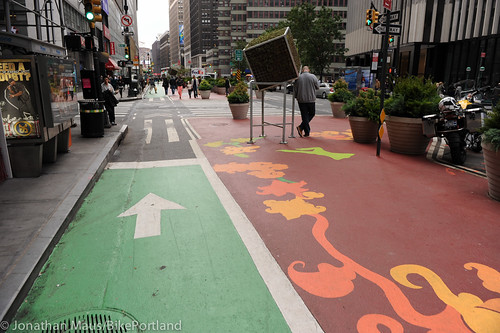 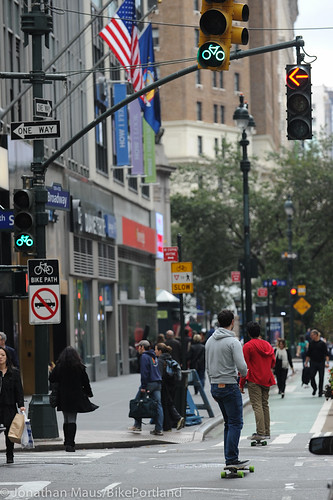 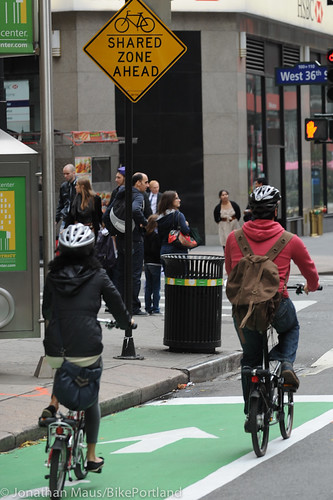 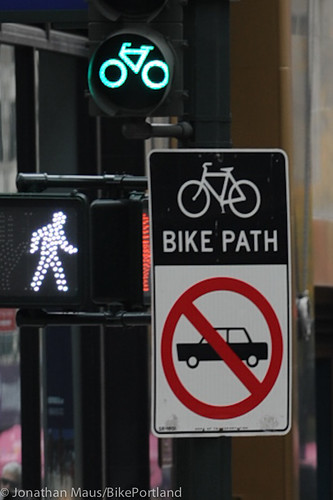 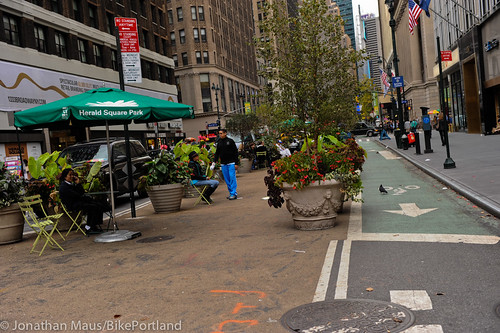 As for bike traffic, it definitely wasn’t crowded; but it was used. I would love to see it even busier, as I think it would help reinforce that the lane is a legal travel lane and that people should not walk or park cars in it. As with much of the new bikeways in New York City, the important thing on Broadway is that the space has been re-allocated. DOT can always go back and beef up the bikeway in the future.

Overall, it’s not exactly the most efficient and stress-free route. There is so much going on on the street that it felt chaotic at times. In front of one hotel, a van operator sat parked right a brightly-colored green bike lane. I asked if he knew he was in a bike lane. He said yes, but that there was nowhere else to park and that DOT had given him a permit (I didn’t press him on that, after all, there was plenty of space to just go around his van). And of course, being so close to public plazas, many people wander into the bike lanes as they take in the sights. Being a transportation tourist simply in awe of everything, I embraced the chaos; but I can imagine if I was late to work or a meeting I might take another route (or just take the lane where I could). 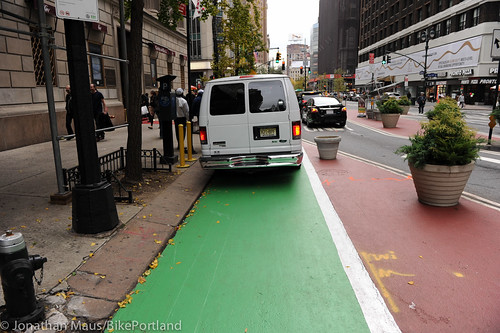 At one point, as I walked my bike in one of the plazas, I saw an older gentleman sitting in a wheelchair. He looked like a local, so I struck up a conversation. 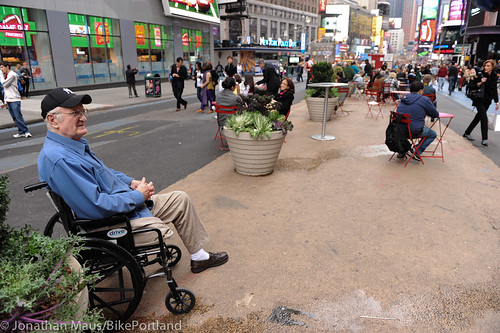 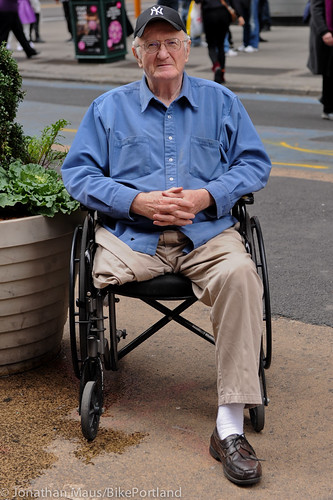 Bill Knox is a 75-year old retiree who lives just a few blocks away. I asked what he thought of sitting in his wheelchair in the middle of Broadway. “I was really against it at first. I was afraid it would be crazy, you know, with all the traffic. But it’s a good deal, a good thing. It worked out OK.” Mr. Knox said he used to roll over to Bryant Park when he wanted to get outside, but he has allergies so he stopped going there. Now he seemed perfectly content people-watching and taking in the view.

I also met a man named Danny. He was visiting from Toronto. He sat, legs crossed, smiling serenely. 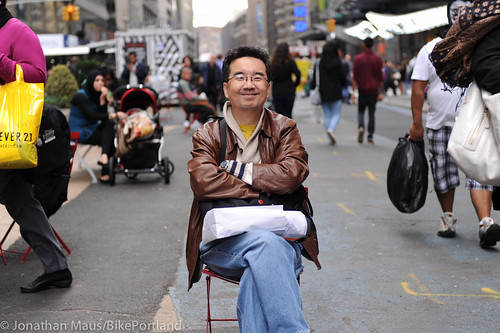 The design of the plazas is spot-on. People were playful (which is really the goal of any quality public space), there is plenty to see and do, and there’s great food to eat (thanks to local food trucks parked right in the plazas). At intersections, there were two friendly and helpful “Pedestrian Management” workers. I loved watching them help ferry people safely across a busy street between two plazas. 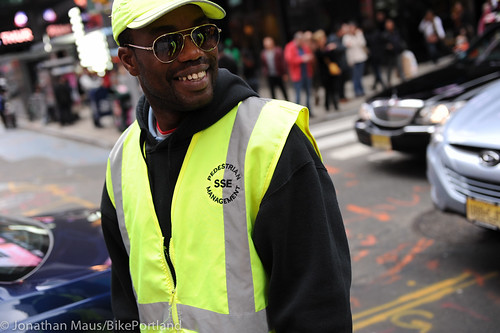 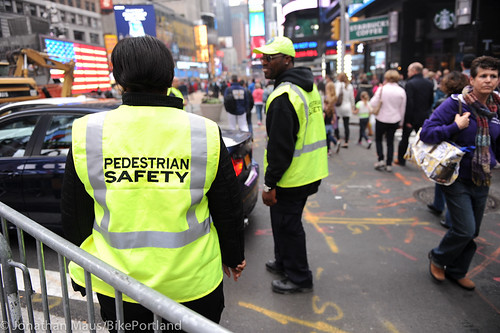 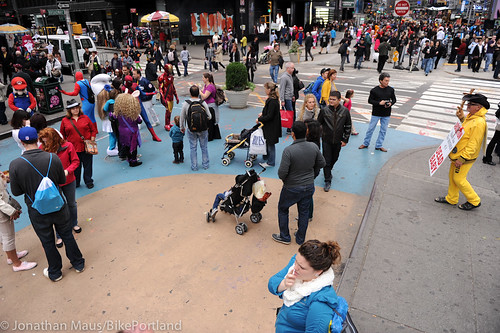 For another perspective, I made a little video of my ride down Broadway. Check it out below…


The protected bike lanes and the plazas on Broadway are an immeasurable win for livable streets. With high visibility to tourists from around the country and around the world, the impact and inspiration from this new symbol of American streets will reverberate far beyond mid-town Manhattan. 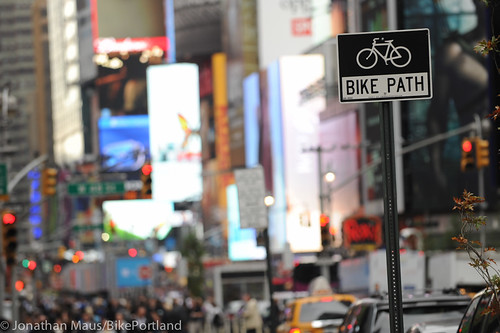 wow, Times Square has certainly changed since the last time I was there which was roughly 2005. Looks mostly positive to me!

I know this isn’t exactly a fair comparison, but seeing these pictures makes me wish certain sections of our own downtown would become completely car free. I would bet my life that if done properly they would become magnets for economic activity.

…or magnets for people, which used to be the point of public spaces.

That Bloomberg quote was spot on: “…streets are there to transport people,they’re not necessarily there for cars…”.

Get ONE car-free shopping district in the city. Other businesses will see the success and want in on the action.

Nice. Too bad it’s all going to be underwater tonight.

whoa-i was a messenger in nyc for a few years in the 90’s, but I haven’t been back since. these photos are completely surreal-part of me believes you are perpetrating an elaborate photoshop hoax! thanks for all the pics and updates!

NYC is a Great city. I dig the interaction with the wheelchair user. The people are used to being in close proximity with other people and usually take it in stride when spoken to by strangers. When someone says “Hey pass me the mustard” at Carnegie Deli he is being casually familiar, not rude.

(the pastrami is awesome)

I’ve come across people parked in our Broadway buffered bike lane (alliteration not intended) to unload, too, despite there being spaces open in the parking lane. It’s a lot worse there, since with the parked cars there’s literally no way around them other than hopping the curb onto the sidewalk.

Wow, Times square is a lot less crowded than it is in the summer. IDK how much the storm has to do with it. In the summer it’s hard to ride in the bike lane because the people are just milling everywhere.

Thanks Jonatahan. Hope you brought some dry socks…

Jonathan, I think you left out an important word here (inserted):

As for bike traffic, it definitely wasn’t crowded; but it was used. I would love to see it even busier, as I think it would help reinforce that the lane is a legal travel lane and that people should [not] walk or park cars in it.

HOW DID YOU MAKE THAT CAB DISAPPEAR?!?!?!

Much of the 1960s/ 1970s European success in pedestrian plazas was to ration space among competing users to keep those that were vital (pedestrians, local shoppers, and local good delivery…while relocating parking and regional/ district traffic that could go elsewhere or be converted [into bike trips].

Interesting video. What did you shoot the video with and why does it look so weird? Some crazy kind of software image stabilization process happening there or what?

A note about the video:

It was made with a Nikon D3s.. which is a D-SLR camera. And I clipped some of the sections to edit out stopping at red lights. As for why it looks sort of odd.. I have no idea. Must be what YouTube did when they converted it to a smaller size.

Jonathan, did see Casey Neistat getting ticketed or falling off his bike?

Great video. Gets me excited to see what the final product on Williams will soon look like.

It’s amazing how much they actually just did with paint, just as Sadik-Khan said! It doesn’t look like very costly infrastructure, just some paint, pots and bollards.

I loved the picture of the no car sign.
More of those please!

…..Well Jon, your video has documented up all the stereotypical observations of the Bike Snob NYC as to the behaviors of NY cyclists right down to your “Cat5” overtaking of those obvious tourists 😉

P.S. Loved the video – reminds me of biking in Boston and driving in NYC

“I think it would help reinforce that the lane is a legal travel lane and that people should not walk or park cars in it.” — There is no place in Manhattan that people “should not walk.” Egad, Manhattan is the one relatively authentic place in the country where people can walk everywhere and vehicular travel just has to make due. Don’t try to turn NYC into another Portland, where pedestrians have to be on the lookout for wildcat motorists and cyclists (even on park pathways), where actual humans on foot have to push buttons to cross streets while vehicles are prioritized. NYC is pedestrian paradise, and there is nothing that compares to experiencing it and living it on foot. You are missing so much detail and so many amazing nooks and crannies down almost every block if you’re just whizzing around it on a bike.

The Broadway bike lane is tricky to use, especially near Times & Herald Squares, as tourists from around the world find it is an ideal place to walk four-or-more-abreast holding hands, and one needs to be quite assertive to make forward progress. That’s one reason why it isn’t used particularly heavily. Traffic lights are also timed to prioritize grid streets, rather than Broadway. Fortunately there have been more north-south protected bikes lanes installed on Eighth & Ninth Avenues, just to the west; the Broadway lane used to be the only protected route down western Manhattan.