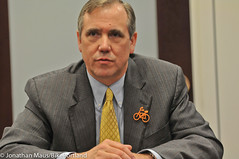 This past Saturday, Oregon Senator Jeff Merkley accomplished a major goal: He completed an Iron-distance triathlon. That’s a 2.4 mile swim, a 112 mile bike ride, and 26.2 mile run. That’s major. He was so psyched about it, he tweeted a blurry photo of himself near the finish line (see it below).

According to his Deputy Communications Director Courtney Warner Crowell, the 56-year-old Senator competed in the PPD Beach 2 Battleship race in Wilmington, North Carolina. Wearing bib number 561, Senator Merkley was one of 630 competitors in the field that completed the full, Iron-distance event. 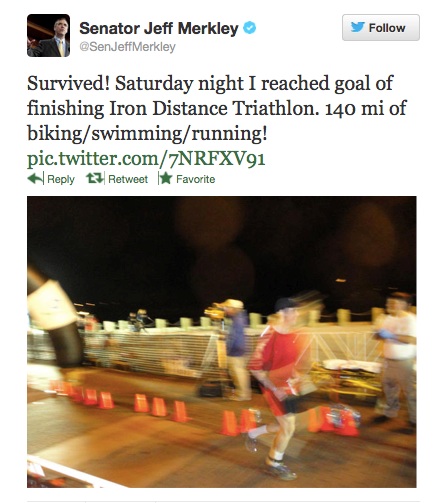 An article (and video) in The Oregonian back in August said that Sen. Merkley loves his time training and competing because he helps him deal with the stress and swings of life on Capitol Hill. Check out the video below, which shows the Senator riding on the Banks-Vernonia rail-trail…

Back in March during our visit with Sen. Merkley during the National Bike Summit, it became clear that he’s emerging as a major champion for bicycling in the Senate. Putting in the miles on the road to compete in his next triathlon will give him plenty of time to think about bike issues.

And if you think that’s cool, there’s also a presidential candidate who’s completed the IronMan more than once: http://www.garyjohnson2012.com/front

A senator that can go the distance for sure!!