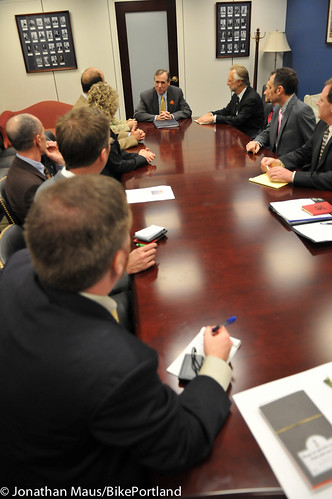 Jeff Merkley is Oregon’s bike champion in the Senate. He’s only been at the job for a few years, but from what I’ve heard, he’s poised to become one of the most powerful voices for bicycling on Capitol Hill.

Today, as part of the National Bike Summit’s lobbying day, a dozen bike advocates from Oregon paid him a visit. Sen. Merkley only had a few minutes to chat (he was due on the Senate floor to present a budget amendment); but our visit was a chance to put faces to names and to remind him that there are people back in Oregon who appreciate his support.

Back in November, Merkley offered up an amendment to the Senate transportation bill that would have dedicated 2% of surface transportation funding to bicycling and walking. Merkley apologized for not getting that amendment into the final bill; but he added that, “We’ve got to keep letting them know that bicycling is the most cost-effective thing for our transportation dollars.”

It was also great to hear that Merkley is thinking beyond legislation when it comes to helping biking in our state. After he had a meeting with representatives from Nike, Merkley asked us why Portland doesn’t host an Ironman Triathlon competition. Merkley also asked us if there was a rail-trail he could get out and ride on. Cycle Oregon director Jerry Norquist piped up and told him about the Salmonberry Trail, a new project his organization is working on that would connect the Tillamook State Forest with the coast.

“That’s great,” Merkley said about the trail, “If I can do something to draw attention to that, to make that happen, let me know.” 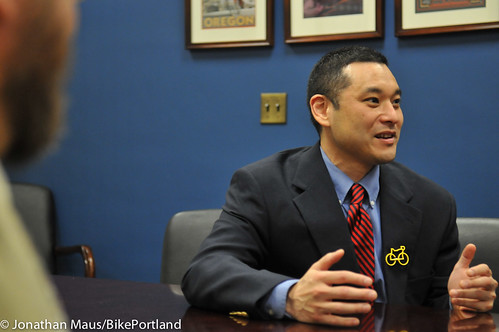 Before his staffers came and pulled him away, the executive director of the Oregon Bicycle Racing Association, Kenji Sugahara, told the Senator about how bike events across the state are stimulating the economy and creating jobs. After Sen. Merkley left, we continued a discussion with his transportation policy staffer Angela Crowley-Koch. Tom Archer, outgoing president of the Northwest Trail Alliance, shared how his organization has leveraged funds from the Recreation Trails Program to buy a new trail building machine. Michael O’Leary with Bike Walk Vote asked about the Senator’s stance on the Columbia River Crossing project (he supports the project feels “something needs to be done,” and Crowley-Koch says he’s staying “on the sidelines” until a solid financing plan emerges).

Here are a few more photos of our visit… 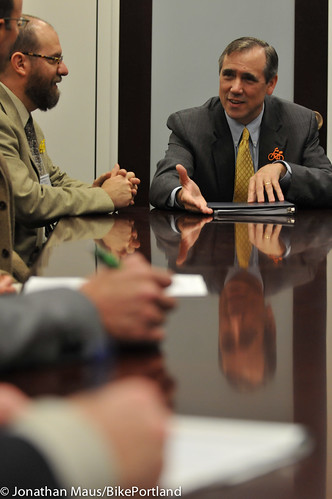 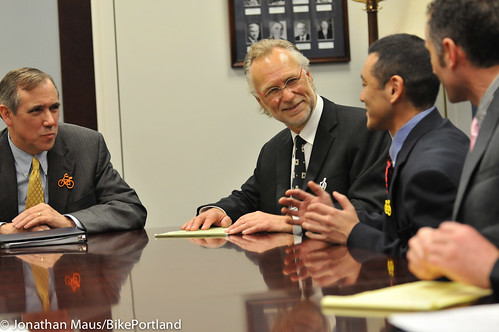 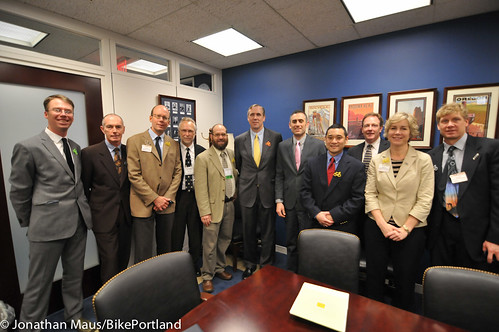 — This is ongoing coverage of the 2012 National Bike Summit, which is being brought to you by Planet Bike.

short visit, but a productive one maybe? Great coverage. Good to think that a little bit of face time can potentially accomplish a lot with an elected official.

I see several supporters of Preserving Oregon Roads Ballot Initiative to Ban Studded Tires in the photo. I hope they talked with Sen. Merkley about the potential savings from banning studded tires! I’ve called his office several times to get his endorsement, he has yet to respond. That potential savings could help fund some bike infrastructure projects around Oregon. There’s no new money coming from the Federal Gov., we need to protect our valuable infrastructure if we expect to have any money left to do other projects.

I hadn’t been aware of Merkley’s bike advocacy. Even without knowing that, I’ve already started to consider him our Best Senator Ever!

I’m thrilled to hear that CO is interested in developing the Salmonberry Trail (even if their involvement means it will likely be paved). What an awesome route to the coast, and a great boost to bike tourism that would be!

I had been under the impression that CO was looking at a potential rail-trail along Hwy 30 to Astoria, rather than the Tillamook Railroad alignment. Or are both being looked at? That would almost be too good to be true.

Alicia- lots more wonderful ladies in the delegation. We were split up through many visits. The DeFazio meeting was going on at the same time. Kristin Dahl, Sheila Lyons, Diane Chalmers, Alison Hill Graves, Jeanette Kloos, Ellee Thalheimer, Michelle Emmons and Anna Laxague were also part of the delegation.

I just don’t understand how he can be supportive of the CRC 🙁 I liked him but I will never vote for someone (again) who thinks that ramming this down the spine of portland is a good thing.

The article is corrected to a position that I share, which is that something needs to be done. I’ve never driven it, but from the perspective of a person on bike, it’s insane.