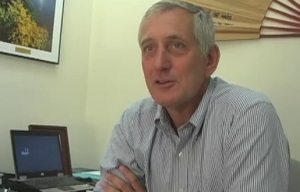 Hales being interviewed in 2010 for
a documentary about Critical Mass.

Charlie Hales, the leading candidate for Portland mayor, rode undercover on Critical Mass during his previous tenure as a city council member. People who were on the 2001 ride say his presence — and his testimony about it that ran counter to the version being told by the Portland Police Bureau — had a major impact on how participants were treated. The story of Hales’ involvement with the ride is part of a forthcoming documentary called Aftermass by local filmmaker Joe Biel.

Hales served as Transportation Commissioner during his stint on Portland City Council from 1993 to 2002.

Biel released an unfinished clip today that features an interview with Hales from August 2010 (when Hales was already considering a mayoral run) where he speaks about his decision to join the Critical Mass ride. “I wanted to see how people were being treated,” he said.

Here’s more from the interview:

“I had heard the concerns from the community about how the Police Bureau was comporting themselves… and I agreed where they [Critical Mass participants] were going from a political and policy standpoint, so there are times when it’s just better to show up and be there and change the dynamic with your presence; and I thought, I can do that. Because, if a sitting city commissioner was sitting on a bike seat, going down the street and the Police Bureau knew that, they would, perhaps act differently.”

At the time, the Police Bureau was still locked into a cat-and-mouse, ‘we must stop the anarchists!’ mentality when it came to dealing the ride. Also speaking in the clip is veteran bike activist (now lawyer) Mark Ginsberg. Ginsberg said at the ride Hales attended undercover, the police officers were “really aggressive.” When those officers reported back to city council that the riders were unruly, Ginsberg says Hales was there to disagree. “Charlie said ‘No, that’s not how it’s happening on the street.’… He said, ‘I was there’ and that wasn’t his experience.”

Ginsberg went on to say that Hales’ attendance, and his willingness to stand up to the police, helped spur a conversation at city council to revise the PPB’s enforcement strategy.

Another activist who rode in many Critical Mass rides at the time, Fred Nemo, said Hales’ involvement had an immediate impact: “When Charlie Hales came in, our escorts became bicycle cops instead of motorcycle cops and they spoke to us courteously and had fun on the rides. When Charlie Hales went out, it returned to apartheid.”

Later in the interview, Hales elaborated on his position about Critical Mass:

“What I was concerned about was the fact that the police thought this was even a big deal at all. I thought, hey, these are just some people riding bikes. If somebody gets hurt, they’ll call 911; but why don’t we just leave these folks alone? And I thought that would have been a better strategy on their part.”

This clip shows a side of Hales that we haven’t seen on the campaign trail. On the contrary, Hales has seemed less the activist than his competitor, Jefferson Smith. I’ve criticized Hales for what I’ve sees as his attempts to perpetuate to the false narrative that “bike projects” are unfairly siphoning all of PBOT’s funding and that Portland needs a “roads first” approach (which I see as code for ‘stop wasting money and time on bikes’). It’s great to see him in this light, as someone who is not afraid to lead based on what they truly believe in — not what they think will get them the most votes. It makes me wonder thought, why hasn’t Hales mentioned his Critical Mass involvement in stump speeches? It certainly seems like something he should be proud of.

“It certainly seems like something he should be proud of.”

We (some of us here surely) think so, but he doesn’t seem to be wooing us on this campaign.

Very interesting, especially the part about undercover referring not to other participants but to the police.

Guess this was before Hales decided to agree with the Boregonian that bicycles cause potholes.

October Surprise? I still don’t trust him OR the cops. I’m writing in Sam Adams. What the hell.

No story here, just perhaps a distraction from the issues. The Critical Mass ride is non-existent in Portland.

I’d like news on why Mr. Hales is supportive of the plan to spend $4-6 billion on a freeway that adds 6 lanes to speed up the commute for suburbanites in WA state. That’s the CRC project.

Has anyone wondered maybe it’s because Hales just isn’t a very good candidate, but really is good at governing? That’s not terribly uncommon, particularly for local politicians.

Write in! Don’t support a tax / vote cheat or a petulant anger and violent man child.

No thanks. This guy is the next Tom Potter.

I want to like Charlie Hales. But his pro-CRC agenda just leaves an incredibly sour taste in my mouth, yuk.

I like hales too, not such a big fan of spending the dough on crc. It’s not the mayors project so maybe his view on it isn’t so important

I think this Hales’ concern here though is more from a concern of police brutality than cyclist rights.

I enjoyed the clip all the way until before the very last word. Disappointed to see something positive turned into something distasteful.

Despite Charlie Hales’ record of being very pro-bike over the years, Bike.Walk.Vote. endorsed the other candidate in this election. I wasn’t part of the BWV endorsement process, but it seems to me they picked Smith based solely on his opposition to the CRC and ignored virtually all other meaningful criteria important to bicyclists. Perhaps BWV believes that opposition to the CRC is the single overriding issue that renders all other issues unimportant in this election. But it would been helpful to know their bias from the beginning. If BWV would state their position openly, it would would go a long way toward helping the rest of us make sense of their endorsement decision.

You’re welcome to review the press release we posted.

Certainly, because dozens of our members voted that the CRC highway mega-project and equity issues were their top priorities, we gave more weight to those issues. I’d call it “priorities” – you can call it “bias.”

But if you review the answers to the questionnaires (publicly available!) you can see we considered many, many issues, including the long records of the candidates.

And remember, Bike Walk Vote includes walking and transit as well as biking.

As a legislator, Jefferson Smith showed a real interest in transportation choices (leading to an effort to help improve safety at MAX stops), and a willingness to do politically difficult things (including being one of the few voting against the highways-heavy transportation package that was a top priority of the Speaker).

I’m glad Hales has been generally pro-bike. Hopefully he’ll continue that if he wins the mayoral race.

I’m also proud of the BWV endorsement, and want to make sure people know it included more than a CRC mega-highway screen (though given that it’s the MOST expensive project in the region’s HISTORY and will drain funding for choices for the next two generations, it’s f’in important).

I no longer sit on Bike Walk Vote’s board. I speak only for myself.

Thanks, Evan. I appreciate your response. You’re right: “priorities based on members’ input” is a much better term than “bias.” I guess I should get more involved in the process next time!