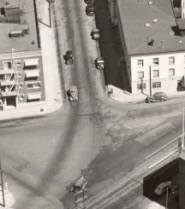 The notorious Broadway/Flint/Wheeler intersection has been getting a lot of attention lately. Just today I rolled up on PBOT traffic safety staff and engineers observing the new partial closure of Wheeler, while a PPB officer talked with Paramount Apartments owner Betsy Reese. In addition to the closure, the Portland Bureau of Transportation (PBOT) has followed through with promises to business owners in the Lower Albina district by removing several on-street parking spots to make it easier for large trucks to turn in the area.

But a lot of work remains to make this area hospitable to all road users. It’s a mess and the addition of the new streetcar line — set to open later this month — will only add to the traffic safety issues.

While we continue to think about this intersection, and PBOT and ODOT continue to tinker with it, I thought it’d be fun to share a historical perspective. A reader recently shared a post on the Vintage Portland blog that featured this intersection as it looked in 1940. Check it out below… 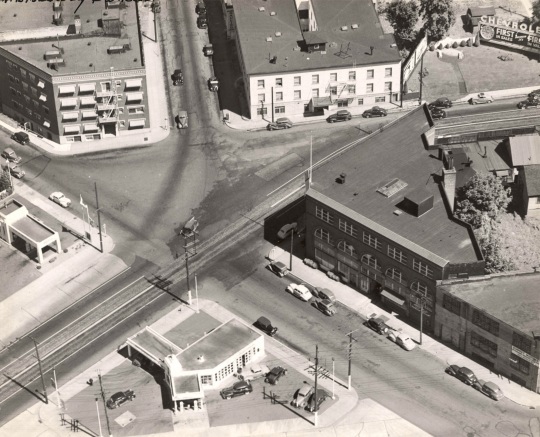 The building in the upper left is the Paramount Apartments, and of course the street in the upper middle of the image is N. Flint. Today, there’s a median island that stretches from the apartments all the way to Broadway, forming a peninsula bordered by Flint, Broadway and Wheeler. Compare the image above with the view today… 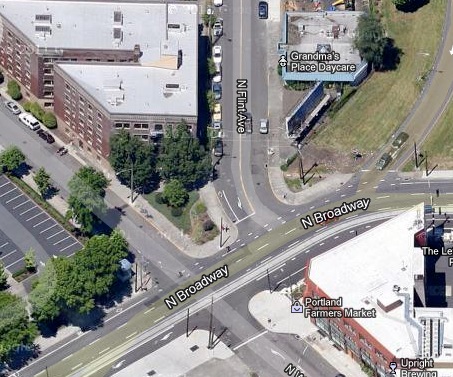 Given all the change that’s coming to this area (the streetcar opens later this month and ODOT/PBOT would like to spend $400 million to widen I-5 and make other changes), I’m sure this intersection will look a lot different in another decade or so.

I love historic photos. And I love that there is less asphalt today than back then.

Well, maybe a little bit less at this location….

There is definitely less if you look at the images of I-5 being built: http://vintageportland.files.wordpress.com/2011/02/a2005-001-181-eastbank-freeway-construction-near-broadway-and-weidler-east-1962.jpg

Goodness, what a mess that was! Thanks for linking to those photos. Man, how I despise freeways.

Awesome photo – look at all that empty land near Benson, and in the Lloyd District. Oh, and Lloyd Center long before they roofed it.

Interesting. To my eye, the 1945 intersection looks more dangerous for bicycles than the modern version. The large asphalt triangle seems like it would create chaos, and the fix, which admittedly created the too-close-for comfort convergence of Flint and Wheeler, does make for a nice, small greenspace for the apartment complex.

I don’t think this is a failure of design as much as it’s an example of how cities evolve. What seems fine in 1900–or 1945, or 1981–is not always relevant in today’s paradigm. It’s not “wrong” design, per se, but shows how we need to constantly adapt and change.

Chris I
Reply to  LoneHeckler

It was probably safer, because cars weren’t flying by at 40mph and initiating turns without warning. From the looks of it, all users there had to yield, so I would imagine that the traffic would flow fairly slowly. The throughput of the intersection was undoubtedly lower, but I would guess that it was safer.

exactly, there wasn’t as much car traffic because the streetcar ran down Broadway and people weren’t yet totally car-dependent…

Randall S.
Reply to  Chris I

There also probably wasn’t a freeway entrance that people were rushing to get on so they could drive back to the suburbs (at 15+MPH over the speed limit).

John Lascurettes
Reply to  Chris I

I’m also noting the tire/exhaust patterns (darker lines) showing what appears to be people going from Flint to Wheeler before making the right turn onto Broadway. As in the stop for people coming off of Flint was on Wheeler, not on Flint. Just a guess. Although, based on that same dark-pattern observation, it looks like they may have been driving over that north sidewalk too – so I might be way off.

Broadway was also a 2-way street, not a one-way.

Seeing those streetcar tracks make me sad. The sooner our love affair with the low occupancy vehicle ends…the better.

My first thought exactly. When I looked at that photo, the first thing I thought was, what a shame so many amazing, solid, useful buildings that would have been worth millions today had to be bulldozed for a freeway.

Why not turn Wheeler into an actual dead-end cul-de-sac and have Flint cut across the concrete peninsula at curve mimicking the I-5 off-ramp? That way cyclists could avoid a stop from Flint onto Broadway while having plenty of physical space to observe whether to yield to other users in the approaching restricted lane?

I looked in my rearview mirror while driving and my polarized sunglasses made the entire street behind me bike-box green! Freaked me out! Maybe that’s what this intersection needs.

It needs a traffic circle!

… with yield signs not stop signs (if you don’t state that in Portland, you won’t get an actual roundabout).