“… it being the object and intent of this act to provide for pedestrians and bicycles a highway separate from that used by teams and horsemen.”— Excerpt from House Bill 63

The more I read about Oregon’s tenth governor, T.T. Geer, the more intriguing this man becomes.

As we shared back in 2009, Governor Geer was the man who put bicycling on the map in Oregon at the turn of the 20th century. He served as governor from 1899 through 1903 — right in the midst of what many consider the golden age of bicycling in America. Today I came across an email from reader Larry H. that included a PDF of a piece of legislation Geer pushed through in 1901 known as House Bill 63; also known as, “Oregon’s Bicycle Path Bill.”

I knew Geer was bike-oriented, but never realized just how broad his bike policies were until I read the text of HB 63 this morning. I found it fascinating. Many of the provisions included in the bill — a tax on bicycle riders, ongoing revenue for infrastructure, and so on — are things we are still debating 111 years later.

HB 63, which was approved by the Oregon Legislature on February 25, 1901, was an effort by Geer to do two major things: provide ongoing funding for building physically separated bike/walkways and to define the term “bicycle”.

The most important provision gave counties the authority to, “build, repair, and maintain paths on either or both sides of all public highways… for the use of pedestrians and bicycles.” And to pay for these new paths, the bill gave counties the option to levy a “license tax” of $1.00, “to be paid by any and all persons riding a bicycle.” One interesting stipulation is that Geer’s legislation allowed the “license tax” to be levied only after the new paths had been built (or promised to be built). 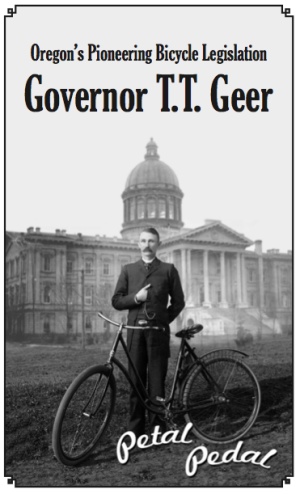 Image from a GeerCrest Farm brochure.

The bill stated that the tax was to be paid by, “any and all persons riding a bicycle in such counties as have exercised the authority above described on said paths as hereinafter provided.” The bicycle license tax fund would then be used to build and maintain the paths.

Not only did his bill call for a tax, but the courts were mandated to “provide a suitable tag” as a receipt that the fee had been paid. The tag needed to be purchased annually and had to be “properly and securely fastened on the seat post of each and every bicycle.” If someone was caught without a tag, the sheriff could seize and sell the bike. Here’s the actual text:

“… sheriff shall have power and authority to seize and sell as upon execution any bicycle for the amount of said license tax, together with costs and expenses of such seizure and sale, or may collect the same out of any property of said delinquent in the same manner as other delinquent taxes are collected.”

Geer also included language as to how the paths should be constructed. He clearly foresaw them as physically separated paths, much like the cycle-tracks we build today. “All such paths shall be constructed in such a manner that they will not interfere with any road, street, or crossing,” reads the bill:

The bill also sought to protect the paths and its users. Geer made it a misdemeanor to “injure or deface said paths” or to “place tacks, glass, wire, iron, sticks, stones, or any other substance upon said paths whereby the safety of the paths is imperiled or injury to the bicycle or any part thereof, or to the rider, or the pedestrian, result or is liable to result.” There was an exception for livestock, “providing the loose stock is not wantonly driven upon said paths and due care is taken to prevent injury to said paths.”

Punishment for violating this provision would result in a fine of no less than $10.00 or five days imprisonment, or both (“in the discretion of the court”).

“Bicycles,” as used in this act, shall be deemed to include bicycles, tandems, quads, etc. A “bicycle” is a vehicle propelled by a rider by foot power.”

And, just for good measure, the ninth and final section of House Bill 63 made it Oregon law that bicycles must have bells and lights. The light provision didn’t specify front or rear (like it does now), only that the bike is visible “at night with sufficient light to be easily distinguishable.” Punishment for not having a bell or lights could include a minimum $5 fine, three days in jail, or both.

I sure would have liked to meet Governor Geer. If you want to learn more, stop by the GeerCrest Farm & Historical Society just east of Salem, browse our “history” story tag, or grab a copy of the Oregon History Comics (which includes an excellent book on bike history).

Bring back the bike lanes on SE Stark and SE Division!

Those were the main eastside bike routes in Geer’s day.

And here we are today, still sharing highways with horsemen!

Tangentially related: Oregonlive commenters are finally placing blame where its due: Portland has some of the most unsafe drivers in the United States.

And what was the situation with automobiles and licensing/registration fees at that time?

There were less than a million cars and other motor vehicles in the US at the time as cars were made one at a time by hand until mass-production was adapted to motor vehicles about the time of the first WW. Cars and drivers were not licensed until 1910 in NJ and 1920 in the rest of the country.

Amazing and inspiring.
I wonder if the absence of a mention of rear lights had to do with the fact that at the time bikes would probably have been the fastest conveyance on many roads and as such a front light would be more useful to both the rider and to others he might encounter. Taillights, after all, are going to be more useful to those who might overtake or come upon a bicycle from behind.

“Nice to see America can solve a problem, move on, and never have to revisit it.”

…Do you mean the danger of horses and their manure on the public right of ways?

“Punishment for not having a bell or lights could include a minimum $5 fine, three days in jail, or both.”

Where do I sign the petition? And, no, I’m not accepting the bike lanes as satisfying the standard (nor do sidewalks). I’ll gladly pony up my fee AFTER the bikeways are built.

Do know that the image of Geer in front of the Capitol with the step-through is Photoshopped – a composite image. Gus did a very nice job with it, but it’s not an authentic vintage image.

HB 63 was a replacement necessary because the Oregon Supreme Court had found problems with some of the language in SB 143, which they struck down. One of the problems was that it was a tax, and so the language was changed to be a “license.”

(Legal and tax historians should look up Ellis v. Frazier 38 OR 462, 63 Pac 642 for more on this. Ellis had his bike seized for non-payment, and he wasn’t happy about this.)

Maintenance of the mainly graveled paths was a huge problem, and each winter’s rains washed out a lot of the path system. The licensing scheme didn’t account for maintenance costs.

As for the fees, collection of the fees was also a problem and there was never a way to make it equitable and effective. By 1905 most of the paths were abandoned, and in the early 19-teens they seem to have been forgot. Elsewhere, they were abandoned even earlier. Marion County didn’t resume path-building and license collections after Ellis v. Frazier struck down the first law – there were accusations, too, that the Sheriff wasn’t using the funds properly. In Multnomah County, payment of the tax/license declined precipitously each year, and it was not possible to enforce the law.

@Matt – there was no automobile licensing at this time, as the first auto came to PDX in 1899 and there were but a handful of them.

For more on the end of the paths see here.

Thanks Jonathan for the story and thanks for Eric for more info.

This should be the base of the conversation about licensing bikes! I would completely support something like this! Of course the fees and lighting part probably should be updated to today’s standard. (higher fees and at least I think, lights on front and back of bike.)

what kind of bike lights did they have in 1901?

Step-through frames are not “girl’s bikes”.

I dimly recall registering my bike and being issued a license to attach to the bike in Santa Rosa, CA., in the 50’s. I do not remember what the fee, if any, was. Anyone (among the seniors in the crowd) have similar experiences/memories?

I rode Rapsody (Tacoma Shelton Olympia Tacoma 170 miles) over last weekend and a big portion was on the Chehalis Western Trail for around 12 miles, from North of Olympia down to Yelm. I personally find bike paths occupied by children with training wheels, pedestrians (sometimes walking against traffic), dogs, horses, rollerbladers etc incompatible with cyclists.

There’s no centerline and no rules of the road. So honestly except in the most over crowed urban scenarios I’ll take roads any day. Roads admittedly need to be better engineered, but at least I know I won’t be running over someone, particularly a 4 year old child. I don’t think I could live with myself if I did that. I do not find bike paths to be the panacea everyone else seems to. I’m not trying to be a contrarian, but there must be some downside to the bike paths that isn’t being discussed.

What you are describing isn’t a “Bike Path” it is a MUP. A real “Bike Path” has sidewalks like any other road to keep pedestrians from walking in front of moving vehicles. Also a centerline to divide traffic into directions, etc.