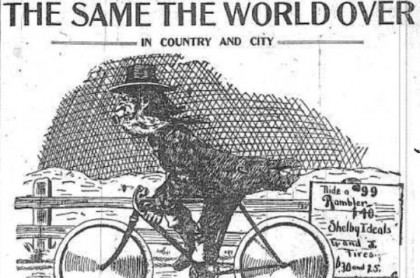 An 1899 newspaper ad for a Portland bike shop, from a
presentation by local bike historian Eric Lundgren.

The first issue of The Morning Oregonian in 1895 included an article that holds up wonderfully well.

It was published one year before the first organized bicycle recreation association formed in Portland; two years before 800 local donors crowd-funded the city’s first dedicated bike path on North Williams and Vancouver Avenues; four years before Oregon governor-elect T.T. Geer bought a bicycle of his own and led the charge for road improvements through the state.

And 119 years later, this short case for the merits of biking still feels like the perfect way to kick off a year of progress.

“… it being the object and intent of this act to provide for pedestrians and bicycles a highway separate from that used by teams and horsemen.”— Excerpt from House Bill 63

The more I read about Oregon’s tenth governor, T.T. Geer, the more intriguing this man becomes.

As we shared back in 2009, Governor Geer was the man who put bicycling on the map in Oregon at the turn of the 20th century. He served as governor from 1899 through 1903 — right in the midst of what many consider the golden age of bicycling in America. Today I came across an email from reader Larry H. that included a PDF of a piece of legislation Geer pushed through in 1901 known as House Bill 63; also known as, “Oregon’s Bicycle Path Bill.”

I knew Geer was bike-oriented, but never realized just how broad his bike policies were until I read the text of HB 63 this morning. I found it fascinating. Many of the provisions included in the bill — a tax on bicycle riders, ongoing revenue for infrastructure, and so on — are things we are still debating 111 years later. 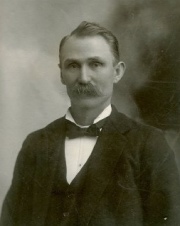 Remember Oregon’s tenth governor, Theodore T. Geer? He’s the great Oregonian who, in May of 1900, rode his bike from the capital in Salem to Champoeg to establish a monument to an historic vote that took place there in 1843. That vote paved the way to Oregon statehood and the monument stands today as the focal point for the Champoeg State Heritage Area.

To honor that ride and Governor Geer’s role in the founding of Oregon, the State of Oregon Parks and Recreation Department is organizing a bike ride that will retrace his route. The inaugural “Governor’s Ride 2012,” will be part of Champoeg’s annual “Founder’s Day” festivities (which have taken place at the monument since 1901).

Local author and historian Eric Lundgren — who previously shared his research on Portland’s first “Cycle Park” — will speak on the topic of Portland’s bike history this Friday (11/30) at Portland State University.

Lundgren says his talk will take a spin into our bikey past, to a time over a century ago, when Portland was building a network of dedicated bicycle paths. Here’s more from the event notice: