Our present road laws, taken as a whole, amount to a mere travesty on the object for which they were intended. They are the result of haphazard, patchwork legislation from session to session, usually amendatory of previous acts that were themselves mere apologies for existing conditions.

The roads were deep in mud in the winter, dusty in the summer, smelly from livestock droppings all the time. 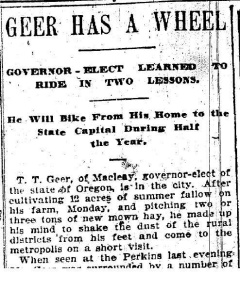 Geer rode a bicycle. On Geer’s passing in 1924, Circuit Court Judge George Tazwell recalled that “We met on the road many times and often rode together.”

In the late 1890s Geer lived on a farm on a hill just above Macleay, about 8 miles from the Capitol. In June of 1898 his purchase of a “wheel” was headline news.

It is not the intention of Mr. Geer to make Salem his home when he becomes the chief magistrate of Oregon. He will still live on his farm, and intends, for six months in a year, to make the trips to and from the state capitol awheel.

The next spring, on February 14, 1899, Oregon’s birthday, he ordered a new Rambler from Fred. T. Merrill, Portland’s largest bicycle dealer. Merrill later featured the order in print advertising as a kind of celebrity endorsement. (Whether Geer authorized this is not known!)

Geer’s most famous ride occurred in May of 1900. The Oregon Historical Society was newly formed and wished to gather information on important places around the state. Geer was tasked with locating the site of the 1843 meeting that established the Provisional Government for the Oregon Territory. On May 1 he bicycled through French Prairie to meet the only surviving member of the meeting, F.X. Matthieu.

In his 1911 memoir, Fifty Years in Oregon, Geer wrote about this ride:

I shall never forget that beautiful ride from Salem to Champoeg. It was a perfect day, with a firm north breeze, not a cloud in the sky; the roads were in good condition, the crops were growing splendidly, birds were singing everywhere, seemingly to be in harmony with Nature’s glad mood – it was, in short, just that sort of day which is known in all its wealth of joy, beauty, and inspiration only in the Willamette valley in the spring and summer months.

During his administration people weren’t yet ready for comprehensive road legislation. Unable to pass it, on February 18, 1899 Governor Geer signed Oregon’s first Cycle Path legislation, creating a network of side paths for bicyclists and pedestrians. In the urbanized counties in the state, bicyclists paid into a fund that created side paths along county roads. These paths were graded and graveled and used new road building technologies. In almost every case they were much better than the parallel roadways, and the owners of carts, wagons, buggies, and livestock preferred them. Those that used the paths illegally could be arrested and fined. 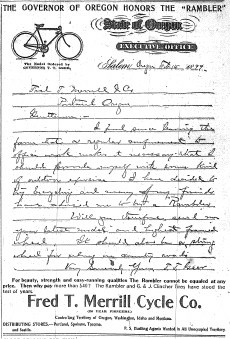 Geer was the first “native son” elected Governor of Oregon. His uncle, Ralph Carey Geer, and father, Heman J. Geer, were early pioneers, arriving in 1847. His mother, Cynthia Ann was an Eoff, another of the 1847 pioneers. The most famous member of the family is the cartoonist Homer Davenport, who was a cousin.

Geer was born on a farm in the Waldo Hills above Salem in 1851 and in 1880 was elected to the Oregon House. In 1891 he served as Speaker of the House and campaigned for William McKinley during the Presidential Election of 1896. He was elected Governor in 1898.

After his political career and a brief newspaper stint were over, Geer moved to Portland and was president of the Rose City Park Improvement League, a group of boosters and developers in Rose City Park. He died at his Rose City Park house in 1924.

Today Geer is best known for being Governor when the first amendment to the Oregon Constitution was passed, the start of the “Oregon System” of initiative and referendum. As great as Governor McCall was, Governor Geer should have a special place in the heart of bicyclists for being Oregon’s bikey-est Governor.

Thanks for the fascinating article!

As a side note, GeerCrest farm still exists, on a hill outside Salem. I am guessing this farm is either where T. T. Geer was born — it was established in 1848 by Ralph and Mary Geer.

I love the word awheel. Gonna be using that one.

So owners of carts, etc, used the cycle paths as they were better constructed. One wonders if cyclists of the time yelled at them to “get on the road, where you belong”.

Yes, Geercrest farm is the one! Whenever I bike by it, and by the site (no longer active like Geercrest) of T.T. Geer’s own farm on State street a few miles southwest of Geercrest, I stop and do a little bike puja.

The next piece will include a story about a cart driver who used a cycle path illegally and what happened in court.

Hey Eric,
Great Article.
I lead a ‘History of Portland’ Pedalpalooza ride last June with historians Anjala Ehelebe and Peter Chausse. I’m planning another history tour this June. It would be great to have you on the ride…

Dang, I wish someone would hurry up and invent the time machine.

Great article. Thanks for posting it.

nice story. I will think of our “bikey-est” governor while utilizing all the bike lanes I can on Wednesday in commemoration.

Great stuff…how lucky is Oregon to have our own “cycling historian”? (Not to mention that he’s both a historian of cycling and a historian who cycles.) Just one more way bikes are quickly taking a starring role in our city and state.

That was such an interesting article! Can’t wait for more on Oregon’s cycling history! 🙂

As a distant member and genealogist of the Oregon Geer family, thank you for the story about TT, our favorite governor! Just found it this week…

Hi Barbara! We must be relatives! Have you visited the Geercrest estate in Silverton? We’re going tomorrow and hope to see some amazing history –